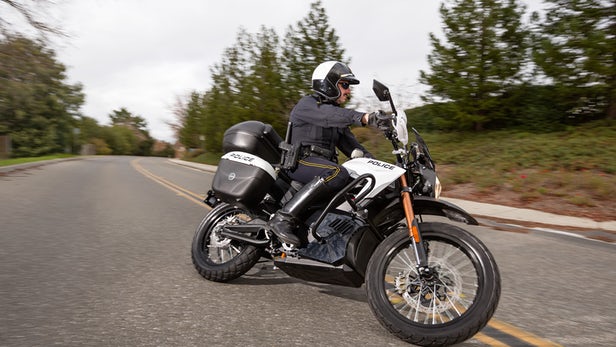 Police around the world have begun to purchase electric motorcycles since they proved their strength in everyday use. The most prominent of these brands is the American Zero Motorcycles, which announced recently that more than 60 US public service agencies, including army and police, rely on electric motorcycles.

It started between 2012 and 2013, when two police departments bought the Zero electric motorcycles and installed police lights and horns, which made the company focus on selling its products to the public sector and start enhancing its motorcycle’s capabilities for military use.

The number of police stations relying on electric motorbikes increased to 50 units, so the company provided a special military use bikes with range of 285km per a charge and a top speed of 155 km/h.

It was rumoured that a police officer a few months ago stopped a Tesla car on a Zero electric motorbike and posted the picture on social media captioned: the quieter police chase at all, to ridicule the fact that the two vehicles made no noise at all.

The military use model includes the DSRP and FXP for police use, while the army relies on the MMX model.

Zero is one of the American emerging companies in field of vehicles, established by a former NASA engineer in 2006 in Santa Cruz, California. It was known before as Electricross. The company’s investments have now reached $250m, to become the world’s largest electric motorbike manufacturer in the world.