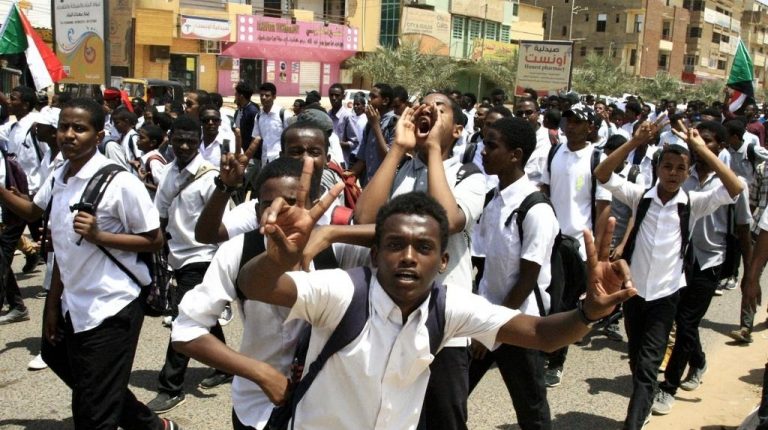 A Sudanese Court postponed on Wednesday the first session of the trial of ousted President Omar Al-Bashir. No new trial date has been set.

The decision came due to the death of Al-Bashir’s mother on Tuesday, as well as security conditions in the country.

Moreover, Sudanese authorities ordered on Tuesday all schools nationwide to suspend their classes and close their doors from Wednesday.

This came after crowds of students launched demonstrations against the killing of six protesters including five students at a schoolchildren’s rally on Monday against a shortage of bread.

On Tuesday, hundreds of children, several dressed in their school uniforms and waving Sudanese flags, took to the streets of Khartoum to protest against the killings in Al-Obeid. The Demonstrations continued in other parts of the capital and in other cities.

“Orders have been given to governors of all states to shut kindergartens, primary and high schools from tomorrow (Wednesday) until further notice,” the official Suna news agency reported.

Monday’s schoolchildren protest came a day before protest leaders and the ruling generals were expected to hold talks. The killings led the protest leaders to call for a suspension of talks with the generals and thousands of students took to the streets to denounce the death of students.

Also, the head of Sudan’s ruling military council, Abdel Fattah Al-Burhan, condemned on Tuesday the killing of five schoolchildren in the north Kordofan city of Al-Obeid at a rally, describing it as “unacceptable”, and ordered an immediate and deterrent accountability for those responsible for the killings.

Sudan’s ruling military council and an alliance of opposition groups, signed the first of two documents of a power-sharing deal that activists hope will pave the way for democracy in the country. The two sides inked the “Political Declaration” in Khartoum in the presence of the African Union and Ethiopian mediators.

Sudan has been in a state of flux since the former president Omar Al-Bashir was ousted in April after large-scale protests against his regime.