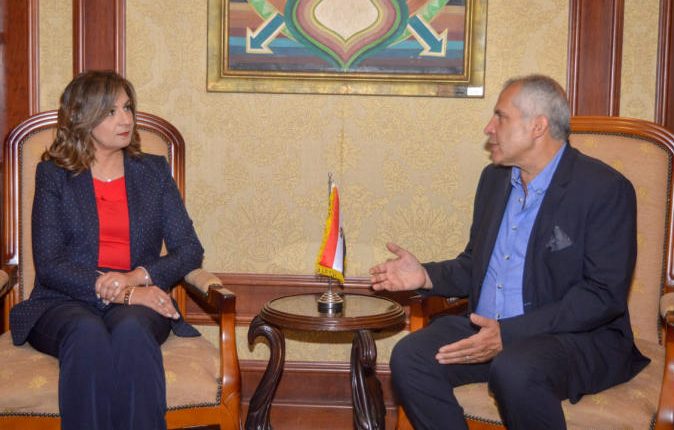 Egypt’s Minister of Immigration and Egyptian Expatriates, Nabila Makram, received on Tuesday Hassan Salama who was subject to assault while traveling on board TAROM flight which is the flag carrier and oldest currently operating airline of Romania.

Makram received Salama came in the wake of a viral video that stirred up Egyptians’ anger on social media, showing an Egyptian national passenger treated harshly by Romanian security guards onboard a flight coming from Bucharest to Cairo.

Salama and his family were violently thrown off the flight in Romania. The incident took place in the middle of July when Salama’s flight was transiting in Bucharest, Romania’s capital, while en-route to Egypt from Paris, where the family resides. A footage of the altercation went viral on social media.

After a quarrel broke out between the Egyptian passenger and the flight crew, security forces from Bucharest airport interfered and handcuffed Salama, forcing him to get off the airplane, according to the video published on social media.

Makram assured Salama that the Egyptian state supports him and that the ministry is closely following up his case to endure he gets his full rights and to prevent repeat of such actions with other Egyptians.

“The ministry has contacted the international lawyer Khalid Abu Bakr to help the assaulted Egyptian to file a lawsuit against TAROM due to the moral and financial damages that he and his family faces,” a Wednesday statement read.

“Although my wife changed her seat, the security forces forced us to leave the plane, cancelling our visas. I was taken by police car to the detention room at the airport and was handcuffed for three hours. At the same time, my wife was in diabetic coma and was taken to the hospital with my son,” he explained.

Salama confirmed that the Romanian airline canceled the tickets back to Cairo, stating that he could not find any reservation on a plane bound for Egypt, which led him to go to a hotel in Bucharest, then his daughter managed to book tickets through her friends in Turkey.

Polish minister pops 'what if' question over US gas plans