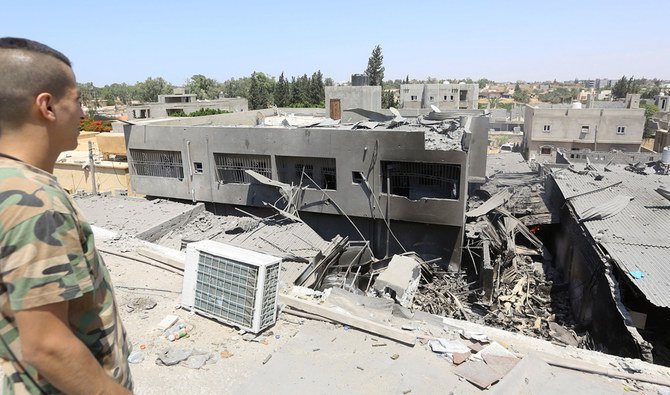 The Libyan National Army (LNA) claimed responsibility for the airstrike that allegedly targeted a field hospital in Tripoli, killing five doctors and injuring eight others.

“On Saturday, we carried out an air raid on a field hospital in southern Tripoli that was used as a shelter by terrorist elements,” LNA spokesperson Ahmad Al-Mesmari told the Libya-based Al-Hadath TV channel.

He justified bombing the facility, saying it has been used by “terrorists”, claiming that the victims of the raid were “medical students, not doctors, and some of these people were imprisoned for terrorism in the 1990s and others belonged to the Muslim Brotherhood extremist group.”

On Sunday, the Government of National Accord (GNA) has accused the LNA of raiding the hospital.

On the same context, Italy’s Interior Minister and Deputy Prime Minister Matteo Salvini condemned the attacks. He said that the raid was carried out by “rebel” forces on civilian targets in, what he described as, war-wracked Libya including hospitals and airports, according to the Italian news agency (AKI).

“Whoever fuels the war in Libya, hates Italy and Europe, and is threatening the security of the entire continent,” Salvini said.

The battle between rival power seats for control of Tripoli since April has left at least 12 health personnel dead, over 30 people injured, and 20 ambulances directly or indirectly impacted by at least 38 attacks on medical facilities, according to the UN.

Commenting on the ongoing clashes, US Ambassador for UN Management and Reform, Cherith Norman Chalet, said on Monday that fighting in Tripoli allowing “the terrorists to regroup, which [is] threatening the stability of Libya’s oil production and worsening the humanitarian situation.”

She also called, in a tweet, upon both powers in Libya to cooperate with the UN Support Mission in Libya to achieve a political solution.

Earlier, the UN also called for ceasefire in Libya during the Eid Al-Adha holiday as per statements by the UN envoy in Libya, Ghassan Salamé, on Monday.

Salamé has made remarks on the situation in Libya, saying that the armed conflict in Libya shows no signs of abating, adding that the geographical scope of the violence has also spread.

He also asserted that Libya has become “a terrain of experimentation of new military technology and recycling old weapons.”

However, the GNA and its allies turned down the UN calls for a truce.

The official website of the GNA said that Salamé’s remarks has raised doubts about the neutrality of the UN mission, adding that the GNA is to address UN members on the “inaccuracies” in Salamé’s briefing.

“There are no mediators to end the war,” head of the Presidential Council, Fayez Al-Sarraj, said in an interview with the Russian news agency Sputnik on Tuesday, adding that “the war will end with the defeat of the aggressor.”

Meanwhile Giuseppe Buccino, the Italian ambassador in Libya, said that the road is still difficult for Libya. He told the Corriere della Sera newspaper on Tuesday that the conflict is continuing and that there is a little prospect of reaching an agreement between the LNA and the GNA.