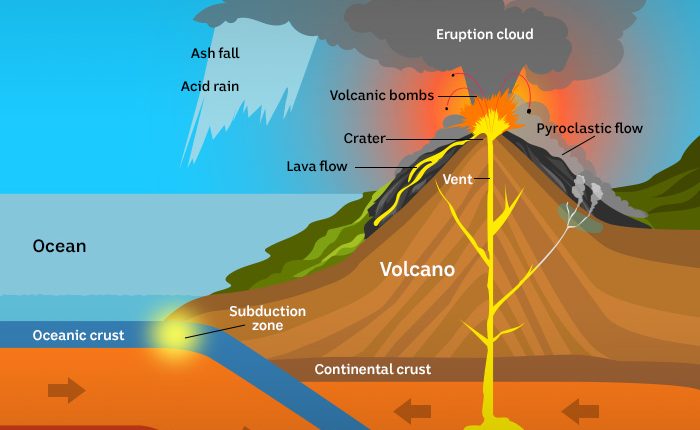 Every time we see an eruption of a volcano on TV or the internet, we notice that the magma shoots right out of its top. However, it is not so uncommon that the magma erupts from the volcano’s flank rather than its summit. After leaving the underground magma chamber, the magma forces its way sideways by fracturing rocks, sometimes for tens of kilometres.

Then, when it breaches the Earth’s surface, it forms one or more vents from which it spills out, sometimes explosively. This, for example, occurred at Bardarbunga in Iceland in August 2014, and Kilauea in Hawaii in August 2018.

It is a big challenge for volcanologists to guess where magma is heading and where it will breach the surface. A lot of effort is spent on this task as it could help minimise the risk for villages and cities endangered by eruptions. Now, Eleonora Rivalta and her team from the GFZ German Research Centre for Geosciences in Potsdam, together with colleagues from the Roma Tre University and the Vesuvius Observatory of the Italian Istituto Nazionale di Geofisica e Vulcanologia in Naples have devised a new method to generate vent location forecasts. The study is published in the Science Advances journal.

“Previous methods were based on the statistics of the locations of past eruptions. Our method combines physics and statistics: we calculate the paths of least resistance for ascending magma and tune the model based on statistics,” says Rivalta, the first author of the paper.

The researchers successfully tested the new approach with data from the Campi Flegrei caldera in Italy, one of the Earth’s highest-risk volcanoes, and it often looks like a lawn covered in molehills.

Vents opened at the flank of a volcano are often used by just one eruption. All volcanoes may produce such one-time vents, but some do more than others. Their flanks are punctured by tens of vents whose alignment marks the locations where subsurface magma pathways have intersected the Earth’s surface.

At calderas, that is large cauldron-like hollow that forms shortly after the emptying of a magma chamber in a volcanic eruption, vents may also open inside and on its rim. That is because they lack a summit to focus eruptions. “Calderas often look like a lawn covered in molehills”, said Rivalta.

Most vents at calderas have only been used once. The resulting scattered, sometimes seemingly random spatial vent distribution threatens wide areas, presenting a challenge to volcanologists who draw forecast maps for the location of future eruptions. Such maps are also necessary for accurate forecasts of lava and pyroclastic flows or the expansion of ash plumes.

Vent forecast maps have so far been mainly based on the spatial distribution of past vents: “Volcanologists often assume that the volcano will behave like it did in the past”, Rivalta noted, adding that the problem is that often only a few tens of vents are visible on the volcano surface as major eruptive episodes tend to cover or obliterate past eruptive patterns. Hence, as mathematically sophisticated as the procedure can be, sparse data leads to coarse maps with large uncertainties. Moreover, the dynamics of a volcano may change with time, so that vent locations will shift.”

That is why Rivalta, a trained physicist, together with a team of geologists and statisticians, used volcano physics to improve the forecasts. “We employ the most up-to-date physical understanding of how magma fractures rock to move underground and combine it with a statistical procedure and knowledge of the volcano structure and history. We tune the parameters of the physical model until they match previous eruptive patterns. Then, we have a working model and can use it to forecast future eruption locations”, Rivalta said.

The new approach was applied in southern Italy to the Campi Flegrei, a caldera close to Naples, which has a population of nearly one million. In the more than 10 kilometres wide caldera, about 80 vents have fed explosive eruptions in the last 15,000 years. The approach performs well in retrospective tests, that correctly forecast the location of vents that were not used to tune the model, the researchers report.

“The most difficult part was to formulate the method in a way that works for all volcanoes and not just one – to generalise it”, Rivalta explained. “We will now perform more tests. If our method works well on other volcanoes too, it may help planning land usage in volcanic areas and forecasting the location of future eruptions with a higher certainty than previously possible,” the author noted.

We really don’t know clouds at all