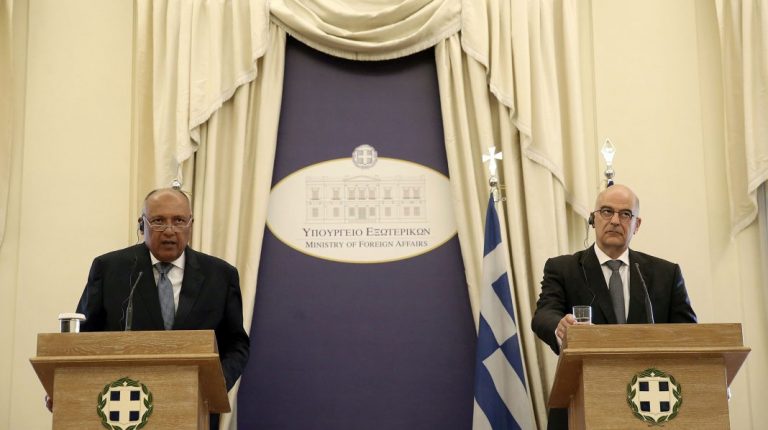 Shoukry expressed Egypt’s willingness to further strengthen the already very strong relations between the two countries and emphasised cooperation in the political, economic, military, and energy sectors to serve the interests of both countries. .

During a press conference, Shoukry spoke described his meeting with Dendias as very successful and underlined the big role that Greece and Egypt can play in the region.

Finally, Shoukry said that Egypt is looking forward to hosting a trilateral meeting of Greek, Egyptian, and Cypriot leaders this year and has already invited the Greek Foreign Minister to visit Egypt.

“We attach particular importance to strengthening the already very good cooperation with Egypt, which is also a basis for the future. Both sides emphasise the best use of energy resources. We seek to create the best conditions for this,” said the Greek FM during the press conference.

Dendias added that, at the regional level, the two sides also discussed, the blatant violation of the sovereignty and rights of the Republic of Cyprus exercised by Turkey.

He stressed that Turkey’s illegal actions defy international law, endangering the security of the region, “They are, therefore, absolutely doomed.”

The Greek FM expressed the satisfaction of the new Greek government for the responsible and clear attitude Egypt has taken in this matter.

“We live in a very volatile region, and the systematic violation of international law, the law of the sea and the good neighbourly relations by Turkey is exacerbating the challenges in our region,” he stressed.

Continuing, Dendias said: “Further, I would like to emphasize the important mediating role played by Egypt in promoting the Peace Process, intra-Palestinian reconciliation, stabilizing the situation in Libya and combating international terrorism.

Later, Shoukry will head to Cyprus as he will meet President Nicos Anastasiades and Foreign Minister Nikos Christodoulides.