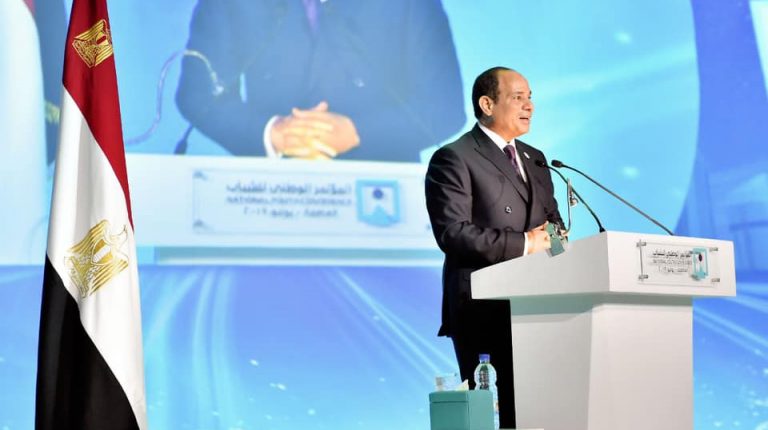 All citizens’ data collected by the state are strictly confidential, and they could only be disclosed just for security reasons, President Abdel Fattah Al-Sisi affirmed on Wednesday.

Al-Sisi outlined that having a country-wide database is a matter of national security and will be tackled with high confidentiality.

The president’s remarks came during a session on the digital transformation within the state services in the second day of the 7th edition of the National Youth Conference held in the New Administrative Capital, which kicked off on Tuesday, titled “Innovate, Start”.

During the session, ministers reviewed the government steps to automate and digitalise public services.

The topic of ration cards has also been raised during the session. Commenting on the issue, Al-Sisi asserted that the government has not excluded any eligible citizens from the subsidised food items in ration cards system, but it excluded the ineligible card holders.

Minister of Supply and Internal Trade, Ali Moselhi, explained that there were 79 million citizens, but when the ministry checked, it found repeated names and other fake IDs. Moselhi added that they decreased the number from 79 million cards to 71 million.

The conference also witnessed launching of the government initiative, dubbed “A Decent Life,” by Al-Sisi in January to provide better living conditions for underprivileged people.

Al-Sisi said that the state could not cover all expenses needed to fulfil the targets of the initiative, consequently, the NGOs and Egypt Tahya Misr (Long live Egypt) Fund has taken part. About EGP13bn is the cost of improving 277 villages in Egypt, the president said.

On Tuesday, Al-Sisi revealed some details before proceeding in the government decision to float the Egyptian pound in November 2016. This came during a session titled “The Simulation of Egyptian State”.

The decision was followed by a series of economic reforms as part of a $12bn IMF loan agreement signed in the same year.

Al-Sisi disclosed that government officials were concerned about the people reactions. “But I said no, I am not commending myself, and at that time, I called upon the government to prepare for resignation. If people refused the economic reforms. I would quit and call for early presidential election to transfer the power for someone else” Al-Sisi revealed.

“After five years and thanks to the sacrifices of the Egyptians, we are in a (better) situation,” Al-Sisi noted, adding that Egypt was about to collapse and Egyptians were disappointed and desperate to get a better future.

Al-Sisi pointed out that the economic reforms came during a hard-time for the country, as Egypt has been through two uprisings almost in three years.

On the other hand, Al-Sisi outlined that about five million Egyptians have been working in the state national infrastructure projects in several governorates.

Egyptian state had not taken real economic reforms over the past 40 years because it feared the reaction of the people, Al-Sisi said.

More than 1,500 youth from 27 governorates took part in the conference. The participants are from political parties, universities, PLP, and various social segments.

The conference’s agenda includes a simulation model on the first day, besides the first conference of the state-sponsored Decent Life initiative.