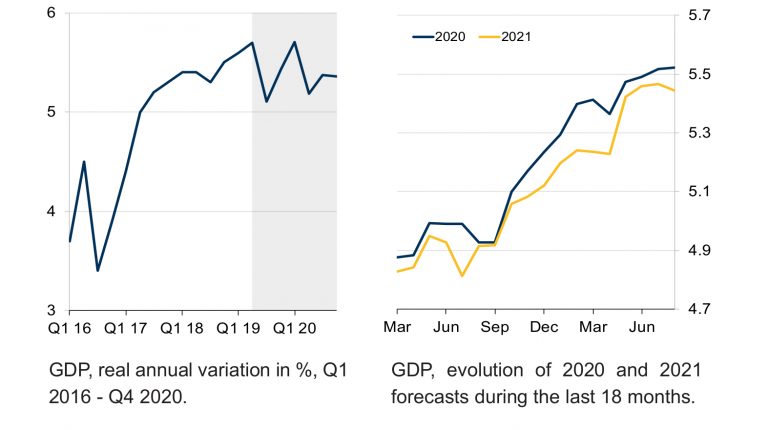 Focus Economics added in its report in August that the economy should broadly maintain its momentum in FY 2020, which started in July, as it reaps the rewards of the government’s market-friendly reforms, and is supported by strong government investment spending and a tighter labour market. However, still-fragile government finances, an uncertain global trading environment, and recurring security problems weigh on the outlook.

“It explained that the annual economic growth accelerated in the fourth quarter (Q4) of FY 2019, which ran from April to June. The acceleration appears to have been supported by strong fixed investment, thanks to the government’s ongoing infrastructure drive, and healthy private consumption, buttressed by a recent drop in the unemployment rate,” it stated.

Moreover, the Africa Cup of Nations, which ran in June-July, should have boosted exports of services. Meanwhile, at the start of July, the government cut energy subsidies as part of agreed-to reforms under its three-year financial support programme with the IMF.

Notably, the government was granted on 24 July the final disbursement of $2bn from the total

$12bn available under the IMF programme. With the programme now complete, the IMF urged the government to continue building a market-based economy in the future.

Regarding inflation, Focus Economics stated that inflation tumbled to 9.4% in June from 14.1% in May, closing in on the midpoint of the CBE’s Q4 calendar year (CY) 2020 target range of 9.0% plus or

“Inflation is seen accelerating again from July due to the energy subsidy cuts, although the recent appreciation of the pound should feed into prices and moderate any uptick. Our panellists expect inflation to average 12.1% in CY 2019, which is down 0.3 percentage points from last month’s forecast, and 9.7% in CY 2020,” Focus Economics revealed.

At its most recent monetary policy meeting on 11 July, the CBE left the overnight deposit rate at 15.75%. The decision came on the back of concerns that inflation could accelerate, after slowing in June, due to subsidy cuts.

“The next meeting is set for 22 August. Looking ahead, most panellists see some monetary easing by year-end. Our panellists expect the overnight deposit rate to end CY 2019 at 14.42% and CY 2020 at