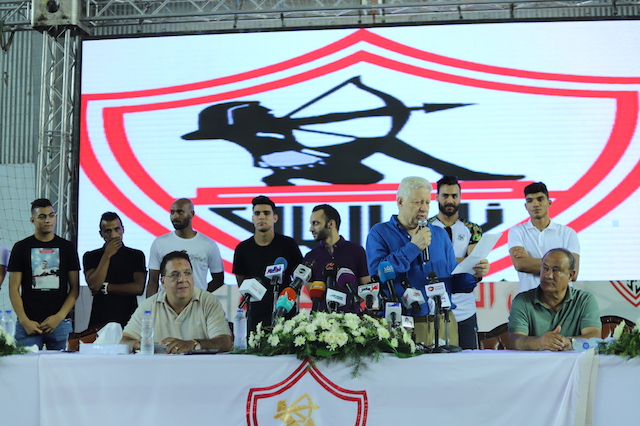 Zamalek announced 10 new signings at a press conference held on Wednesday in preparation for the team’s campaign in the CAF Champions League, in which they will face Dekedaha FC of Somalia in the preliminary round of the tournament, as well as the CAF Super Cup game that will be held in the UAE on 16, 17, or 18 August.

Mortada Mansour, the club’s president, announced they are negotiating with three coaches to lead the team in the coming season, replacing Khalid Galal who was sacked after losing the league title and the derby game against Al Ahly last week.

Earlier on Wednesday, the Court of Arbitration for Sport rejected Morocco’s Wydad Athletic appeal to replay the 2019 CAF Champions League final against Esperance, confirming the Tunisian side as winners of the edition.

The second leg of the Champions League final on 31 May was controversially abandoned by Wydad after the club’s players took issue with the faulty VAR system. As a result, Esperance were initially declared champions on the evening but CAF later made an about-turn and ruled that the second-leg should be replayed at a neutral venue.