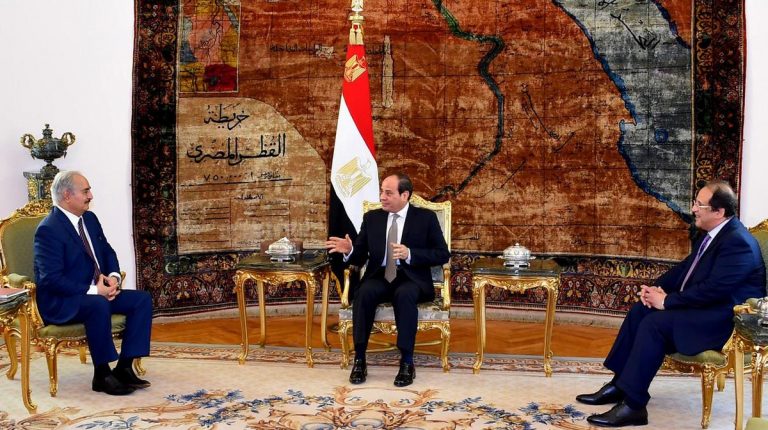 Egypt’s President Abdel Fattah Al-Sisi on Saturday met with the Commander of the Libyan National Army (LNA), Khalifa Haftar, in Cairo where they discussed the updates in Libya, according to Al Arabiya.

State-run MENA news agency said on Friday that Haftar arrived in Cairo, to discuss the latest situation in Libya, and border security.

Both officials discussed increasing security coordination between the two countries to adopt strict measures on the shared borders to prevent infiltration of terrorist elements and weapons smuggling between the two brother countries.

The source told Al Arabiya that the LNA will hand over a number of terrorist elements wanted in Egypt in the coming period.

The meeting also tackled the anticipated national dialogue in Geneva next week with the participation of the Government of National Accord (GNA), according to Al-Hurra.

The ongoing conflict between Libya’s two seats of power, LNA and GNA, around the capital Tripoli, causing what UN described as “tragic loss of human lives”, has evoked international concerns.

Last week, the UN envoy in Libya Ghassan Salamé called for a truce in the Eid al-Adha holiday.

Similarly, the European Union (EU) renewed calls for ceasefire in Libya. It called upon the conflicting sides to establish a permanent truce and return to UN-led talks to prepare for quick elections.

In July, the governments of Egypt, France, Italy, the United Arab Emirates, the United Kingdom, and the United States said in a joint statement that they reiterate their deep concern about ongoing hostilities in Tripoli, call for an immediate de-escalation and halt to the current fighting, and urge the prompt return to the UN-mediated political process.