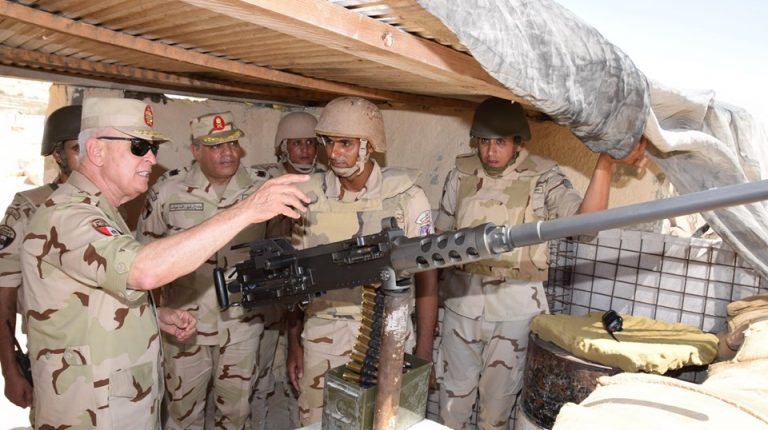 Lieutenant General Mohamed Farid, Chief of Staff of the Egyptian Armed Forces, inspected a number of security checkpoints and the permanent operations unit in North Sinai on Saturday.

Farif also visited the soldiers mandated with executing measures to besiege and eradicate militants, to express appreciation, boost morale, and follow up on updates on the round-the-clock military operations executed by the anti-terrorism forces.

On a different note, Egyptian Armed Forces managed to defuse18 Improvised Explosive Device (IED) and destroy two tunnels in North of Sinai during the last month, according to the armed forces statement on Friday.

The forces continue their efforts to counter criminal elements and smugglers who aim to harm the Egyptian national security, the statement said.

Furthermore, Egyptian Armed Forces confiscated 300 kg of Urea, a chemical compound which used in manufacturing of IEDs. In addition to nine guns and large amounts of ammunition.

Concerning destroying plantation of narcotics in Middle Sinai, the forces destroyed 63 weed farms on an area of 23 feddans.

Furthermore, the forces thwarted attempts of illegal immigration for 431 people of different nationalities. During the operation, the forces seized 90 vehicles and motor bike, 2 fishing boats used for smuggling and infiltration, 65 smugglers and outlaws who were transferred to the court to go through judicial formalities

Egypt has launched a comprehensive military operation in February 2018, dubbed “Sinai 2018”, to confront militants in Sinai, Nile Delta, and the Western Desert.