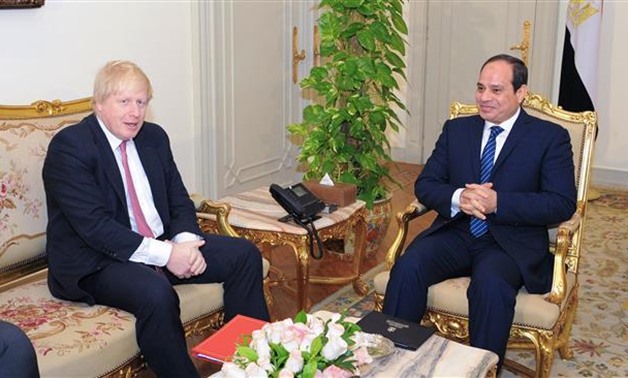 In Johnson’s first conversation with the Egyptian president since the former took office late July, the British official expressed his hope that the coming period will see effective steps to strengthen Egypt-UK ties, especially as UK is the largest foreign investor in Egypt, praising the achievements made by Egypt in the fields of economic and social development.

Johnson stressed that he is counting on Egypt’s pivotal role to keep stability in the Middle East, combating terrorism, and maintaining peace and security in Africa in light of Egypt’s current presidency of the African Union, , according to a statement released by Egypt’s presidency spokesperson Bassam Radi.

On 24 July, Johnson was elected as leader of the Conservative Party which paved the way for him to replace Theresa May as UK prime minister.

Starting his career as a journalist, Johnson moved from a newspaper to another facing some criticism for writing reports that were reportedly either exaggerated or untrue.

In 2001, he joined the UK parliament. From 2008 to 2016, he served as the mayor of London and in 2015 he joined the parliament again during the Brexit referendum where he supported UK’s place in the EU single market during his time as London mayor, however, he campaigned hard for the UK to leave the European Union. The apparent switch saw him criticized by some for political opportunism.

After the results of the Brexit referendum, in which Britain voted to leave the EU by 52% against 48%, Johnson was appointed as foreign minister by Theresa May, the country’s prime minister at the time.

The Brexit architect: What is David Cameron up to these days?