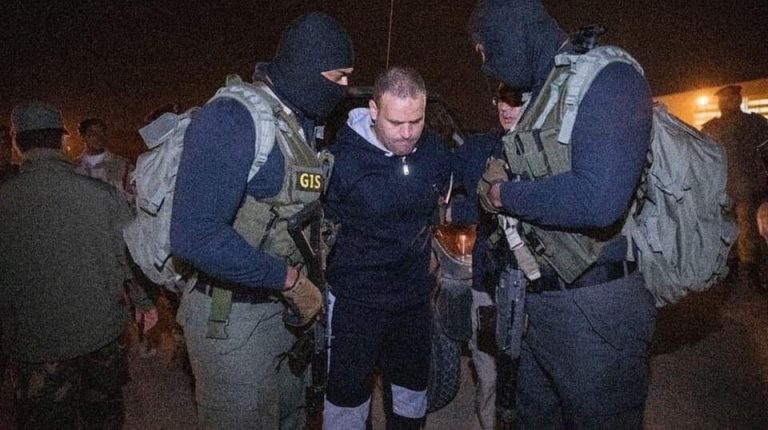 Egyptian authorities have been interrogating the country’s most-wanted terrorist Hesham Ashmawi recently after he was extradited from Libya, where he was captured, in May.

The army officer-turned-terrorist Ashmwai confessed he was recruiting physicians to be part of a militant group he was forming during the Muslim Brotherhood’s Rabaa sit-in in 2013.

Ashmawi said during the Rabaa sit-in, the outlawed Brotherhood leaders tried to persuade him to join the group. He pretended joining the Brotherhood to use the group’s youth in establishing his new militant group.

While Ashmawi was in the sit-in, many of the Brotherhood’s youth agreed to establish armed movements against the state, he claimed.

Investigations revealed that during his stay in Libya, Ashmawi had good relations with some Brotherhood members who helped him to transfer money to militants, specifically foreigners. Those foreign militants were also linked to the Brotherhood branches in their countries.

Ashmawi revealed the details of terrorist attacks against Egyptian churches and his relation with Wilayat Sinai, the Islamic State (IS) terrorist group’s branch in North Sinai.

There are foreign militants in Sinai, mostly coming from North Africa and Chechnya, Ashmawi claimed, adding that those elements were few in the beginning, but they were gradually increasing over time.

Those foreign militants joined the IS after undergoing allegiance tests, and they knew very well using weapons as some of them had military experience, Ashmawi revealed.

He said many foreign militants participated in the terrorist attacks in Egypt, namely the Karam al-Qawadis attack in Sinai. They have spread across Libya after the defeat of their groups’ in Syria and Iraq.

Ashmawi admitted that he was in charge of training the suicide bomber of the St. Peter and St. Paul Church attack, Mahmoud Shafiq Moustafa.

Moustafa, nicknamed Abu Dujana al-Kanani, was a member of Wilayat Sinai group, but Ashmawi did not want him to carry out the suicide attack, as he wanted to use him in other operations. Ashmawi wanted to take Moustafa with him to Libya, but Wilayat Sinai refused, according to the investigation.

Shadi al-Mani’i, an IS commander in Sinai, had a strong relation with Ashmawi. They were in same terrorist unit that were involved in many attacks targeting Copts in Sinai, the investigation revealed.

Ashmwai was arrested on 8 October 2018 in Libya as part of a wide-scale military operation conducted by the Libyan National Army (LNA).

According to a press statement by LNA, Ashmwai, the IS leader in the Libyan city of Derna, was arrested during a military operation by the army.

Ashmwai was born in 1978, and graduated in 2000 from the military academy, where he was considered a distinguished officer and joined the Sa’ka, an Egyptian military commando force. He served in Sinai for 10 years and witnessed the bombings of Taba, Sharm El-Sheikh and Dahab.

In 2005, he started to attend sessions for extremist groups held in mosques. As a result, Ashmawi received a warning from the Armed Forces in 2006 and was subjected to investigation. However, he asserted his commitment to the military rules.

In 2007, Ashmawi was transferred to an administrative post according to a verdict from a military court and then was referred to retirement in 2009. He was completely expelled from the army in 2012 because he travelled to Syria twice through Turkey.

After the 30 June uprising, Ashmawi appeared as a key militant figure who trains militants on the usage of weapons, carrying out suicide bombing missions, and killing conscripts.

In the wake of the failed assassination attempt of former Interior Minister Mohammed Ibrahim in May 2013, his name was mentioned a few times in local media.

The new ideology of the former officer led him to travel to Syria from Turkey in 2013 to fight against the Al-Assad regime. He then returned to Egypt to participate in the Brotherhood Rabaa sit-in against the ouster of late president Mohamed Morsi.

In 2014, Ashmawi became a leading figure of the IS branch in Egypt, which was known as Ansar Byat El-Maqdus at that time. He supervised most important attacks conducted by the group against the army and police forces based in Sinai and Al-Farafra oasis.

Ashmawi has been involved in several major terrorist operations including the attack on the military intelligence headquarters in Ismailia in October 2013, the bombing of the Security Directorate of Al-Dakahlia in December 2013, the bombing of Cairo Security Directorate in January 2014, the attack on a military unit in Farafra oasis in the Western Desert in July 2014, and the attack on the Armed Forces in Karm Al-Qawadis in Sinai in October 2014.

During the Farafra attack, Ashmawy was injured, he then was taken to Libya to receive treatment because of his close relation with al-Qaeda-affiliate Ansar Al-Sharia in Derna.

In October 2017, the Egyptian National Security received information on the presence of a militant group near El-Wahat El Baheria road, located between Giza and Fayoum, the information was collected from four detainees from the Qaluibyia governorate, the security forces headed to location where they faced a fierce militant attack from anonymous militants, the attack led to the death of 16 policemen.

At that time, the Interior Ministry did not clarify the identity of the militants, however, numerous local media reports, that quoted security sources, indicated that the perpetrators were from a new group in Egypt called al-Morabtoon that’s allied to al-Qaeda and formed by Ashmwai.