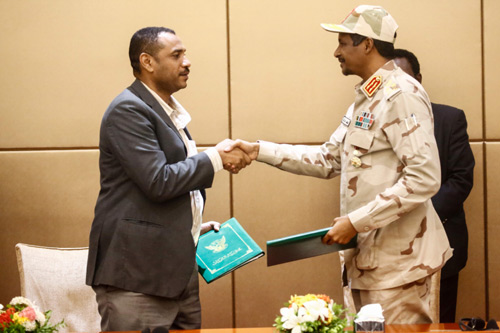 Sudan’s Transitional Military Council and protest leaders signed a constitutional declaration deal on Sunday which will pave the way for a promised transition to civilian rule, AFP reported.

The hard-won declaration came after prolonged negotiations between Sudan’s ruling military council and the Forces of the Declaration for Freedom and Change (FFC), and more than seven months of several deadly street rallies.

The agreement signed between Protest movement leader Ahmed Rabie and the deputy head of the ruling military council, General Mohamed Hamdan Daglo at the ceremony attended by African Union and Ethiopian mediators in Khartoum.

“We turned a tough page of Sudan’s history by signing this agreement,” Daglo said.

On Saturday, African Union mediator for Sudan Mohamed Al-Hassan Labett said military council and the opposition coalition have reached an agreement on the constitutional document to usher in a new period of transitional government.

Sudanese celebrated through the streets of Sudanese capital of Khartoum and other cities in the country.

On 17 July, military generals and protest leaders have already inked a power-sharing agreement which will allow establishment of joint civilian-military ruling council to oversee the formation of a transitional civilian government and parliament to govern for a three-year transition period.

A formal signing in front of foreign dignitaries is due to take place on 17 August, which will also mark the same date on which ousted president Omar Al-Bashir will face his first trial on corruption charges.

Also, Reuters reported on Sunday that military council and opposition coalition expected to put their final signatures on a constitutional declaration on 17 August.

Sources told Reuters that parties are expected to initial the declaration, which was agreed on Saturday, on Sunday.

The sovereign council, which is supposed to run the country during a three-year transitional period leading up to elections, will be announced on 18 August and new prime minister will be named on 20 August and a cabinet on 28 August.

Similarly, FCC announced on Sunday that the formation of the new Sudanese civil government of the transitional period will be completed in one month, during a press conference to present the latest development in Sudan.

During the conference, leader of the FFC Madani Abbas said a timetable will be set for the formation of the state structures in the transitional period.

He also said that the constitutional declaration will set a period of “maximum one month” to form an independent committee to investigate the events of dispersal of Al-Khartoum sit-in which took place two months ago.

Moreover, Ebtisam Al-Sanhoury, another member of FCC said “constitutional declaration” is set to establish a system for Sudanese parliament, and will grant the most executive powers to the prime minister, except for a few powers will coordinate with the sovereign council.

She further explained that the cabinet will consist of average twenty ministers, and the prime minister will be appointed after approval of the sovereignty council.

“FFC members will be represented by 67% in the new legislative council. The remaining seats will dedicated for the forces that contributed to the revolution and did not sign the declaration of freedom and change,” she noted.