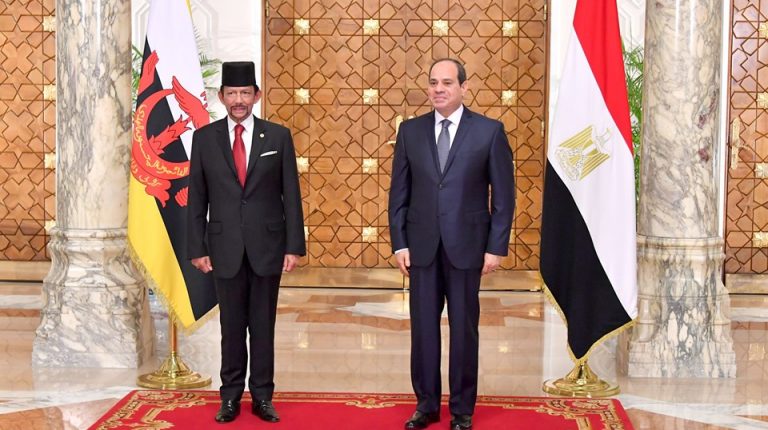 Egypt’s President Abdel Fattah Al-Sisi met on Monday with Hassanal Bolkiah, Sultan of Brunei at the Presidential Palace in Itahdyia as part of an official visit from Bolkiah to Egypt to boost bilateral relations across different fields.

According to a statement from the Presidency official spokesperson Bassam Radi, Al-Sisi held bilateral talks with the Sultan of Brunei, followed by a wide-ranging session of talks between the delegations of the two countries.

“President Al-Sisi welcomed the Sultan of Brunei in Egypt, stressing His Majesty’s visit represents a strong stimulus for bilateral relations between the two countries, especially in the light of the great understanding between Egypt and Brunei on various regional and international issues” the statement read.

The statement noted that Al-Sisi also expressed the hope to strengthen bilateral cooperation with Brunei in various fields, particularly on the religious, tourism, cultural and economic fronts.

For his part, Bolkiah accentuated the depth of relations between the two countries, praising Egyptian achievements in combating terrorism, economic reform and executing major national projects being implemented to achieve comprehensive development in the past period.

“Egypt’s pivotal and active role in the Arab and Muslim worlds is the role that Brunei is counting on for the stability and security of the Middle East and the Islamic world as a whole” Bolkiah said during his meeting with Al-Sisi.

Meanwhile, President Al-Sisi showcased Egypt’s efforts over the past years to combat and undermine extremist ideology and the role of religious institutions in Egypt to correct the religious discourse, stressing Egypt’s keenness to continue the role of Al-Azhar in Brunei as a beacon to spread the noble and moderate values ​​of the true Islam.

Moreover, Sultan Hassan Bolkiah stressed the importance of the Egyptian role in confronting the rhetoric of extremism and hatred, saying that Al-Azhar has a high status among the people of the Sultanate of Brunei for its broad cultural and religious influence.

The meeting also reviewed the latest developments in the Middle East and the Islamic world, both leaders stressed the importance of continuing intensive coordination and pushing forward joint efforts between the two countries in light of the regional crises, in addition to enhancing cooperation and consultation in various international forums.