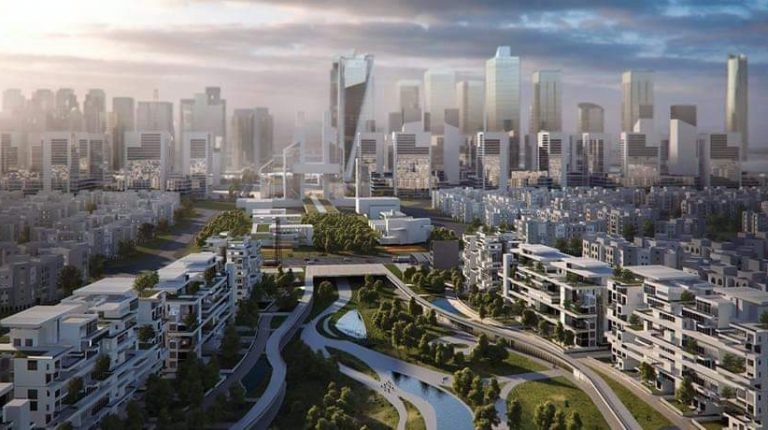 Ahmed Zaki Abdeen, chairperson of Administrative Capital for Urban Development (ACUD), revealed there are many offers from foreign and Egyptian companies to obtain large plots of land in the New Administrative Capital (NAC) project, east Cairo, although the ACUD has doubled the price of land compared to the first land offering in 2016/17.

Abdeen said the ACUD is studying entering in partnerships with developers to establish new projects in the New Capital, but the company will not apply this system in allocating lands of the first phase of the project.

Daily News Egypt interviewed Abdeen to know further details about the development of the NAC project, the transcript for which is below, lightly edited for clarity:

How many companies did pay deposit for their lands in NAC?

Ten real estate companies have paid only 2% of their land deposits, but we are still in negotiations with these companies to pay 20% of the land price, and we will reach an agreement soon.

Do you plan to enter in partnerships with developers in the first phase of the NAC project?

Our priority in the current period is to sell lands of the first phase of the NAC project, however, we welcome having partnerships in second and third phases. We plan to have partnerships for plots of land exceeding 100-1500 feddan.

What are most important partnership offers the company received?

We have a recent offer submitted by an Italian investor to launch the largest Disney Land project in the New Capital on 1,200 feddan. We are currently negotiating with the Italian company about the price of land and the pricing committee is currently determining the value of the project’s land to be presented to the Italian investor which will be part of the second phase of the NAC project.

Additionally, the ACUD is close to an agreement with an Emirati investor to get 1,200 feddan to set up a global residential project in the New Capital with investments estimated at EGP 18bn. The company had asked to obtain a plot of land within the rest area that the AUCD has not offered in the first phase of the NAC project.

Do you plan to offer new lands in the current year?

No, we do not need to offer new lands in the current year. However, we are studying partnership projects offered by Arab and Egyptian developers with large plots of land. Approximately 17,000 feddan have been sold in the first phase of the project.

How much did providing necessary utilities cost?

What is the value of construction contracts in New Capital?

The value of construction contracts signed by the ACUD in cooperation with the New Urban Communities Authority reached about EGP 40bn, which has been targeted since launching the project. About 70 companies are implementing infrastructure, buildings, road networks, drainage, water, and other projects.

How many embassies did request to move to the New Capital?

The ACUD has received 22 requests from foreign embassies in Egypt to acquire lands in NAC’s Diplomatic District, notably Saudi Arabia and China, who each appealed for a 20-feddan plot.

The Diplomatic District is the responsibility of the Ministry of Foreign Affairs, and thus, it is responsible for accepting such applications and coordinating with ACUD in the process of land allocation.

ACUD has not yet received any payments from the concerned bodies in this district and prices stand at $400 per sqm.

Three African countries covet to transfer Egypt’s experience in the implementation of NAC and are eager to establish a similar administrative capital in their homelands, notably Tanzania and South Africa.

What is the situation of infrastructure development in NAC?

The ACUD has completed 60% of the first phase of the New Capital infrastructure which spans over 40,000 feddan. A total of 17,000 feddan were sold for EGP 272bn to be paid in installments over four years.

In case of obtaining the ministerial approval and the companies did not begin construction works, what does the ACUD do in this case?

There are many companies that have obtained ministerial approvals for developing their projects, and those who obtained building license and did not begin construction works were warned by the ACUD

After the ministerial approvals are obtained, the company has to complete 25% of its project within a year.

Additionally, in the event that companies procrastinate in submitting their papers for obtaining ministerial approvals, the ACUD sends them memos to apply for them, and if there was no response from the companies, then ACUD has the right to withdraw the allocated land.

What are the updates of the ACUD’s negotiation with Emaar Misr?

The company’s negotiations with Mohamed Alabbar [Chairperson of Emaar Misr] stopped completely because the ACUD was not satisfied with the offer. The land that Alabbar was negotiating was sold to an Egyptian investor.

Do you plan to borrow from banks?

The ACUD will not borrow from banks. The financial position of the company is very strong. The company has accounts in more than 20 domestic and foreign banks, where the company’s profit reaches EGP 2bn year-over-year.

Do you plan to offer the company on Egyptian Exchange (EGX)?

The company has no intention at all to offer its shares on the EGX. Accordingly, the company’s financial position is very strong, and we do not need to have shareholders. If the company needs more funds, it would offer new lands to get sufficient liquidity for infrastructure development.

What are the updates regarding Talaat Moustafa Group’s request to obtain a 5,000-feddan in the NAC?

The ACUD has refused the request due to disagreement on the price of land.

What is the percentage increase of land prices in the NAC project?

The pricing committee at ACUD meets every six months to specify the increase in prices. I expect an increase of 10-15% in prices in the coming six months as well as, further increases after opening the governmental district and presidential palace, and operation of monorail and electric train. The first offering price for residential areas was EGP 2,100 per sqm, however, it currently reached EGP 4,000 per sqm. Meanwhile, it reached EGP 15,000 and EGP 40,000 per commercial sqm instead of EGP 5,000. Furthermore, the ACUD has sold lands for EGP 2,100 per sqm for the Ministry of Communications at the Knowledge City.

What are updates of the medical city in the NAC?

The company has received several offers to invest in the medical city, namely a request from a Saudi investor to have an integrated medical project on 120 feddan and another from an Egyptian investor on an area of 150 feedan.

How many contractors are working in the NAC project?

There are more than 40 contracting companies working in the NAC with total construction contracts worth approximately EGP 50bn.