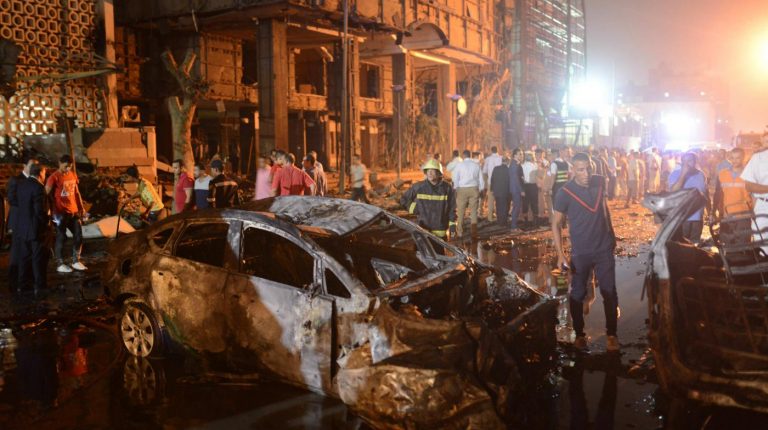 Secretary-General of the United Nations (UN) António Guterres strongly denounced the ‘deadly terrorist’ attack which took place in front of the National Cancer Institute in Cairo early on Monday morning and left at least 20 people killed.

According to a statement, on Tuesday, from Stéphane Dujarric the spokesperson for the UN Secretary-General, Guterres offered his deep condolences to the Egyptian people and expressed his wishes for a speedy recovery to the injured.

The huge explosion that hit the building of the National Cancer Institute on Monday morning was believed to be due to a collision between cars in the street ahead of the building. However, later the ministry revealed that the initial technical examination showed that the car which caused the incident was carrying explosives that detonated as a result of the collision.

“The car involved in the incident had been stolen a few months ago,” the statement added. The Interior Ministry first said in a statement released directly in the wake of the incident that it was due to a collision between vehicles.

The statement accused the Muslim Brotherhood group affiliated Hasm Movement of rigging up the car. “The car was heading to somewhere to conduct a terrorist attack,” the statement adds, without defining the destination.

Meanwhile, the ‘Hasm’ movement denied all that has been mentioned through the Interior Ministry’s statement of being responsible on the explosion, noting that it does not target civilians in its militant attacks, stressing that they only target prominent figures of Egypt’s current political regime.

The story of ‘Hasm’ movement dates back to 2014, however its activity appeared apparently in 2016.

Following the rise of the “Sinai Province” militant group in 2013 and its swearing allegiance to the Islamic State (IS) the following year, militant operations against army and police forces were somewhat restricted to the regions of the Sinai Peninsula. However, in 2016 two other militant groups adopting different notions than those of IS started to target police and army figures in Cairo.

The first of which is the “Lewaa Al-Thawra”, that published in September 2016 a video of footage from an attack it executed against a security checkpoint in the Menoufiya governorate.

Afterwards, the group executed an unprecedented assassination of the army’s 9th armoured division, brigadier general Adel Ragaei, who was subjected to heavy shooting right outside his residence in Cairo on October 2016.

The second group “Hasm” appeared also in 2016. At that time the group said it was behind the failed assassination attempt of former grand mufti Ali Gomaa.

In the same year, the group claimed responsibility for an attempt to assassinate assistant General Prosecutor Zakareya Abdel Aziz in New Cairo. The attack, executed by a car bomb, left one civilian injured; Abdel Aziz survived the attempt.

Moreover, the group claimed responsibility in December 2016 for a bombing in Giza, which claimed the lives of six police personnel and left three others injured.

Though both groups have not declared a clear affiliation, they are believed to be a militant arm of the outlawed MB group, due to their usual justification to their operations.

Such reasons include; retaliation for the assassination of Mohamed Kamal, a senior leader in the MB. Kamal, 61, was killed in his residence at the beginning of October 2016 during a raid conducted by Interior Ministry forces. Kamal was accompanied by a teacher named Yasser Shehata, who was also killed in the incident.

The National Cancer Institute’s explosion left at least 20 people including 4 unidentified people killed and 47 others were injured, according to a statement from the Ministry of Health.

In reaction, President Abdel Fattah Al-Sisi offered his condolences to the relatives of victims of the incident, stressing that the state is determined to defeat terrorism.

The Attorney General Nabil Sadik announced opening an investigation into the incident.

Furthermore, spokesperson of the Ministry of Health Khaled Mogahed said that the injured were transferred to Nasser Institute, Al-Muneera hospital, and Qasr Al Ainy hospital.

According to the ministry, there are four serious cases at the intensive care units in Nasser Institute Hospital, out of the 47 injured, and the rest of the injuries ranged from simple to moderate fractures, in addition to cases of burns of varying degrees.

The Ministry of Health stressed that all cases of the National Cancer Institute are safe and no deaths or injuries were recorded among the patients.