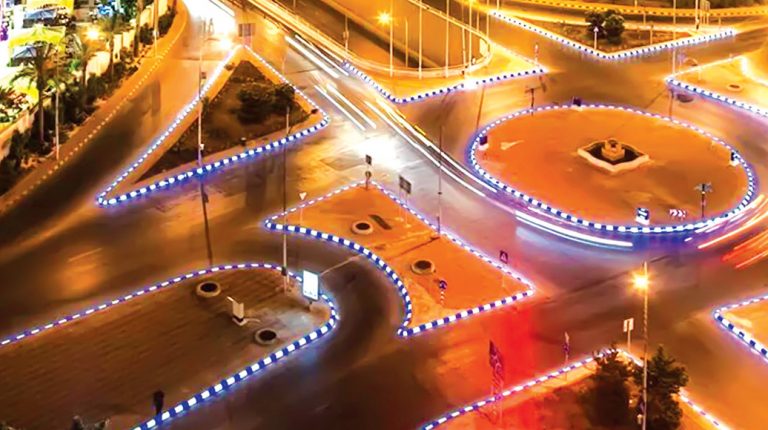 Poly Egypt has signed a contract to supply EGP 8m worth LED curbstone roadside pavements for the New Administrative Capital.

Ibrahim Soliman, the company’s sales manager, said that Poly Egypt’s LED roadside pavements will be installed in main roads, most entrances of compounds, Al Masa Hotel, the government neighborhood, and the games complex in the New Administrative Capital. There are also negotiations to supply LED pavements for the Green River region.

He pointed out that the company contracted with the Egyptian Media Production City to install EGP 1.2m worth LED roadside pavements in the main entrances. The company is also installing LED pavements at Emir Sabah Al-Ahmad street in Sharm El-Sheikh, as well as other areas in New Alamein city.

“We have signed a contract to provide LED pavements in Marsa Matrouh Corniche – a waterfront promenade – and develop the conference hall of Egypt International Exhibition Center at El-Moshir Tantawy Axis in New Cairo,” Soliman added.

He said that Poly Egypt has EGP 18m worth contracts to supply LED pavements within seven months. All the company’s products are manufactured in Egypt, but the LED lights are imported.

He pointed out that the company aims to increase its exports of LED pavements next year, mainly Saudi Arabia, Kuwait, and the UAE.

The LED curbstone roadside pavements include plastic pieces with LED lamps inside in different colors. They can be carried, installed, and maintained and no heavy equipment is needed.

Soliman noted that this kind of pavements has a long lifespan, as they are not affected by car hits or natural factors, not to mention that they are 50% lower in cost than cement pavements in terms of transport, installation, and maintenance costs.

He said that Poly Egypt has other products such as interior and exterior decorations for houses, gardens, and malls. The cost of these products varies according to the shape and lighting, adding LED pavements cost EGP 450 per metre.