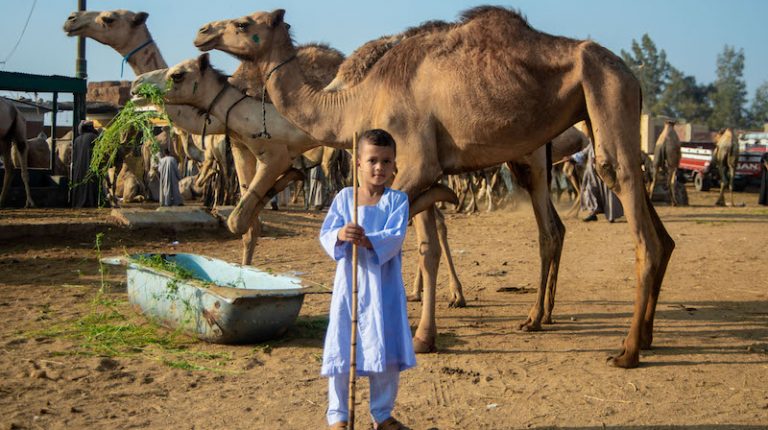 With only a few days left until Eid Al-Adha comes, celebrated by Muslims throughout the world.

“Since I was born, I used to see my father sacrifice an animal every month and after any successful commercial deal, as a merchant my father used to sacrifice calves not only in Eid Al-Adha, and I inherited this habit from him,” Faten Salah El-Din, the chairman a car agency told Daily News Egypt.

During the Eid, families that can afford to sacrifice a ritually acceptable animal (sheep, goat, camel, or cow) do so and then divide the flesh equally among themselves, the poor, and friends and neighbours. 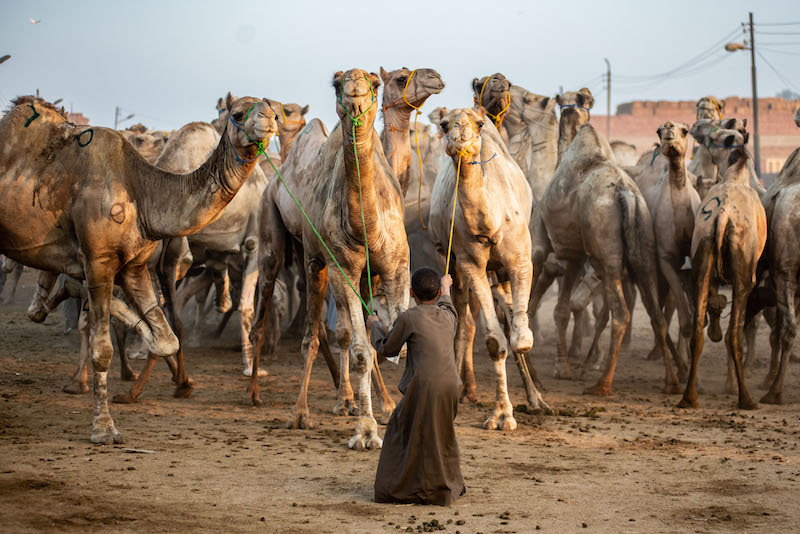 In that time of the year, Egypt’s streets get filled with sheep, cows and even camels, as the sheep trade flourishes with thousands of Egyptians heavily purchase them. Daily News Egypt’s crew roamed the streets of Egypt talking with people and traders, who spend their days waiting for the season.

However, with the beginning of the economic reform programme in 2016, which affected the prices of different commodities, including meat, Egyptians habits started to change.

Unlike the increase in every commodity price, the prices of sheep are reduced this year, due to lack of demand.

Faten Salah El-Din said that she has been buying calves a long time ago but this year the price has fallen unexpectedly to its lowest rate decreasing by about 30% compared to its price three years ago. The price for the calve three years ago equal s the price of a calve and half this year. She said that the Armed Forces meat outlets have offered cheaper calves which helped to decrease the prices in the market.

Mokhtar said a 35 -year- old engineer said” I work in a Gulf country I used to transfer the money for my family in Egypt to buy “Sakk Al-Odhya” – a sacrifice voucher allowing you to pay the money a charity organisation will do the sacrifice for you – but then I found some organisations in the Gulf countries that allow you to choose the poor you will donate for.”

“I can choose any poor country to donate for its Muslims people, but the price will differ according to the country you choose, for an example the Somali calves are cheaper than the Chinese ones. Last year I choose to donate for Palestinian poor people for $165,” he added.

“The calves’ price has dropped around EGP 2,000 since last year in Minya Governorate, encouraging more people to share calves, a maximum of seven people can share one calve, but as the price decreased this allows people to only share the calve with four or five others,” Hossam, who works as  journalist told DNE.

He added that he had bought sheep this year from Minya governorate, and its price had dropped EGP 1,000 compared to last year.

However the price of calves and sheep decreased reaching 30% lower than last year but the price hikes took it’s toll on “Sakk Al-Odhya,” as it reached EGP 1,940 instead of EGP 890 in 2016, according to Dar Al- Orman, which is considered as one of the organisations responsible for “Sak Al Odohaya.” Amal Mobada, Fundraising Sector Director, at Misr El Kheir Foundation, explained in an interview with Daily News Egypt that the organisation targets to distribute 2,000 “Sakk” more than the last year to reach 30,000 Sakk, declaring that the price of the Sakk this year is EGP 3,300 for the purchase of 27 kilos which represents a seventh of the sacrifice.

“Change will not come if we wait for some other person or some other time. We are the ones, we have been waiting for, we are the change that we are seeking,” the former US President Barack Obama. The Egyptian trying their best to cope with the hard circumstances, they struggle to change their habits and consuming behaviours.

Wafaa Abd El-Razek a 55 -year- old housewife said “I used to go reserve a calve in one of charity organisation, for Eid Al-Adha holiday five years ago, this cost me around EGP 2,000, the organization distributed one third of the calve on the poor, then I should decide whether if I will take one or two thirds of the calve, but now it becomes more convenient to buy “Sakk Al-Odhya”, which means I only buy one third of the calve and donate it for the poor, what cost me EGP 1,950.”

Bassam Essa, a sheep trader said “The sheep will cost between EGP 2,700 and EGP 4,200 approximately but we are flexible about the price, customer can choose the sheep they want and give us a deposit, and we will mark that sheep with red colour spray, so the customer can come again to receive the sheep within a week.”

He explained that they sell only Libyan Barki sheep. Despite its expensive price, it is in high demand for its pure meat, adding that “however the sheep’ prices have dropped about EGP 500, recently people don’t prefer buying sheep, as after slaughtering it, the produced neat meat is considered to be less they hope for.”

On the other hand, Marwa Ahmed a 55 -year- old a civil servant said “we used to buy a sheep every year for Eid Al- Adha, but now we stopped this habit, as it becomes more affordable and convenient to only buy meat. We buy 10 kilos of meat as my family consist of 3 people so it is more than enough for this occasion.” In Cairo’s Nasr City district, Mohamed Kassab, the owner of a local butcher shop, complains that the sales traffic is very weak, despite the price drops in meat prices.

“However the price of meat differ according to its kind whether it calves or lamb, but people equate their consumption to every kind in Eid Al-Adha, if they buy two kilos of calves’ meat in return they would buy two kilos of lamb,” said Kassab.

“In the past, they have customers that would buy 25 sheep but now it is difficult to find a customer who would buy only one sheep. People now try to save every penny they have so they prefer to share in calve rather than buying a sheep as its much cheaper this way.”

According to Kassab the price of the meat is EGP 5 cheaper than last year, but the demands for meat has decreased in the last few years, the customers also have decreased their consumption.