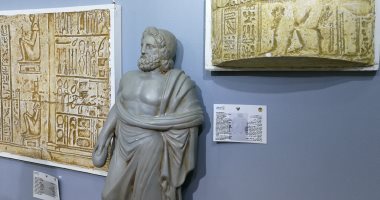 About a year before the gala opening of the Grand Egyptian Museum, the Ministry of Antiquities reveals another museum of relics. The ministry announced the restoration of Tanta Museum has been completed and it will be reopened by the end of August after 18 years of closure.

The museum will showcase a total of 8,579 artifacts from various ancient eras; Roman, Greek, and Pharaonic, most notably a statue of Imhotep – the architect of the Step Pyramid of Djoser in Saqqara – an icon of Virgin Mary, and a statue of the god Osiris.

The museum will also display banners and graphics telling the story of Al-Sayed Al-Badawi, a relative of the Prophet Mohammed, local media said.

The museum was built in 1913 as a part of the municipality building in order to be the city’s main museum.

The renovation process included restoring the once timeworn building and the structure, and building two extra showrooms for antiquities.

Waad Abu El-Ela, head of the projects sector at the ministry, explained to Al-Ahram Online that “99% of the architectural work of the museum had been achieved and included the consolidation of the structure, foundations, and concrete columns. The inner and outer walls of the building had been polished and new security and lighting systems installed.”