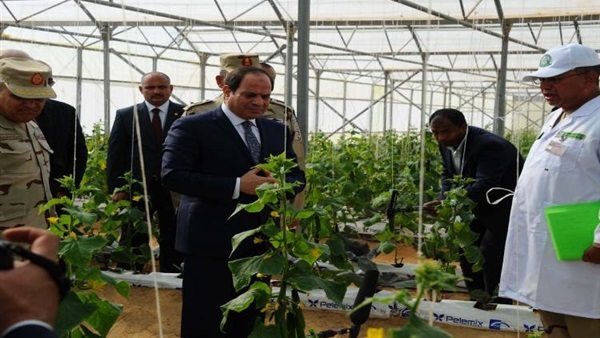 President Abdel Fattah Al-Sisi inaugurated 1,300 greenhouses at Mohamed Naguib military base on Saturday morning, as part of the national agricultural project, marking the largest greenhouse complex in the Middle East.

The second phase of the greenhouses project was established on an area of 10,000 feddan.

The first phase of the project was opened in February 2018 to grow agricultural products using less water for irrigation than traditional farming.

Meanwhile, the president also opened a new factory for packaging of agricultural products in Marsa Matrouh.

The project is executed by the National Company for Protected Agriculture affiliated to the National Service Projects Organization.

Al-Sisi said that the new phase’s productivity is estimated at around 184,000 tonnes of vegetables annually.

The greenhouse projects will contribute to achieving food security and bridging the gap between production and consumption in the country, maximising the use of available land for agricultural activities while rationalising water usage, establishing integrated agricultural communities, providing high-quality products free of pollutants, and creating new job opportunities.

Last week, President Al-Sisi made an inspection tour to monitor the progress of the greenhouse project.

The president made some remarks on market control during the inauguration ceremony. He said that state cannot take side of consumers against traders and the opposite. He also highlighted when the state previously interfered to control prices of meat, the profits of small farmers were impacted, therefore the state’s interference should be balanced.

“We want all of us to move together to achieve balance, where consumers get products at reasonable prices while preserving farmers’ rights,” Al-Sisi said.