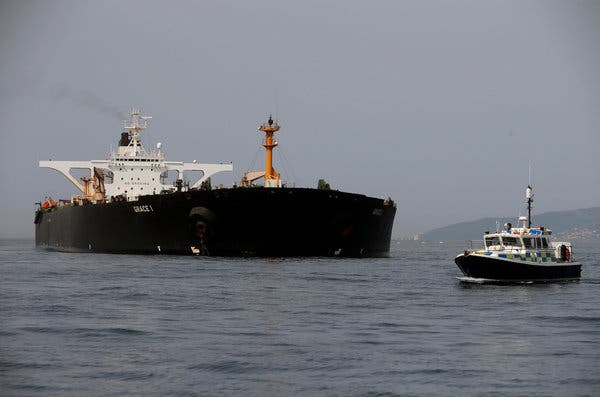 The Supreme Court in Gibraltar ordered on Thursday the seized Iranian tanker “Grace 1” to be released despite the US request to keep capturing the tanker.

Gibraltar authorities announced that Iran vowed that the tanker will not unload in Syria.

Meanwhile, a US court ordered capturing the Iranian tanker upon a request from the US government.

The Iranian tanker “Grace 1” was captured by the British Royal Marines off Gibraltar early in July, because of transporting 2.1 million barrels of Iranian oil to the Syrian regime in contravention of EU sanctions.

Capturing the Iranian vessel caused a political conflict in the Gulf region between Iran in a side, and the US and the UK in the other side, when Iran which controls navigation in the Strait of Hormuz responded by capturing British and European tankers.

Last week, London announced intention to join a proposed US military mission to safeguard maritime navigation in the Gulf.

On Wednesday, the Iranian President Hassan Rouhani said that Iran and the other Gulf countries are able to safeguard the Gulf. Rouhani stressed his previous statements that there is no need for foreign troops in the Gulf.

Rouhani’s statements came just one day after the UK has sent the warship HMS Kent to the Gulf on Monday to join the US-led mission in the region.