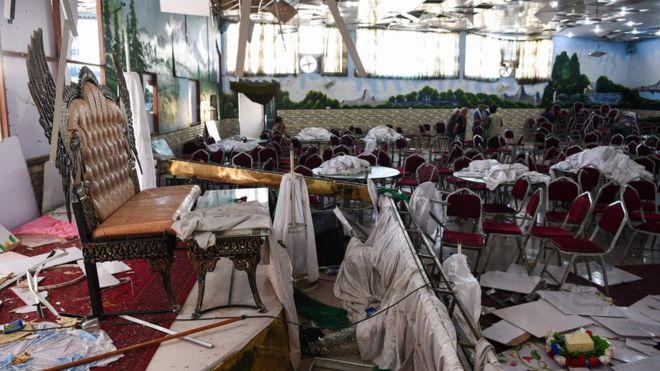 The Islamic State (IS) claimed responsibility on Sunday for a suicide bombing at an Afghan wedding killing 63 people, and injuring more than 180.

The attack took place in a minority Shi’ite neighborhood. IS said that in a statement that the bomber sneaked in the reception and carried out the explosion in the crowd of “infidels”.

Both the bride and groom survived form the explosion. Although the bombing take place in the men’s area, as in Afghan weddings men are usually segregated from the women and children, the explosion killed and injured more than 200 with many women and children among the casualties, said interior ministry spokesman Nasrat Rahimi, according to Reuters.

The Saturday night explosion came days after the start of the negotiations, in Qatar’s capital, Doha, between Taliban and  United States as both are trying to reach an agreement for withdrawing US forces in exchange for a Taliban commitment on security and peace talks with Afghanistan’s government.

The President of Afghanistan Ashraf Ghani, strongly condemned the attack on the wedding describing it as “ inhumane barbaric attack.”

Moreover IS has claimed some of the most bloody attacks in Afghan cities over the past years, with some aimed at the Shi’ite minority.

Hamas takes on the radicals

Portrait of a brave woman