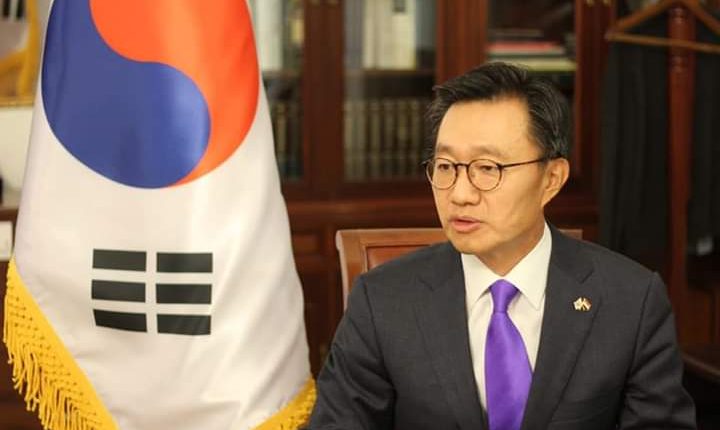 “The future FTA with Egypt will hopefully solve the current issue that faces Korean automotive companies after activating the zero tariffs policy on the European cars which makes the competition unfair,” the ambassador told Daily News Egypt.

This came after DNE attendance of the preparation for the online live stream of the final episode of ‘Assalam Alikum from Cairo’ show on Sunday that the embassy supports. The show broadcasts its content in Korean by Egyptian young men and ladies for the Korean people to closely know more about the Egyptian lifestyle.

Egypt and Korea enjoy very strong relations, the ambassador asserted, noting, “the South Korean President Moon Jae-in is keen on visiting Egypt. It would be a good achievement for both countries if the Korean president and his Egyptian counterpart Abdel Fattah Al-Sisi agreed to sign the future FTA over the expected visit by president Moon,” the ambassador mentioned.

President Al-Sisi paid South Korea a historical visit in March 2016, over which both countries agreed on a $3bn financial package for Egypt, the ambassador pointed out.

Major Korean companies are investing in the Egyptian market and supporting the economy with their exports, the ambassador said, adding that there are also few small Korean textile businesses textile hope to increase their investments in Egypt soon.

“We recognise Egypt as a huge country with huge passionate population,” the ambassador asserted, noting that South Korean government pays great attention to training and building capacities of Egyptian youth.

The Korean Technological College which will be inaugurated later this year in Beni Suef will play a vital role in providing the Egyptian market with skilled youth, the ambassador noted, adding that his country will cooperate with Assiut University for training programmes and building capacities.

The economic cooperation with Egypt is very much diversified, including transportation, infrastructure, in addition to other areas, the ambassador mentioned, adding that Hyundai Rotem is already cooperating with Egypt’s Ministry of Transportation for new airconditioned trains to the underground which makes the lives of Egyptian people better.

South Korean is also cooperating with Egypt for a $115m project for development of railways, the ambassador mentioned, asserting that transportation is very important area of cooperation between Egypt.

Korea also shares its economic experience with Egypt through Knowledge Sharing Programme that aims at development of each sector, the ambassador said, adding that his country cooperates with Taxation Authority on development of Egypt’s taxation system.