The Central Bank of Egypt (CBE) will resume its monetary easing cycle in the fourth quarter (Q4) of 2019,  Fitch Solutions expected over its “Africa Monitor: North Africa” report released on Thursday evening, adding, “we expect the CBE to enact 200 basis points worth of cuts in 2020 as fiscal consolidation eases and the International Monetary Fund (IMF)-backed reform programme comes to an end.”

Overnight lending and deposit rates will reach 13.75% and 12.75%, respectively, by the end of 2020, the report said, noting, “despite Egypt’s commitment to completing its IMF-stipulated reform programme with the fourth round of subsidy cuts in mid-2019, we believe a subdued outlook for commodity prices will cap inflationary pressures over the coming quarter.”

A couple of economic experts agreed with Fitch Solutions’ expectations regarding the importance interest rates cuts in 2019, noting that the remaining period of the year should witness new cuts to encourage investment flows and decrease the costs of finance.

Fitch Solutions’ commodities team expects the price of wheat – a proxy for food prices – to fall below the 2018 average this year while FS’ oil & gas team forecasts a mere 1.8% increase in average global Brent crude prices in 2019. 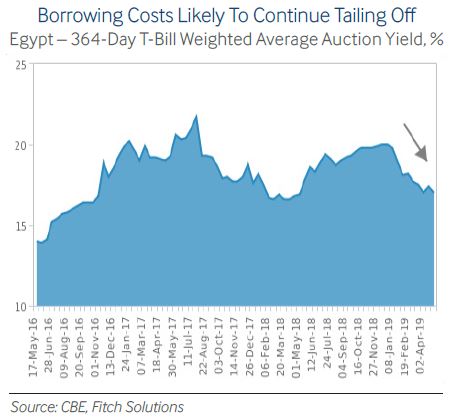 The US Federal Reserve’s decision to take on a more neutral stance will provide the CBE with additional room to resume monetary easing without prompting large capital outflows, Fitch Solutions added.

The Egyptian pound has appreciated by 4.1% against the USD in the year to date despite a rate cut by the CBE in February, said the report, adding, “we believe this will prompt the CBE to cut the overnight deposit and lending rates in 4Q2019 to 14.75% and 15.75%, respectively.”

The expected interest rate cuts will positively reflect on easing the government debts burden, Sherine El-Shawarbi, economic expert and former advisor to the World Bank Group in Egypt, told Daily News Egypt, adding that the inflation indicator is in down trend which encourage the authorities to cut the interest rates.

“We expect the disinflationary trend to carry over to 2020 as fiscal consolidation eases and the IMF loan programme comes to an end. Base effects will likely wear off, particularly towards the second half (H2) 2020, keeping headline inflation firmly within the CBE’s target of 9.0% (±3.0%) by 4Q2020,” Fitch Solutions mentioned.

monetary tightening throughout the IMF programme, the report added, noting that this will bode well for job creation and, more broadly, the country’s growth trajectory.

The pace of monetary easing will be gradual in a bid to maintain relatively attractive real interest rates vis-à-vis safe haven assets and to prevent large capital outflows, the report explained, noting, “this is especially pertinent given that the repatriation mechanism – an exchange rate guarantee for portfolio investors that draws on a dedicated foreign reserves fund at the CBE – has been scrapped for inflows dated after December 2018. As such, we forecast 200 basis points worth of cuts to the policy rate in 2020.”

The interest rate cuts will positively reflect on narrowing the budget deficit in line with the expected increase in tax revenues, El-Shawarbi noted.

Egypt’s fiscal deficit will continue to narrow over the coming fiscal year, according to the report, expecting the budget shortfall for the current fiscal year to come in at 8.5% of GDP.

Strong revenue growth will also help slim deficits down. The Egyptian economy continues to grow apace and we forecast real GDP growth to come in at 5.4% in FY 2019/20, slightly above the 5.3% recorded in the last fiscal year, according to the report.

Together with measures to increase tax collection, such as requiring businesses to report some of their taxes online, tax revenues should continue to grow at a healthy clip in FY 2019/20, the report said.

This makes debt servicing costs exceedingly high, with interest payments consuming over half of Egypt’s tax revenues.  That said, short-term local currency borrowing costs have dropped substantially since the start of the year thanks the US Federal Reserve’s more neutral language since December and rate cuts by the CBE in February. 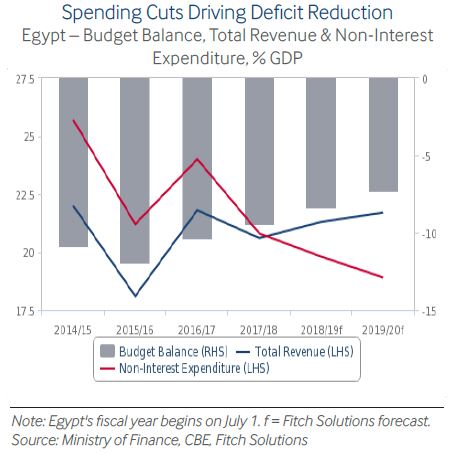 The Egyptian pound is likely to slowly depreciate from 2020 onwards as real rates once again become less attractive vis-à-vis the US. We believe the CBE will resume its monetary easing cycle in 4Q2019 and maintain it over the next several years as inflation decelerates and macroeconomic stability improves, reducing the attractiveness of the EGP, according to the report.

Fitch Solutions expected the pound’s long-term depreciation to be gradual, forecasting it to finish at

Economic expert Youmn El-Hamakki told Daily News Egypt that the position of the EGP will remain strong over the next period due to improving the foreign currency resources such as exports, Egyptian expats remittances, Suez Canal fees of transportation as well as FDIs.

Trade tensions continue to pose a danger to global growth, with the US Trump administration once again hardening its rhetoric against both China and the EU after months of relative calm, the report said.

Increased punitive measures could spark another bout of risk-off sentiment, which would hit emerging markets especially hard. We expect this would trigger some degree of capital flight from Egypt (especially of volatile short-term debt instruments) and exert downside pressure on the pound, likely pushing the CBE to lend support to the unit in a bid to stave off imported price pressures, the report mentioned.

The Egyptian market remains attractive comparing to other similar markets if the CBE cuts interest rates and the US Federal Reserve took on a more neutral stance, El-Hamakki asserted.

Fitch Solutions report revised down Algeria’s 2020 growth figure, to 2.0% from 2.3% which reflects its belief that the risks of widespread social unrest will persist over the medium term, continuing to deter investment.

“Indeed, although our core view remains for moderate concessions by the ruling elite to eventually help quell the current wave of unrest, we still believe social discontent with the limited democratic representation in the country will continue to simmer, meaning protests could easily remerge further down the line,” the report mentioned.

The ongoing instability will likely see planned reforms to improve Algeria’s foreign investment regulations delayed, further weighing on investor appetite, said the report, noting that these factors add to an already challenging economic outlook for the country, with growth set to slide even further behind global emerging market averages over the next few years.

Additionally, Tunisia’s real GDP growth will stay weak compared to the region in the near term, said the report, noting, “we currently forecast growth of 2.4% in 2019 and 2.3% in 2020, from 2.5% in 2018. This represents one of the weakest rates in North Africa, just above Algeria.”

In different note, Fitch Solutions believes the dispute over the status of the Western Sahara region will remain unresolved for the foreseeable future, the report said, noting that UN-mediated talks in December 2018 and March 2019  have failed to resolve the decades-long dispute over the status of Western Sahara, with the Moroccan government firmly rejecting Algeria-backed Polisario’s demand to hold a referendum on independence from the Kingdom, offering autonomy instead which both Algeria and Polisario continue to oppose.

The dispute will continue to obstruct Morocco’s relations with Algeria and will likely impede the Kingdom’s ambitions in the broader Sub-Saharan Africa region, the report mentioned.