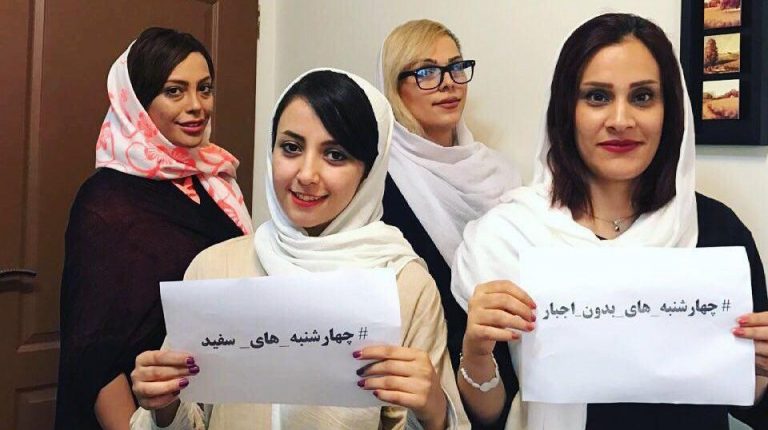 In our Arab societies there is no official punishment for the removal of the veil (hijab), but, instead individuals who do so suffer from psychological punishment from members some members of society.

Historically, Arab women could face criticism, judgment as well as abuses when they take off their veil, but were never subjected to legal punishment. 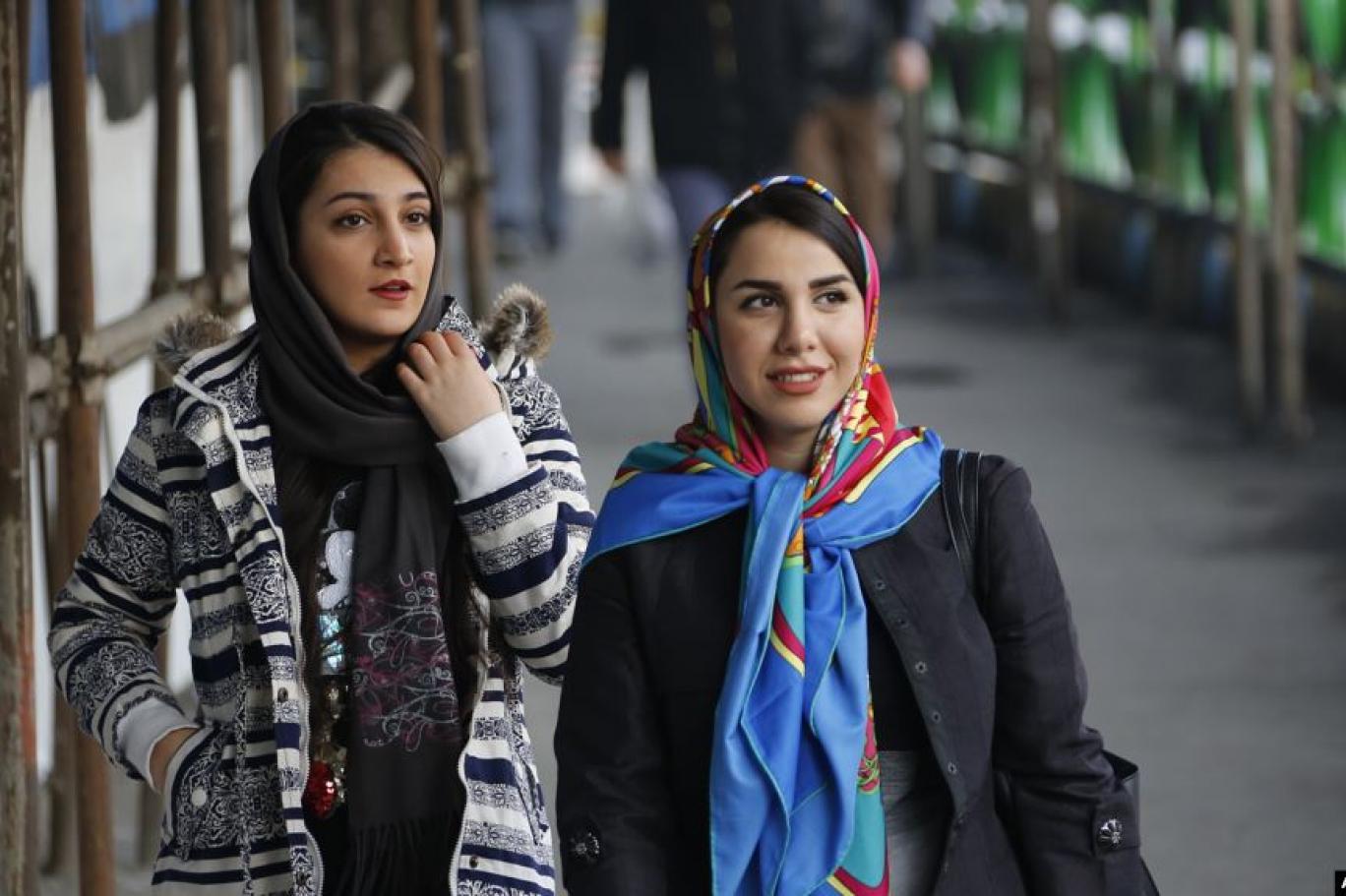 The activists are facing charges of gathering and colluding to act against national security and spread “propaganda against the regime” as well as, promoting and prepare grounds for corruption and prostitution.

The activists were arrested after an online video widely circulated on social media, showing them walking without a veil inside Tehran Metro and distributing flowers to passengers.

The punishment for not wearing the veil ranges from a fine to imprisonment and 74 lashes according to Article 638 of the Islamic Penal Code in Iran. The dress code law which came into force in Iran after the Islamic revolution in 1979, imposes on women out veiled and wearing a long and  wide dress.

The three females were detained in April, and reportedly faced enforced disappearance for 9 to 14 days. Iranian media outlets also reported that activists were initially unable to see a lawyer during the first phase of the investigation and “their legal representatives did not have the right to be represented during their trial.”

In the early 2000s, Iranian activist Messih Ali Nejad, opposed the compulsory hijab decision. She has has launched a movement called “White Wednesday”, a popular online platform in which activists and females living inside Iran share visuals of themselves walking in public without wearing a headscarf, expressing opposition to wearing a mandatory headscarf, and discussing their hopes for women’s rights.

There are dozens of females in Iran who also reject the veil, imposed by the Iranian authorities after the Islamic revolution.

Iranian activist Messih Ali Nejad, who is based in US, have previously explained that she is not against the veil but against the obligating females to wear it, noting that there is a big difference between the two ideas.

She said that several females in the Arab World are veiled due to succumbed to the pressure of Islamic groups, and to slogans which threatens women with a severe punishment “when judgment day comes.”

She added that these Arab women “did not wear hijab for the sake of God but to avoid negative gaze in societies who judge women for their clothes and not their morals and behavior.”

Moreover, “those who take decision to remove Hijab due face curses and insults, even from members of friends and family,” Nejad added.

Nejad succeeded in attracting the attention of people inside and outside Iran. In response to these movements, Iranian authorities decided to tighten the punishment. Iran has threatened women who take pictures of themselves or others while not wearing the hijab and sent them to Nejad, with 10 years imprisonment.

Following the arrest of the activists, the UN’s special rapporteurs on human rights in Iran have called on the Iranian government to release the three women who arbitrarily detained.

“We are concerned that the long arrests and sentences imposed on these women are directly linked to the peaceful exercise of their rights to freedom of expression and assembly in their pursuit of gender equality in Iran,” the experts added.

The rapporteurs said that the use of repressive legislation to criminalize the exercise of freedom of expression and peaceful assembly is contrary to Iran’s obligations under international human rights law, arguing that since January 2018 there have been at least 32 people arrested and 10 people imprisoned, as they protested to wear the mandatory headscarf.

In a tweet on August 14, the State Department spokesperson Morgan Ortagus wrote, “We condemn the Iranian regime for sentencing Yasaman Aryani, Monireh Arabshahi, and Mojgan Keshavarz to 55 years in prison for protesting compulsory hijab laws while simply handing out roses.”

The Iranian Center for Strategic Studies headed by the President Hassan Rouhani, revealed in a recent report that 49.8 percent of men and women in Iran regard the veil as a personal matter that the authorities should not interfere.

Iranians are trying to resist the imposition of the veil by putting a blanket on the headscarf, which Iranian pro-government media have called  “bad veil,” while others are holding demonstrations against forced headscarves, often with arrests.

Despite the harsher punishment, Iranian women still send their pictures and videos to Nejad for publication around the world.

Activists see that criticisms against Iran should not be limited not limited to “fighting terrorism and securing navigation in the Gulf”, but must include combating “the repugnant social model that the Iranian regime offers to a Muslim citizen inside and outside Iran.”

In a different incident, as part of crackdown on women freedom in Iran, on Friday six females activists were summoned for questioning by security in Tehran, and detained overnight for attending a football match, while Iranian females are not allowed to attend matches.

Among the measures to impose compulsory but otherwise arbitrary hijab rules in recent weeks, there has been an increase in the number of vice squad members detaining and punishing women for not following the law.

These measures, as reported by acticitst also include threatening women who doesnt wear the hijab tasking car drivers to report female passengers who do not observe the dress code. The Tehran subway operator has promised stricter hijab control on its trains in the coming week. 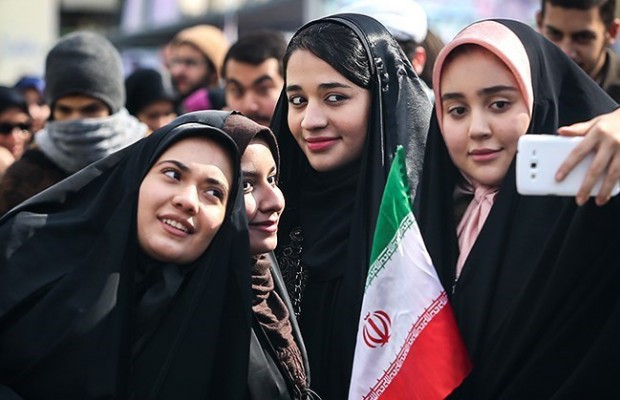 Social media users have warned that measures like this will further cause fragments among the Iranian society which is already dangerously divided as a result of a political system that gives all the powers and wealth in the country to clerics and military.

Those who are called in to a designated vice-squad station get jail sentences or have to pay a fine in cash, although there are also reports about individuals receiving lashes for some “offenses.”

Only in Gilan province, some 66,000 women have been called in to police stations via text messages on their cell phones, the iranian labour News Agency(ILN) reported. In Tehran, 300,000 text messages were sent to women and many cars were detained, the agency added.

Critics often cite financial corruption, discriminatory practices and rising crime figures as a result of mismanagement and chaotic clerical rule in Iran. Critics however say that hijab is the only thing that gives the Iranian government its Islamic appearance.