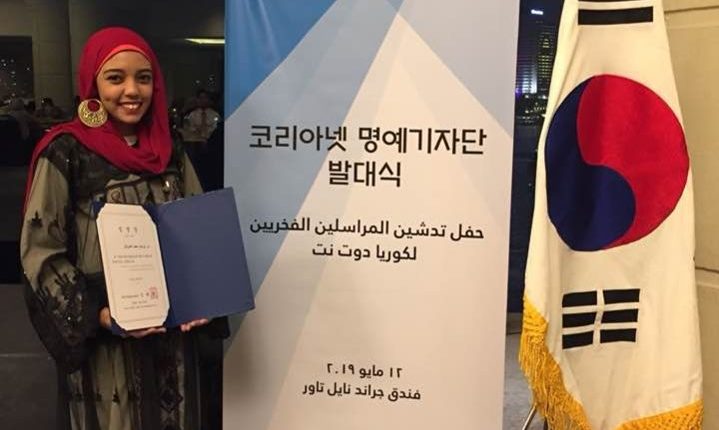 The day Nour El-Demerdash stepped inside the Faculty of Tourism and Hospitality, she opened her eyes about the glory of the ancient Egyptian civilisation, sensing many people’s ignorance across the world about it. She made up her mind into raising awareness about this shining, captivating world to as much people as possible, especially those who have not heard of it before. She could not find anything better, but her passion with Korean language to open the knowledge window to those who have not been aware of this world before.

Nour in her mid-twenties was the only Egyptian, and one of only three people from Africa, who won the Korean language speaking contest, which qualified her to visit Korea for ten days in which she kept telling the people about where she comes from. 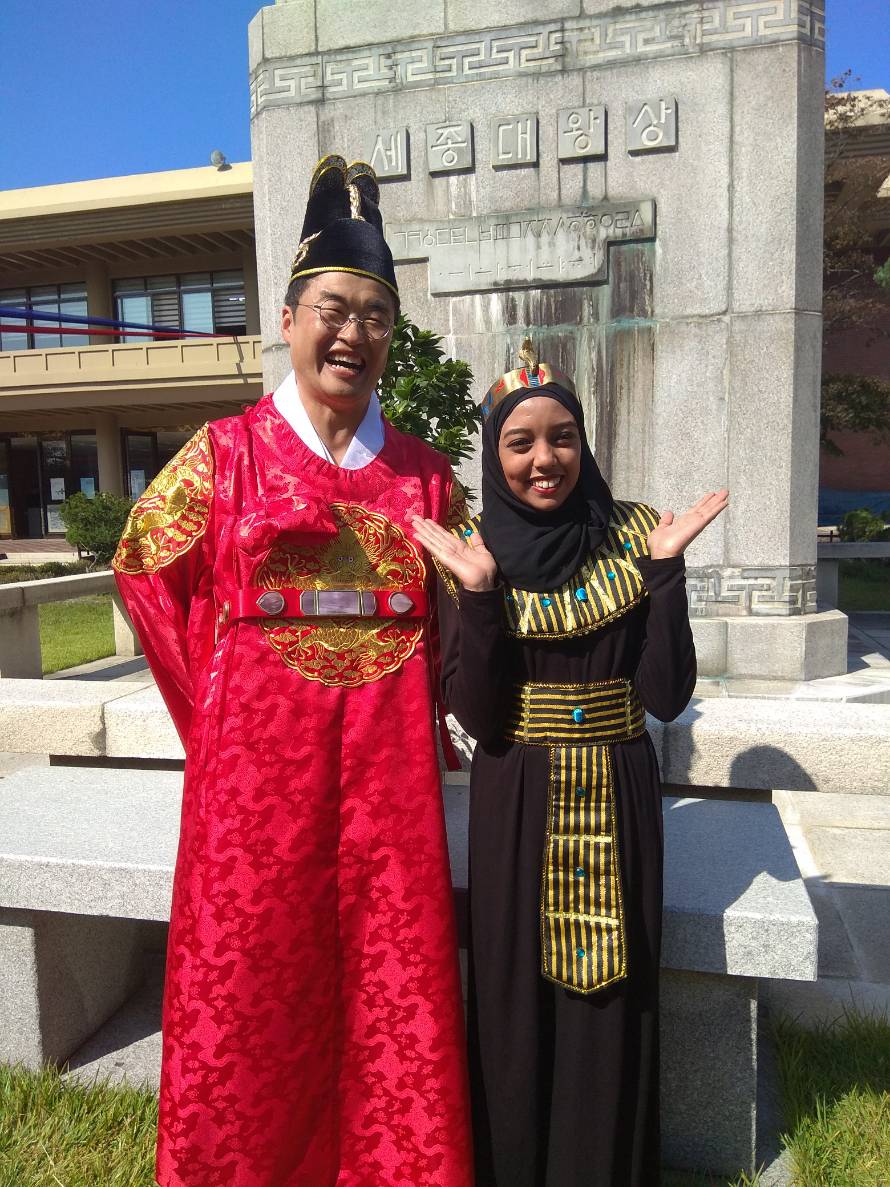 “I have always been passionate with South Korea; its language, culture, and food. However, the more I dug into its culture, the more I knew that Koreans barely know anything about Egypt. So, I decided to combine the two things I love the most in life, which are ancient Egyptian and Korean civilisations under one umbrella of raising Koreans’ awareness about our Pharaohs,” El-Demerdash told Daily News Egypt.

Dressed as a pharaonic queen with a long black gown and the famous golden crowns, Nour spent her days talking to people about the ancient Egyptian civilisation, the beliefs of kings and queens, and the burial chambers and tombs.

“When I say ‘Egypt’, most people did not know the location of the country. It was not until I said the Pyramids, when they started acknowledging it. Even then, they thought that the Egyptians are still living in the desert and use camels for transportation!” she described.

El-Demerdash was astonished to face the look people had down at her. With her “weird looking attire,” she was firstly thought as “a refugee who has no clothes or a beggar.”

However, her warm smile, determination, and consistency led dozens of people to stop and listen to her, as she described Egypt’s most famous touristic places, and the sunny weather to enjoy in the country.

The Egyptian souvenirs added a charm to her promotional efforts, which was met with huge success after few days.

“I took a large number of post cards, small statues, and papyrus papers, to leave something behind with every person I talked to. I even wrote behind every post card the name of the touristic place in Korean in order to encourage people to google these places,” she joyfully added.

It was not so long after digging in the Korean culture that the Nubian young lady noticed its quite closeness to her own culture, and that both countries are not culturally that far away from each other like most people may think. This is when she decided to also hold the flag of her heritage as a Nubian Egyptian woman, and wear El-Jerjar and expose it to Koreans, telling them about her hometown. 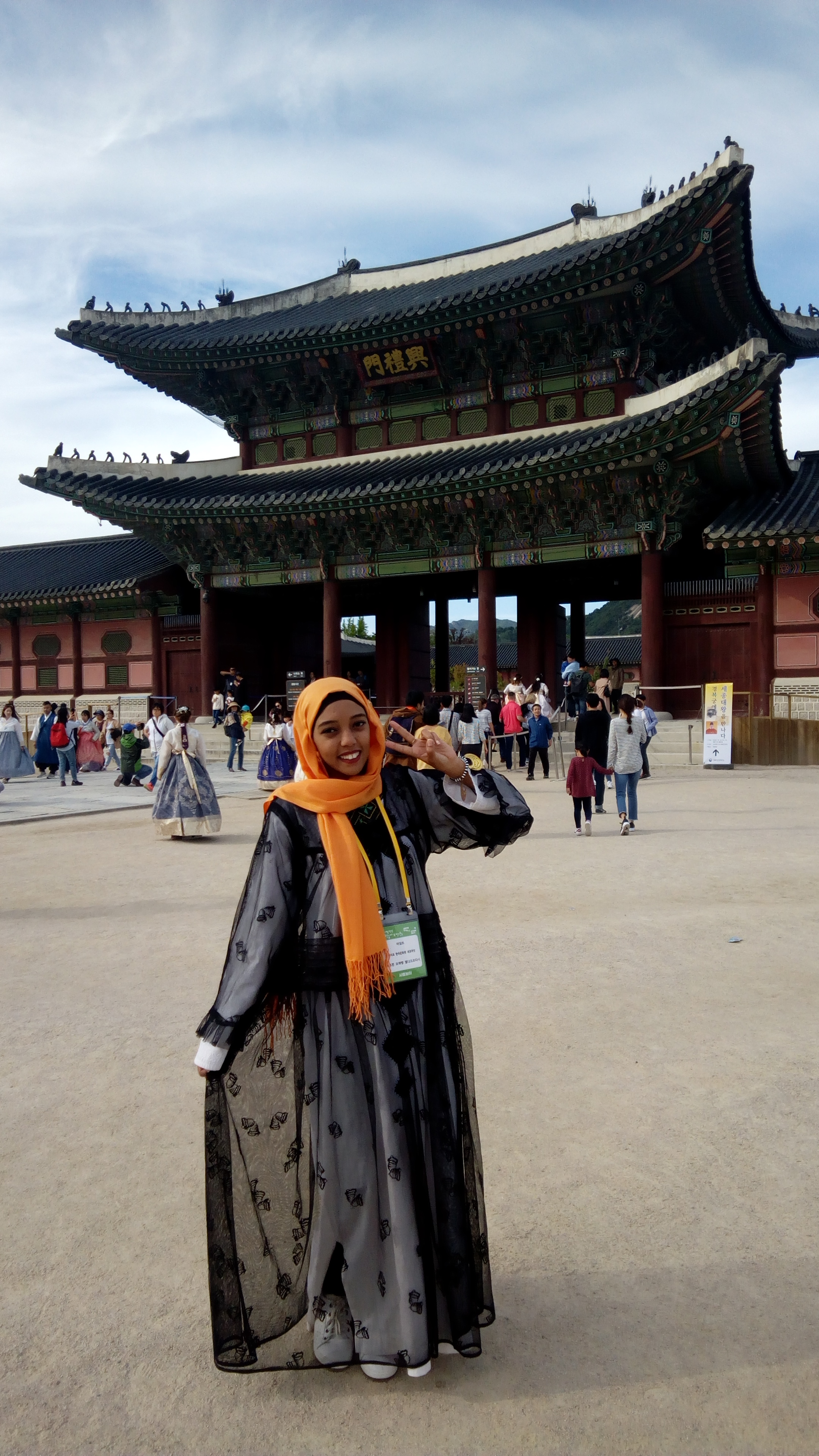 El-Jerjar is the traditional Nubian female costume. In Nubian culture, El-Jergar is a long-tailed dress. According to their belief, the dress’ tail has to be long enough to reach the ground beneath the girl who’s wearing it, in order to erase her foot trace. That way, no one knows the places she heads to or where she lives. Nubians believe that this is a form of protection and privacy.

“The dress led number of people to ask about it, So I explained more about the Nubian culture, and where I came from,” she said.

In her stay, Nour focused on changing the mainstream idea, the Koreans have about the Egyptians.

“Most of those who were aware of Egypt, previously met annoying Egyptians who did not respect their privacy or robbed them. That exceeded my determination in fixing the idea some mistakenly portrayed before,” she added.

Currently, El-Demerdash is helping Egyptians who are interested in learning Korean language through free courses to teach them alphabets and numbers.

“As I focused on raising Koreans’ awareness of our ancestors, I want to help the spread of the culture I love the most in Egypt,” she explained.

With the help of some colleagues, they roam governorates when they hold classes at public parks to teach groups the Korean language.

“At the end, I want to change the mainstream ideas in both countries, and bring both sides closer,” she concluded.