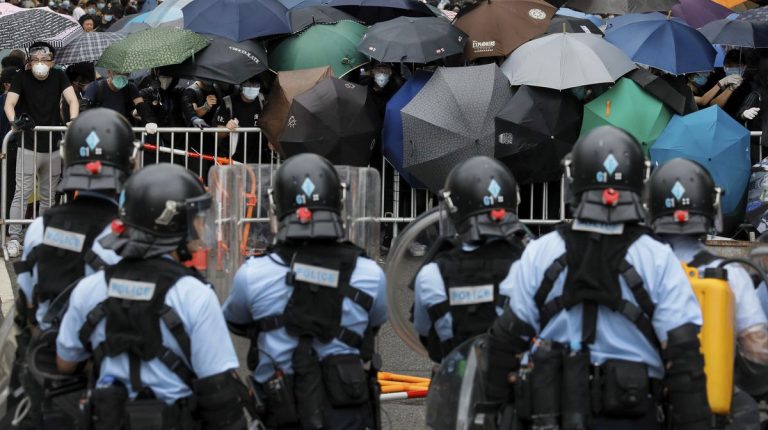 Tens of thousands of protesters marched in central Hong Kong’s Victoria Park on Monday, after recent rallies were characterized by violent clashes with police.

Despite the heavy rainfall, umbrella-ready protesters occupied a five-km-long stretch road in the city on Monday after the designated public park could not contain the large number of participants.

Hong Kong’s elderly and young children also joined in to express their anger over the government and police brutality. Organizers were quoted by AFP saying they hoped to return to a peaceful event after past weeks saw violent clashes between police and more hardcore protesters.

Police had granted approval for the rally but did not approve an accompanying march. Nevertheless, demonstrators filled the streets in central Hong Kong and said they were determined to show the government that they would not give up until their demands were met.

Public transit trains did not stop on Monday at stations close to the protest due to overcrowding.

The government’s reaction to the protests were criticized, however Hong Kong’s government defended what human rights group Amnesty International called a “heavy-handed” response during previous protests.

“Only when they were violently attacked and left with no choice did the police use minimum force to disperse protesters in order to restore social order,” a Hong Kong government statement said.

The statement added that 180 police officers had been injured in recent weeks and that officers have been “under tremendous work pressure” due to “long hours” and were only committed to maintaining law and order.

Protesters are demanding the resignation of the city’s leader, Carrie Lam, as well as fully democratic elections and an independent investigation into what they claim is police brutality against the protesters.

In the same context, Twitter accused the Chinese government on Monday of using its platform for an influence campaign targeting the protest movement.

“We are disclosing a significant state-backed information operation focused on the situation in Hong Kong, specifically the protest movement and their calls for political change,” Twitter said in an online post.

Some 936 core Twitter accounts, which originated from within China, attempted to sow political discord in Hong Kong by undermining the protest movement’s legitimacy and political positions, the company said.

Twitter suspended more than 200,000 automated accounts that had amplified these messages by engaging with the core accounts.

A company official told AP that the accounts were suspended for violating its terms of service and “because we think this is not how people can come to Twitter to get informed.”