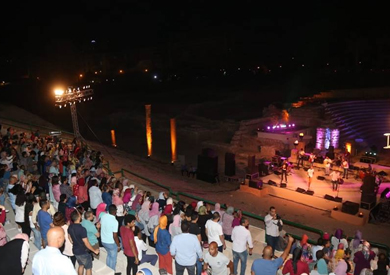 The Ministry of Culture announced that the 28th Citadel Festival for Music and Singing received over 15,000 visitors during its first three days from 18 to 20 August. The festival’s third day saw two big concerts performed by singer Mohamed Mohsen and underground band Massar Egbari.

This high turnover announced by the Ministry contradicts several testimonies by social media users claiming they were not allowed in the concert despite purchasing tickets due to excessive crowdedness.

Tickets for Mohsen and Massar Egbari’s concerts were sold for only EGP 20, supported by the ministry.

Minister of Culture Inas Adel Dayem expressed in a press release her happiness with the success of the festival that sends innovative cultural messages, stating that the “civilised attitude of the attending people is a positive feedback to the country’s effort in building citizens.”

On the other hand, dozens of social media users complained “organisational failure” which deprived them from entering the concert despite the availability of tickets at the entrance of the citadel.

Ahmed Bastan, one of the attendees, stated in a Facebook post that he was informed by the security that the place’s capacity is maximum 4,000 people, and the number of people who were allowed exceeded 5,000, “yet tickets were still being sold at the entrance!”

“I got in with a miracle, but [I saw] people with tickets who could not get in, and the security stated that the actual people who were allowed in were over 5,000,” he added.