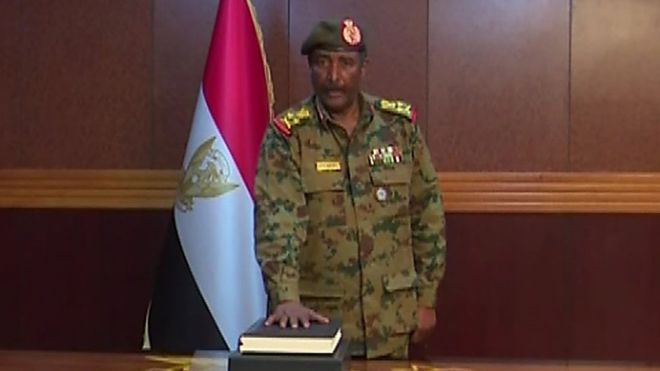 Head of Sudan’s Transitional Military Council (TMC), General Abdel Fattah Al-Burhan, was sworn in as the first leader of the newly established Sovereign Council on Wednesday, in front of the head of the country’s judiciary authority.

Based on his new post, Al-Burhan should lead a council of six civilians and four military officers as part of a planned 39-month-long transition to democracy.

On Saturday, the council and the Declaration of Freedom and Change, representing opposition, have signed a deal for the structure of the transitional authority within three years transitional period, paving the way to a new democratic dispensation.

The swearing-in ceremony was held at the presidential palace in Khartoum. The remaining 10 members of the council was sworn in later on Wednesday.

Burhan will lead the Sovereign Council for the first 21 months of the transitional period, and after that a civilian member will take over for 18 months until the scheduled elections in 2022.

On 11 April, the army overthrew Al-Bashir after months of protests against his rule. Al-Bashir is also wanted by the International Criminal Court for allegations of genocide in the western Darfur region.

The Sudanese professionals gathering which is leading the protests in Sudan, demanded accountability of Al-Bashir and members of his regime, clearing the country of corruption and nepotism, and easing the impact of the economic crisis that has worsened in recent years of Bashir’s rule.