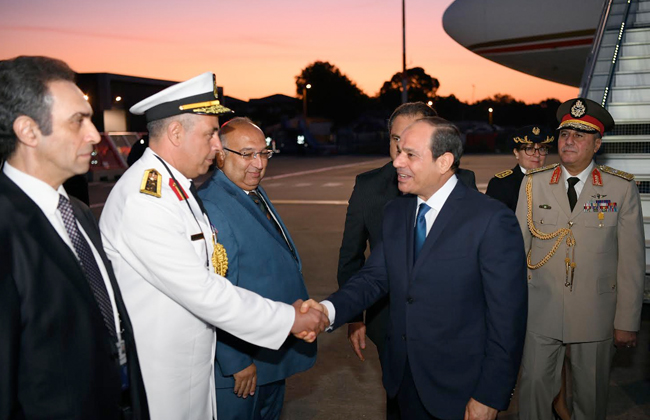 Al-Sisi, who is the current chair of the African Union, will deliver a speech at the G7-Africa partnership session during the G7 Summit on establishing peace and sustainable development, added the spokesperson.

This year’s summit will take up international security and fighting terrorism and extremism along with illegal migration, he added.

Fears over trade war and climate change hung heavy as world leaders gathered in southern France for the start of this year’s G7 summit on Saturday, with hopes low about leaders reaching a consensus by the end of the three-day meeting.

European Council President Donald Tusk warned that this gathering may be one of the last chances “to restore our political community.”

Speaking at a press conference, Tusk said this year’s meeting will be “a difficult test of the unity and solidarity of the free world and its leaders.”

Macron, who is hosting the summit in the resort town of Biarritz, said one of his main objectives is to “convince all our partners that tensions, especially trade tensions, are bad for everyone.”

Thousands of people gathered in the nearby town of Hendaye to protest against the economic and environmental policies, urging world leaders to take action on climate change and other issues.

The massive, ongoing fires in the Amazon rainforest are also topping the agenda this year, with Macron threatening to withhold an EU trade agreement if Brazilian President Jair Bolsonaro does not take action.

The G7 will launch “not just an appeal, but a mobilisation of all the powers there, but in partnership with the countries of Amazonia,” to fight fires and invest in reforestation,” Macron said.

The G7 contains seven countries which are the US, the UK, France, Germany, Italy, Japan, and Canada. In 1998, Russia was added and the group and expanded to G8, before it was excluded again in 2014 after Russia’s annexation of the Crimean Peninsula.

Last week, five people have been detained in France on suspicion of planning an attack on this weekend’s G7 Summit, authorities announced on Tuesday.

The suspects, who included “black bloc” anti-capitalists, were arrested on Monday for posting messages online encouraging attacks on a hotel accommodating police gendarmes during the 24-26 August talks. Four were released a day later.