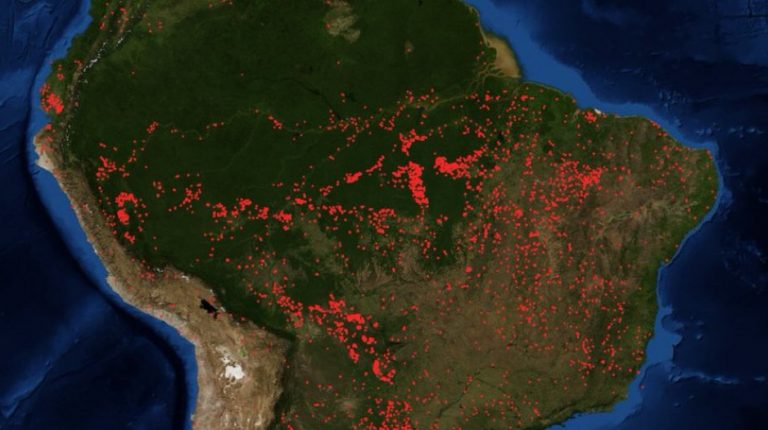 Brazilian President Jair Bolsonaro announced on Friday night that he would send armed forces to fight the fires in the Brazilian Amazon rainforest which drew the world’s attention in the past week, saying “the protection of the forest is our duty.”

Bolsonaro’s statements came just a few hours before the beginning of the G7 meetings in France. The G7 leaders have threatened to tear up a trade deal with South America over the Amazon fire.

After the release of documents that show that the Brazilian president is willing to hinder the conservation efforts in the Amazon rainforests to build bridges, motorway, and hydroelectric plants in the jungle, many bodies and environmental activists accused him of burning the jungles.

Defending himself, Bolsonaro accused non-governmental organisations of setting the jungles on fire in order to embarrass his government.

“We are aware of that and will act to combat deforestation and criminal activities that put people at risk in the Amazon…We are a government of zero tolerance for crime, and in the environmental field it will not be different,” he said in a presidential decree.

Amazon rainforests is the world’s largest rainforest, which covers more than 2.1m sqkm. It is referred to as the “lungs of Earth”. The forest produces between 6-20% of the oxygen in Earth’s atmosphere.

More than half of the world’s estimated 10m species of plants, animals, and insects live in the tropical rainforests in the Amazon Basin.

According to the Brazilian space agency (INPE), more than 75,000 fires were recorded across the Brazilian part of the Amazon forest. The new data showed an increase of 84% compared to last year.

The Amazon fire ignited an international row between Brazil in a side and France and Ireland on the other side. Both countries threatened to oppose the European Union (EU) trade deal with a regional South American bloc.

“Our house is burning, literally. The Amazon rainforest – the lungs which produces 20% of our planet’s oxygen – is on fire. It is an international crisis. Members of the G7 Summit, let’s discuss this emergency first order in two days!” French President Emmanuel Macron tweeted.

German Environment Minister Svenja Schulze said that the trade agreement between the European Union and Mercosur, the economic and political bloc comprising Argentina, Brazil, Paraguay, and Uruguay, “cannot be justified without guarantees that the rainforest will be protected.”

The US President Donald Trump said that he had spoken with the Brazilian president. He tweeted: “Our future Trade prospects are very exciting and our relationship is strong, perhaps stronger than ever before.”

Trump added: “I told him [Bolsonaro] if the United States can help with the Amazon Rainforest fires, we stand ready to assist!”