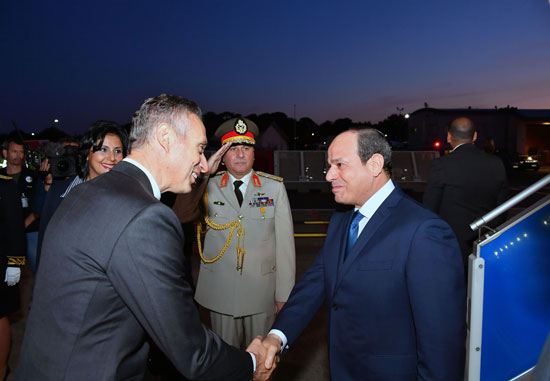 President Abdel Fattah Al-Sisi is on four-day visit to France ending Monday to attend the G7 Summit in Biarritz. This is the fourth visit by Al-Sisi to the European nation since he assumed power in 2014, while French President Emannual Macron had a very fruitful visit to Egypt in January 2019, when over 30 bilateral agreements were signed.

The current visit is mainly political and unlikely to witness new economic agreements between the two countries, informed sources told Daily News Egypt on condition of anonymity, asserting the importance of the visit to boost investment and political ties.

President Al-Sisi was invited by his French counterpart to attend the G7 Summit from 24 to 27 August, which shows that the international community seeks the support and cooperation with Egypt on various matters, such as fighting terrorism, illegal migration, Hassan Behnam, managing director of the French Chamber of Commerce and Industry in Egypt (CCFE), told Daily News Egypt.

The G7 comprises seven countries: the US, the UK, Japan, Italy, Germany, France, and Canada, which represent 40% of the global GDP, according to global media reports. It used to be known as the G8 (Group of Eight) until 2014 when Russia was excluded because of its annexation of Crimea from Ukraine.

“In my opinion, this summit is mainly political with some economic and investment consequences. Following the recent political crises in some European countries, such as Italy, Greece, Spain, the Brexit, and the problems faced by the German Chancellor, President Macron aims to appear as the coordinator of Europe and gain more credit as the leader of the EU,” Behnam said.

Moreover, Behnam noted that Al-Sisi’s participation in the G7 Summit is yet another sign that Egypt is recovering rapidly in terms of economy and foreign policy, adding that the president’s talks with the global leaders will certainly have a positive impact on Egypt’s local economy and pave the way for more investments in the country.

“Personally, since 2014, I have always been optimistic about Egypt’s future and I am proud to see that Egypt is back on track, witnessing rapid development in several sectors,” he mentioned.

Egypt offers stability, relevant infrastructure, administrative facilities, and new investment legislation so it can be a gateway to the huge African market, he explained, adding that Egypt enjoys outstanding geopolitical situation, as the majority of western countries need to have good relations with Egypt, particularly due to the importance of the Suez Canal.

Egypt’s trade exchange with France reached about €2.5bn annually, of which €1.7bn worth French exports to Egypt and the Egyptian authorities aim to increase the country’s exports to France which is a good sign of the development of the Egyptian economy, DNE reported in July.

Additionally, a governmental source reiterated that the presidential visit to France will not witness new economic agreements between the two countries, yet both will discuss boosting cooperation to attract new French investments to the Egyptian market.

French investments in Egypt are increasing

France is one of the largest investors in Egypt, with a very diversified package of investments in various sectors, including infrastructure, industry, traditional and renewable energy, telecommunications, information technology, banking, and insurance, the source said.

French investments in Egypt are worth $5bn through 160 companies that provide 50,000 direct jobs, the source mentioned, asserting that the positive economic reforms in Egypt encouraged the French companies to inject more investments in the market which emphasises their confidence in the promising opportunities that the market offers.

The French companies realise the positive procedures that the authorities made to improve the market’s attractiveness and enhance the investment climate, he mentioned, asserting the importance of the governmental efforts to solve the problems that French companies were facing in Egypt.

The government was able to solve the problems that some firms faced, including Crédit Agricole and Decathlon which is specialised in sportswear, the source explained, noting that the government follows other French companies to solve any challenges that may appear in the future.

Additionally, Orange increased its investments by €750m in 2018, creating around 8,500 jobs in projects that support training young people, innovation, and entrepreneurship in Upper Egypt, the source revealed, asserting that the company aims at promoting its presence in Upper Egypt, where it will open a communications centre for the company’s services at the Technology Park in Assiut.

Orange’s new centre is expected to provide about 500 job opportunities, the source mentioned, noting that the company will also provide training for about 2,000 youth.

Moreover, Schneider Electric has increased its capital by €20m which created 230 new job opportunities, the source added. It’s a French international company that is specialised in the development of integrated software for automotive components. It’s one of the most prominent success stories of international companies in Egypt.

Saint-Gobain, a French company for glass and building materials, which has $150m investments in Egypt and a turnover of $100m annually, intends to announce new €8m investment in a new production line, the source revealed.

Also, Renault intends to open a car assembly factory in Egypt and it’s currently studying the project, the source mentioned, noting that three other French companies are looking for opportunities to enter the market especially in the automotive feeding sector, food processing, and textile industries.

Behnam said that most major French companies are already investing in Egypt, adding that Total Egypt is implementing expansion plans as well as SE and Danone.

“Total Egypt is continuing to develop lubricants through the development of direct sales to industry, the expansion of its geographic coverage, and the signature of contracts with importers and large automobile dealers. Total Egypt is ranked number two in the car dealer segment behind the market leader. Total Egypt is a subsidiary of Total established in 1998,” according to the company’s website.

During Macron’s visit to Egypt in January, he signed about 32 agreements in both public and private sectors. The agreements were diversified including infrastructure, roads, building materials, tourism, culture, and construction which is a labour-intensive sector, the source noted.