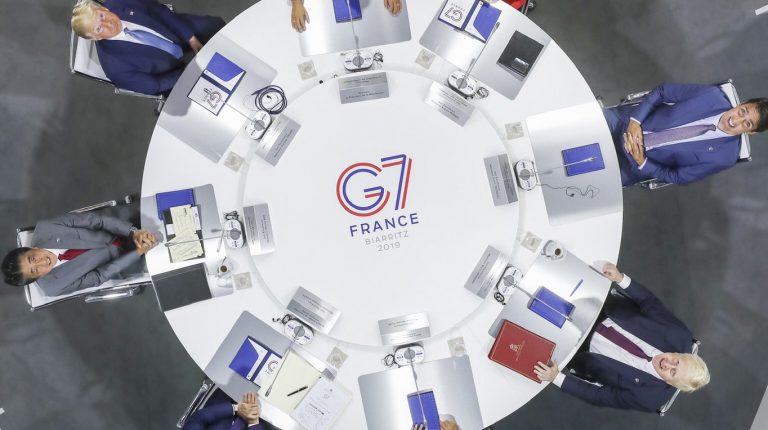 As the G7 group of nations conclude their 45th summit meeting in the French resort town of Biarritz for what will be its 45th summit. Daily News Egypt provides a break down to the summit, explaining its purposes, members and the most important events that took place.

What is the G7, and its purposes?

The G7 (or Group of Seven) is an organisation made up of the world’s seven largest so-called advanced economies: Canada, France, Germany, Italy, Japan, the United Kingdom and the United States.

The group regards itself as a community of values, with freedom and human rights, democracy and the rule of law, and prosperity and sustainable development as its key principles.

Throughout the year, ministers and government official from the G7 countries hold meetings to discuss matters of mutual interest.

The G7 presidency is rotational, as each member nation takes over the presidency, and host the annual two-day summit meeting.

Following the summit, a communiqué is issued, outlining what has been agreed. US President Donald Trump told reporters on Monday that China had contacted US trade officials overnight to say they wanted to return to the negotiating table.

Trump statements came on the sidelines of the G7 Summit, where he hailed Chinese President Xi Jinping as a great leader and said he welcomed his desire for a deal and calm.

“One of the reasons China’s a great country is they understand how life works,” Trump told reporters during a morning meeting alongside Egypt’s president Abdel Fattah Al-Sisi.

“I have great respect for it. This is a very positive development for the world,” Trump stressed.

The two countries have been on an increasingly bitter trade war, with both sides imposing more tariffs on each other’s exports.

“It’s been really good. It’s not quite over yet, but I will tell you we have had great unity,” Trump said before a meeting with German Chancellor Angela Merkel.

Merkel said that she’d be “very glad” if the US and China can end their bitter trade war.

World leaders announced on Monday that they are preparing to help Brazil battle wildfires sweeping across the Amazon region.

Speaking at the G7 summit in Biarritz, French President Emmanuel Macron said summit leaders were nearing an agreement on different ways to support Brazil to control the fires.

Macron revealed that the agreement would involve both technical and financial mechanisms “so that we can help them in the most effective way possible.”

In the same time, Brazilian far-right President Jair Bolsonaro announced that he mobilised tens of thousands of soldiers to help fight fires, which have caused global alarm. However, only a few hundred troops had been sent so far.

Brazil’s satellite monitoring agency has recorded more than 41,000 fires in the Amazon region so far this year, with more than half of those coming this month alone. 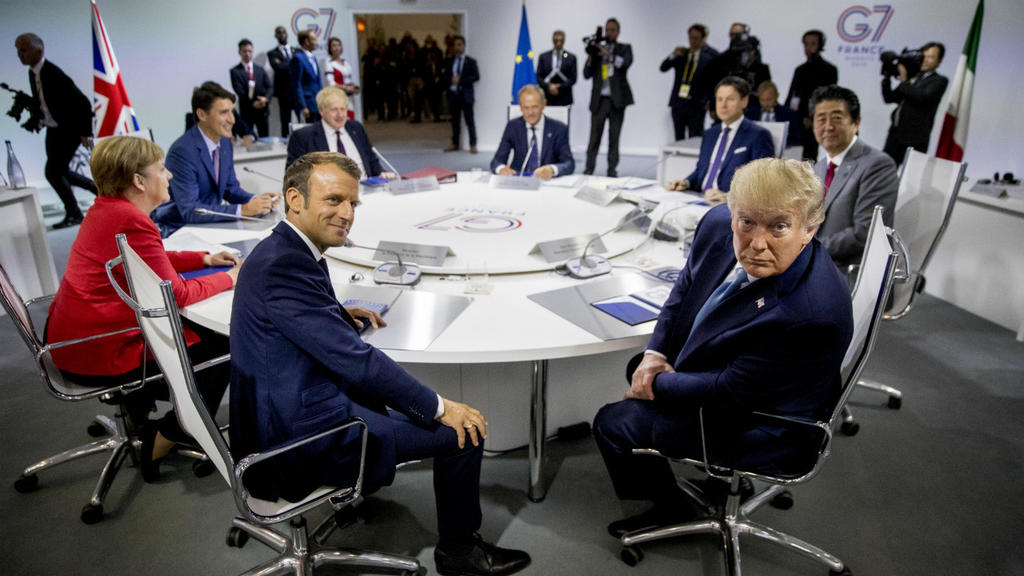 Japan, US inch closer to a trade deal

The US and Japan agreed in principle on the basic features of a trade deal on Sunday.

US President Donald Trump and Japan’s Prime Minister Shinzo Abe said they hoped to sign the agreement in New York next month.

Trump told reporters at the G7 that Japan had agreed to buy excess US corn that is burdening farmers as a result of the US-China trade war.

“It’s a very big transaction, and we’ve agreed in principle. It’s billions and billions of dollars. Tremendous for the farmers,” Trump explained. Farmers were the main losers of Trump’s trade dispute with China, hence, Trump aims to resolve the problem particularly in political swing states that he needs to support him in his bid for re-election in 2020.

When signed, the agreement eases the trade cold-war between the two allies. US trade representative Robert Lighthizer revealed that the new deal includes agriculture, industrial tariffs and digital trade. However, Auto tariffs would remain unchanged.

However, Japan’s Prime Minister said that more work is still needed, adding that he is optimistic that it can be finalised by the time of the United Nations General Assembly in September.

Abe added that “we would like to make sure that our teams … accelerate the remaining work for us to achieve this goal of realizing the signing of the agreement on the margins of the UN General Assembly at the end of September.”

In response, Abe said, “We believe that there is a need for us to implement emergency support measures for the Japanese private sector to have the early purchase of the American corn.”

The deceleration dictates that the leaders of G7, Egypt (current chair of the African Union), Rwanda

(former chair of the AU), South Africa (future chair of the AU), Senegal (chair of NEPAD), Burkina Faso (chair of the G5 Sahel), and the African Union Commission Chairperson, to review the international situation, recent developments in Africa, address the main challenges of the African continent, including eradicating poverty, ensuring the full realization of the right to education, providing good quality health care and increasing access to clean water.

Moreover, the declaration focuses on fighting inequality, strengthening governance and

promoting inclusive sustainable economic growth, in the framework of a prosperous the global economy, and social development.

Promoting entrepreneurship was one of the main goals of the agreement, along with and private sector youth employment in Africa through multilateral initiatives. Women empowerment topped the agenda, as the leaders called for reforms to address the social, legal and regulatory barriers to women’s 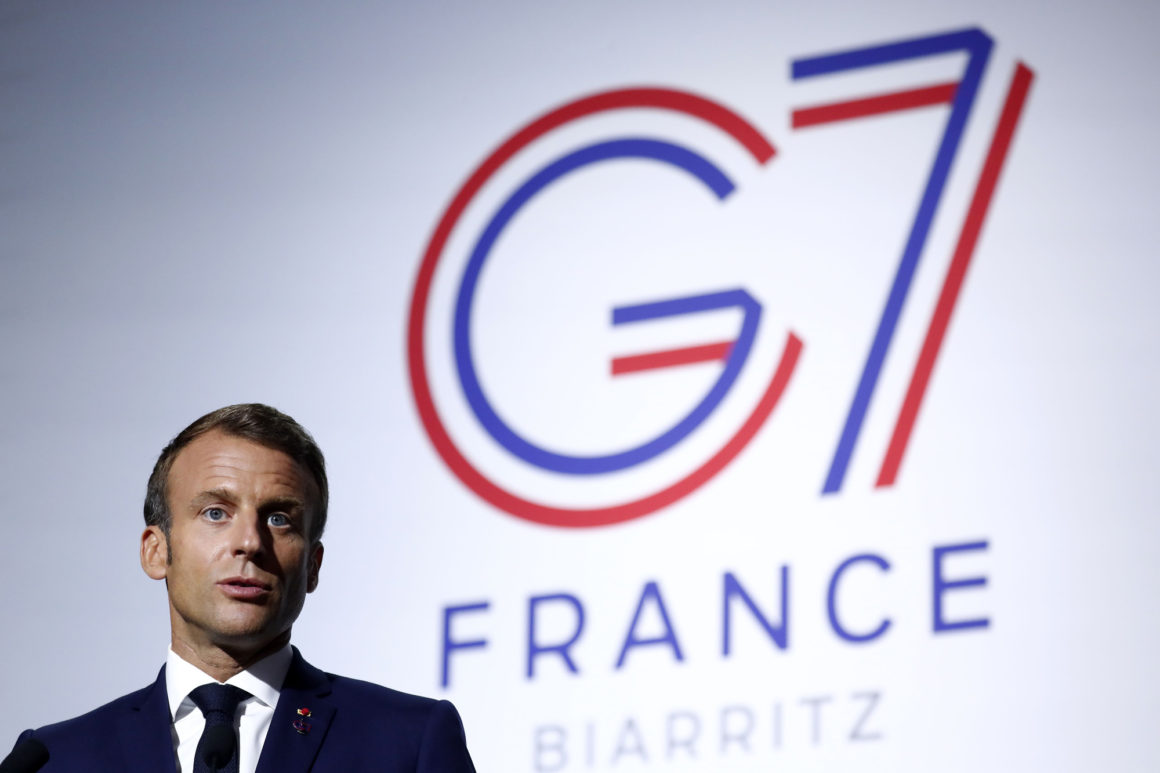 On Sunday, Trump demanded the re-admission of Russia into the G7, sparking heated debates on the matter. Russia was removed by the previously named G8, following the annexation of Crimea in 2014.

French President Emmanuel Macron and European Council president Donald Tusk expressed their opposition to Trump’s suggestions, stressing that only liberal democracies should be in the group, and for that reason they cannot allow Russian President Vladimir Putin back in.

On the other hand, Italian Prime Minister Giuseppe Conte – who announced his resignation earlier this week – supported Trump’s proposal, position.

Trump told reporters in Biarritz that “It’s certainly possible, we’ll see,” based on a conversation among the members that happened the previous night.

“We had a very good discussion on Russia and President Putin, and a lively discussion, but, really, a good one,” Trump said.

British Prime Minister Boris Johnson agreed with the comment, and added that “It was lively.”

Among the G7’s promising partnerships is the Sahel Partnership Action Plan which acknowledges that the Sahel faces acute risks of destabilization, with security crises fuelled by multiple factors of fragility.

In the partnership, the G7 countries also upon the rest of the international community, including financial institutions, to intensify their efforts in support of Sahel region, asserting the need for all stakeholders to enhance, coordinate and align their activities with the priorities of the G5 Sahel.

The G7 also said they are alarmed by the deteriorating security and humanitarian situation, and in

particular by the spread of inter-community violence, in the Sahel region, which has

been compounded by growing instability in the Lake Chad Basin.

They said they will remain committed to working with Sahel countries to improve and better coordinate efforts to enhance their defence and internal security capabilities, including through support for structural reforms of their security apparatus.

The countries also praised the establishment of a Partnership for Security and Stability in the Sahel, which it hopes will bring together countries in the region and their international partners. The partnership will aim to identify security needs and increase the effectiveness of the domestic defence.