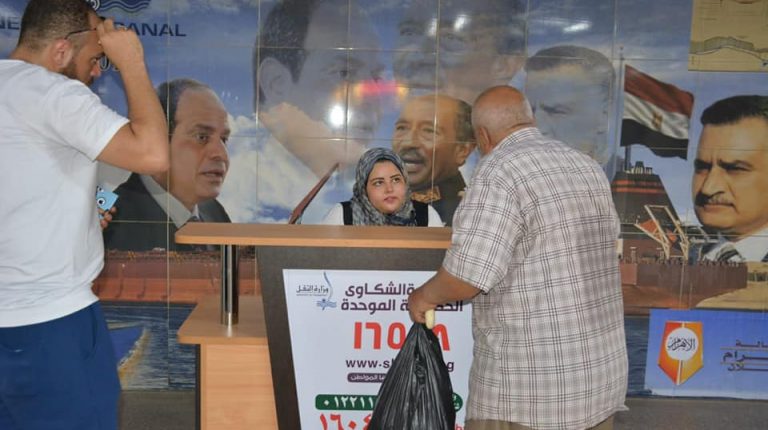 Egypt has established several centres to allow people express their views or voice their concerns over public services, starting with the unified government complaints system affiliated to Egyptian cabinet through opening offices to receive citizens’ complaints at metro stations. It comes as free expression alternative rather than social media or street protests.

Early August, the National Authority for Tunnels has allocated a number of offices in each metro station to receive citizens’ complaints, as they receive millions of commuters daily, giving the people the chance to express their thoughts and send suggestions to the government.

This came after Prime Minister Mostafa Madbouly instructed speed dealing with citizens’ complaints to make life easier for them. He also ordered developing a new mobile application named “at your service” and linking it to the unified government complaints system. 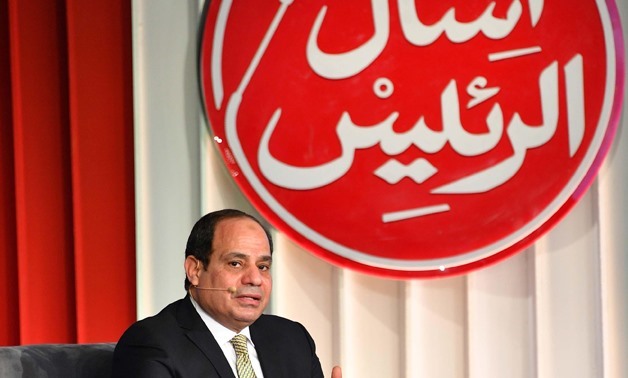 It’s easy to use the new app. Citizens can create an account and write their complaints, then choose the competent authority and just click send. They can later open the website to view the ministry’s response. The allocated offices in metro stations offer tablets to citizens to submit their complaints.

After putting legal restrictions on protest in 2016, Egyptians started using social media platforms to express their concerns and complaints about public services, leading to misunderstanding between citizens and the government, therefore the state created the unified complaints system to receive the people’s comments and respond to them.

Egypt’s parliament was the main authority that receive citizens’ complaints, suggestions, and comments, but this was somehow ineffective.

Social Justice Platform (SJP), an independent research centre, stated in a report released on Saturday, that most of street protests turned into complaints (1,070), either sent or handed to officials and members of the parliament, or sent to newspapers.

“Sending complaints is a type of protest that has been on the rise since 2017,” the report said.

The report that tackles protests in first half (H1) of 2019, reported information based on data collected from media reports from a different array of outlets, including governmental, independent, privately-owned, pro-state media outlets, and others affiliated with political parties.

Speaking on the nature of people’s issues, the report said that protests with social demands reached 1,121 protests, marking 86.03% of total protests in this period, while labour protests came second recording 94 protests, and finally protests with economic demands were third recording 88 protests.

The research said that around 1,303 protests in 1H19, in which Egyptians expressed their dissatisfaction with their economic and social conditions.

The report highlighted that 88 economic protests were monitored in the last six months, either by farmers, lawyers, or journalists, or drivers, against policies that hinder their work, in addition to 94 labour protests were documented, of which 41 carried by stable workforce, while the rest were held by unstable labour. Of these protests, 41 were held in public sector workplaces, 15 in the public enterprise sector, and 38 in private 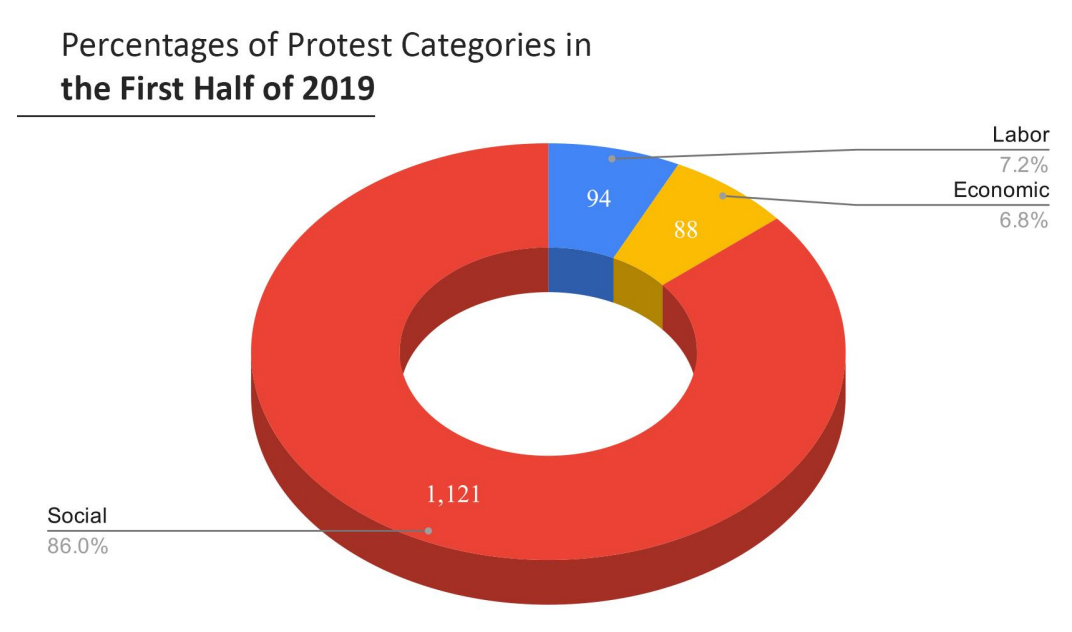 MP Hammam El-Adly, head of the parliament’s suggestions and complaints committee, said in a press statement that the Egyptian government’s efforts to listen to citizens and the establishment of a new system to receive complaints is an extremely important step, and it reflects government’s seriousness in listening to citizens’ complaints and working to overcome them according to available resources.

“Egypt had witnessed a huge drop in communicating with citizens in the past years, but the situation changed after opening doors for people to voice their concerns, and this is a positive step that should be highlighted,” he said.

Al-Adly said that online portals are not enough, but every official in the Egyptian state institutions should work to solve the problems of citizens, pointing out that there are steps that had been taken on solid ground which already confirms seriousness in listening and responding.

A statistic was issued in August by the unified government complaints system revealed that 1,663,343 complaints and inquiries were received from citizens through its electronic portal, since its establishment, on the state administrative apparatus, bureaucracy, and corruption issues.

The statistics showed that the percentage of settlement of these complaints and inquiries submitted by citizens amounted to nearly 85%, and that the remaining part is being studied by the concerned authorities.

The unified portal is a modern interface for the government and aims to achieve direct communication with the Egyptian citizens through information and communication technologies to alleviate suffering and in order to improve the level of services.

The portal of the unified government complaints system is the main tool in receiving, reviewing, and verifying complaints before forwarding them to the competent authority, and even evaluating the responses and informing the citizen of the final response and then closing the complaint. 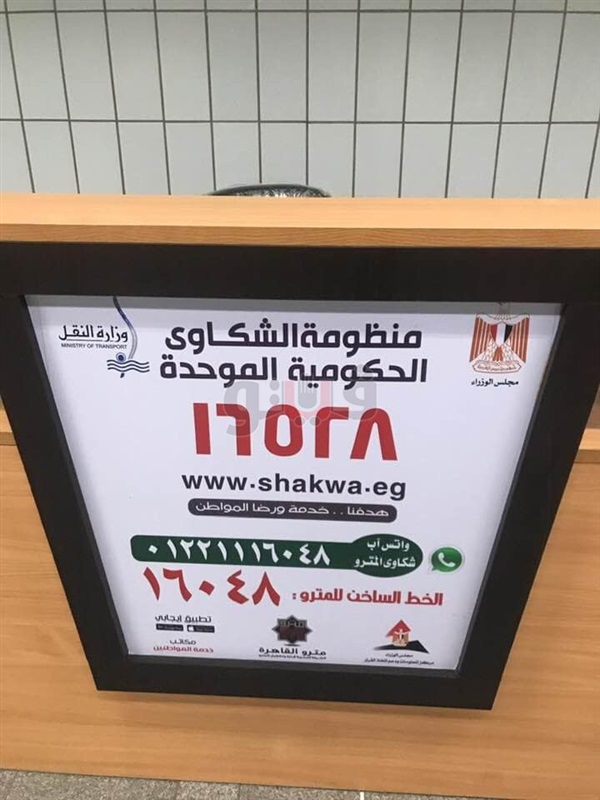 Other sectors in the state also have created complaints committee to receive their users’ comments and suggests. The Egyptian National Railways allocated a phone number to receive passengers’ complaints and suggestions via Whatsapp, especially in connection with booking train tickets, in support of the initiative to improve the level of service provided to passengers and achieve a quick response to passenger complaints.

Head of the Egyptian National Railways, Ashraf Raslan, said he has offered other means to receive complaints, including the website of the authority to respond immediately to the complaints of passengers, explaining that they have obtained a certificate from the cabinet’s complaints system confirming that the rate of response to complaints in the authority reached 100%. The complaints were mostly related to delays in appointments, problems with cashiers and train missing, as well as train delays.

Media outlets including independent newspapers Youm Sabea, Sout Al-Omma, and Al-Watan have also contributed in strengthening communication between the state and citizens by opening complains portals so their readers can send their complaints and they can forward them to the government.

Moreover, “Ask the President” initiative was launched in 2018 to offer people the opportunity to submit questions on politics, economy, as well as social and security issues. The initiative opens two weeks before the annual National Youth Conference, so the president can answer the questions during a specialised session. A number of “Ask the President” sessions were held during the World Youth Forum last year.