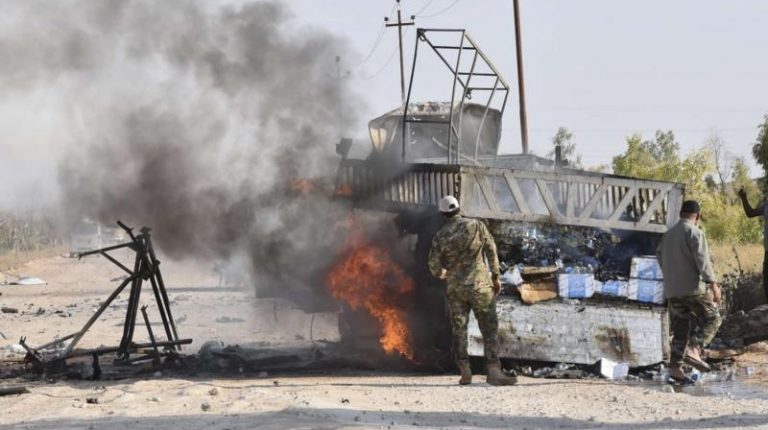 For the second day in a row, the Israeli Air Force launched airstrikes targeting points at the Lebanese and Iraqi border with Syria, as reported by local and international media.

The targets included the general command of Popular Front for the Liberation of Palestine- General Command (PFLP-GC) in Qousaya village in Lebanon’s Beqaa Valley close to the border with Syria.

The strikes come a day after two Israeli drones, crashed in the Hezbollah-controlled southern suburbs of Beirut, as reported by the official Lebanese National News Agency(NNA).

Officials from the PFLP-GC told international media that the three Israeli airstrikes caused only material damage and there were no casualties, adding that anti-aircraft fire was launched from the position.

Meanwhile, the Israel Defense Forces (IDF) did not claim responsibility for the attacks, as Israeli military spokeswoman told Reuters “we do not comment on foreign reports.”

Israel was also accused of carrying out “deadly” air raids against the Iran-backed Popular Mobilisation Forces (PMF) in Iraq. The strike left one commander dead and wounded another near the border with Syria.

However, the PMF said that one of the two airstrikes targeted the headquarters of a local paramilitary brigade, while the other struck a convoy of cars leaving the building.

Furthermore, the PMF has blamed Israel for the attack and accused the United States of providing air support. Similarly, the Israeli military spokeswoman declined to comment.

Despite the international condemnation for the Israel Saturday’s strikes which targeted Syria and Lebanon, United States Secretary of State Mike Pompeo said on Twitter “I support Israel’s right to defend itself from threats posed by the Iranian Revolutionary Guard and to take action to prevent imminent attacks against Israeli assets.”