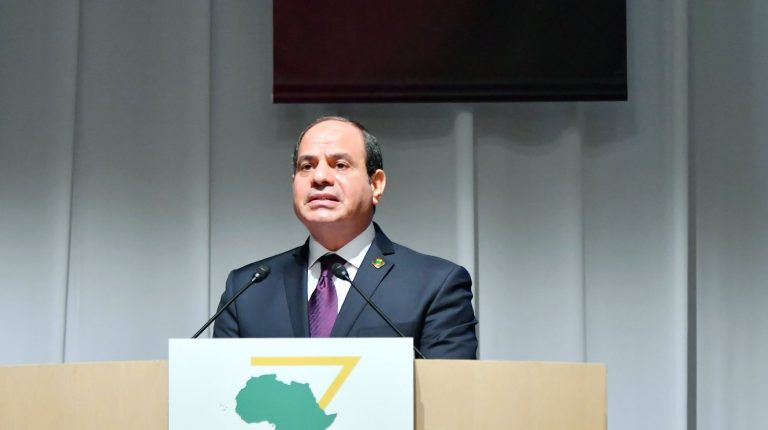 President Abdel Fattah Al-Sisi on Wednesday said Japan is Africa’s oldest strategic partner, and their relationship is based on cooperation and promoting development efforts in the African continent since the launch of the Tokyo International Conference on African Development (TICAD7) in 1993.

During his speech at the opening session of the 7th TICAD, Al-Sisi said: “I can confirm today that our partnership in the framework of TICAD has achieved plenty of achievements, and has reacted positively to international and regional conditions.

The President stressed his aspiration that the summit could come out with tangible and viable results in order to increase cooperation between Japan and the African Union (AU) countries, especially as their people are waiting for the outcomes of this summit.

Al-Sisi also called for intensifying scientific and development cooperation between Africa and Japan to benefit from the natural capacities of the African continent in energy resources, through supporting renewable and clean energy projects, thus contributing to mitigate the environmental effects of climate change.

On behalf of Africa, as the chief of the AU, the president also invited international private sector institutions and multinational companies to invest in Africa.

He further called on international, continental, and regional financial institutions to play their role in financing Africa’s development and to provide financial guarantees for the capacity-building of the continent that would contribute to trade promotion and encouraging investment.

Al-Sisi also expressed his appreciation for TICAD support for the ambitious plan to achieve stability across Africa by 2020. He added that there is still a long way to go to turn that painful page of conflict history, which has undermined development hopes and created a fertile environment for the spread of extremism and terrorism in the continent.

He further underlined the urgent need to support the AU Post-Conflict Reconstruction and Development (PCRD) policy, which works to fortify countries emerging from conflict against relapse risks, and build the capacity of state institutions to carry out their tasks in protecting their countries in order to consolidate peace and stability.

The president stressed the need to upgrade the African infrastructure through the implementation of transboundary projects, such as the Cairo-Cape Town land link project, the North-South electricity linkage project, and the Lake Victoria-Mediterranean Sea navigation line-linking project.

On the sidelines of the summit, President Al-Sisi held talks with Japanese Prime Minister Shinzo Abe in Yokohama on Wednesday morning.

During the meeting, Abe praised Egypt’s development achievements, especially the economic reform, and the implementation of several mega national projects, which contributed to motivating Japanese companies to invest in Egypt. Abe stressed his country’s keenness to develop its relations with Egypt because of Egypt’s pivotal role in the Middle East and Africa.

The meeting also reviewed a number of issues related to bilateral cooperation, especially education, culture, technology, energy, and transport, in addition to the Egyptian Grand Museum, which is an icon of cultural and civilisational cooperation between the two countries, according to the statement of the presidency’s spokesperson Bassam Rady. He added that the construction of the museum would support the tourism sector in Egypt.

Moreover, Al-Sisi pointed out to Egypt’s aspiration to attract more Japanese companies to invest in Egypt and participate in various projects.

The talks also touched on a number of regional issues of mutual interest. The Japanese Prime Minister expressed his country’s support to Egypt’s efforts in the fight against terrorism and extremist ideologies in the Middle East.

“Let me make a promise,” Abe told the TICAD, “The Japanese government will do its utmost so that our private-sector investment in Africa, which came to $20bn over the past three years, will be expanded continuously,” Abe added.