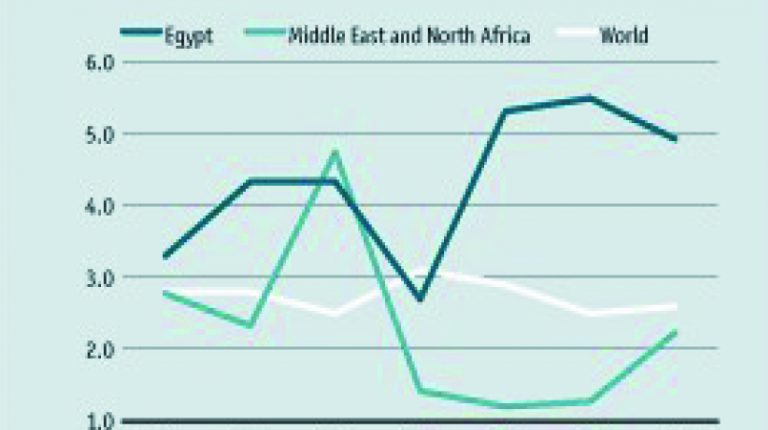 Egypt’s economic reform programme agreed with the IMF will ensure some progress on fiscal consolidation, efforts to reform the fiscal and business environment will continue throughout 2019-23, albeit at a modest pace, The Economist Intelligence Unit said in a report.

The report does not expect Egypt to seek a new funding deal with the IMF when its current agreement expires later in 2019, given its improved funding position.

Furthermore, the report cites the continuous fall of unemployment, the fact that growth becomes increasingly broad-based, and the easing inflation as factors to support the country’s stability.

The fiscal deficit will narrow from 9.5% of GDP in fiscal year (FY) 2017/18 (July-June) to 6.0% of GDP in FY 2022/23, as a result of rising tax revenue and lower subsidy spending. The current account will move into surplus from 2021, owing to lower oil import costs in the second half of the forecast period and as export growth outpaces import growth. In the short term, economic policy will continue to be shaped by IMF-agreed conditions, the report said, explaining that Egypt is now able to raise funds elsewhere.

It is therefore unlikely to seek a new IMF programme once the current one expires and, if it does, it is likely to be a looser, unfunded arrangement.

The report cites the government economic reforms, including the introduction of value-added tax (VAT); fuel subsidy cuts, and the structural reforms to address deficiencies in the business environment such as the 2017 Investment law.

“Positively, the Central Bank of Egypt (CBE) has relaxed most capital controls (introduced in 2011), owing to the growing availability of hard currency and improved access to foreign capital markets, although rollover risks remain,” the report said.

Furthermore, according to the report, water, and rail infrastructure and addressing rural underdevelopment—especially in the Sinai region—will be prioritised.

In regards to Egypt’s aspiration to turn into a regional gas hub, the report believes that Egypt will also consolidate its incipient role as a regional energy hub for the Eastern Mediterranean, citing the signed export deals with Jordan, effective from 2020, and with Israel for gas transport and processing.

The Economist Intelligence Unit believes that government policy will seek to balance the goal of achieving fiscal sustainability—as illustrated by the continued reduction of the budget deficit as a share of GDP, with containing public discontent over the ramifications of economic reform through supportive transfer payments for the less well-off.

The report indicates that Egypt’s public finances will be strengthened in 2019-23 by rising tax revenue, in tandem with continued robust GDP growth.

Accordingly, the government will gradually divert spending away from subsidies towards public services such as healthcare and education.

The report forecasts that Egypt is likely to keep the corporate tax rate unchanged at 22.5% to encourage investment.

“The narrowing (albeit still large) deficit will reduce crowding-out and should allow local interest-rate cuts, reducing the cost of companies’ borrowing from domestic banks. We expect the fiscal deficit to narrow in FY 2018/19 to 7.3% of GDP, from 9.5% of GDP in FY 2017/18,” the report added.

Thereafter, the report forecasts that Egypt’s budget deficit will narrow to 6.0% of GDP in FY 2022/23. International sovereign bonds will finance the bulk of the deficits, with multilateral and bilateral borrowing likely to cover the remainder, according to the report.

Inflation to decline further, EGP sharp gains might be reversed

On the monetary front, the report indicates that once subsidy reform costs have been absorbed, with inflation trending down and interest rates moving down globally, further loosening is likely in the medium term.

However, the report indicates that the CBE will proceed in monetary easing with caution, due to the risk of currency volatility, although concerns about capital outflows are easing.

“In the short term, some of the recent sharp gains in the pound are likely to be reversed, but, in the longer term, there is potential for more real exchange-rate appreciation,” the report mentions. 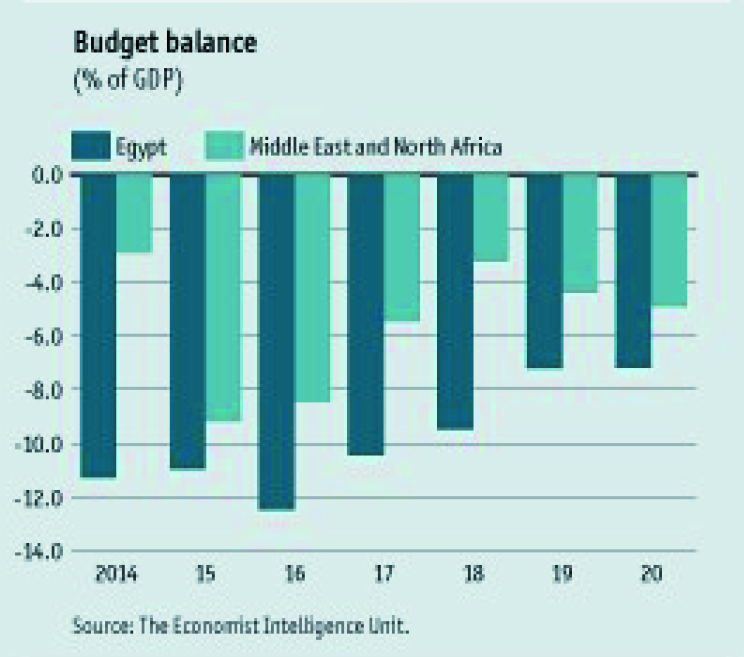 Furthermore, the surplus will edge up to 1.5% of GDP in 2023 because of rising goods exports and tourism earnings, according to the report.

Within the political analysis part of the report, some information on the outlawed Muslim Brotherhood-linked militant groups was presented, such as Hasm and Lewaa Al-Thawra. The report indicated that the two groups have carried out attacks on state and security officials, besides targeting touristic sites since the ouster of the Islamist president Mohamed Morsi in July 2013.

The report said that public sympathy for the Brotherhood has ebbed and the sweeping anti-terrorism offensive launched in February 2018 has inflicted severe damage on terrorist infrastructure, and has helped to restore the fortunes of Egypt’s vital tourism sector.

Regarding counter-terrorism, The Economist Intelligence Unit expected that the February military operation will continue to reduce the number of attacks.

On the delayed municipal elections, the report explained that it may take place towards the end of 2019 or early 2020 instead, noting that these elections are particularly important for companies as these local councils will implement Egypt’s new, streamlined investment regulations at the municipal level.

On the foreign relations, the report noted that Egypt’s priorities will remain centred on maintaining cordial ties with the US and the EU, and building a broadening range of international links, including deepening relationships with Russia and China.

The report expected that Egypt, the UAE, and Saudi Arabia to maintain close ties and increase joint efforts against security threats from Islamist groups and in the Red Sea and to broadly align over Libya.

On Egypt’s relations with European and Asian suppliers of military hardware, the report indicated that it will remain a priority in the context of Egypt’s security campaigns and rising geopolitical tensions in the gas-rich Eastern Mediterranean region, where Egypt is taking an increasingly central role in developing the resource.