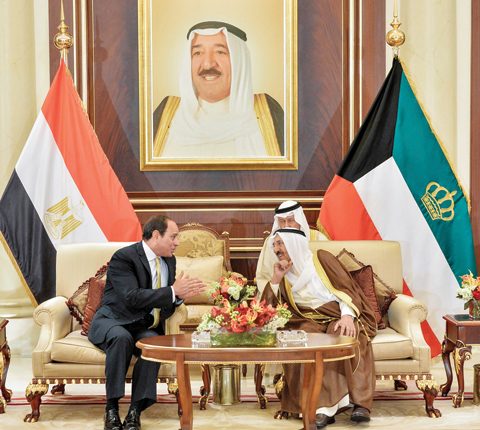 Both sides are to address regional and international issues of common interest. The pair also is expected to sign cooperation agreements to enhance bilateral relations, according to state-run MENA news agency, citing Egyptian Ambassador to Kuwait Tarek El Kouny.

El Kouny revealed that the official talks between the two leaders will be held on Sunday. He added that Al-Sisi will also meet with several top Kuwaiti officials during his visit, MENA reported.

Egypt and Kuwait enjoy strong relations at all levels including trade exchange are estimated at around $3.2bn.

Meanwhile, Kuwait ranked 4th among countries investing in Egypt, the third Arab country, recording $4.7bn, through 1,302 companies, according to Kuwaiti Minister of Finance Nayef Falah. The areas of cooperation include “building and construction, industry, agriculture, and finance.

Al-Sisi visit to Kuwait followed his participation in the Tokyo International Conference on African Development (TICAD7) held in Yokohama from 28-30 August.

In Yokohama, Al-Sisi held meetings on Friday on the sidelines of the conference with CEO of Japan’s Mitsubishi Corporation Takehiko Kakiuchi on the potential projects that are expected to be carried by the company in Egypt including the Underground Metro project.

Al-Sisi further met with Natsuo Yamaguchi, the chief of Komeito party, the junior partner in the ruling coalition led by the Liberal Democratic Party in Japan

During the Saturday meeting, Al-Sisi discussed enhancing cooperation between the two countries and on how to benefit from the experience of Japan in various fields, in particular, the education.

The meeting also touched upon bolstering cooperation in the fields of trade, investment and tourism.

During his speech at the opening session of the 7th TICAD on Wednesday, Al-Sisi stressed that Japan is Africa’s oldest strategic partner, adding that their relationship is based on cooperation and promoting development efforts in the African continent.

Al-Sisi added that he hopes that the summit could come out with tangible and viable results to increase cooperation between Japan and the African Union (AU) countries.