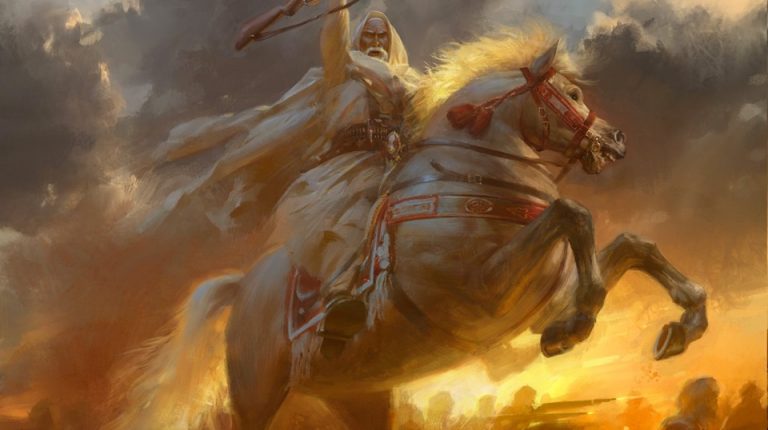 When exploring Arab and Islamic legends, one would rarely stumble upon any portrait of their facial characters or figures, despite being featured in numerous stories, authentic books throughout the years. Many of the history’s most famous names are anonymous when it comes to the way they look like, even though their characteristics were described in details in various chronicling encyclopedias, something that young artist Eslam Abo Shady aims to change. 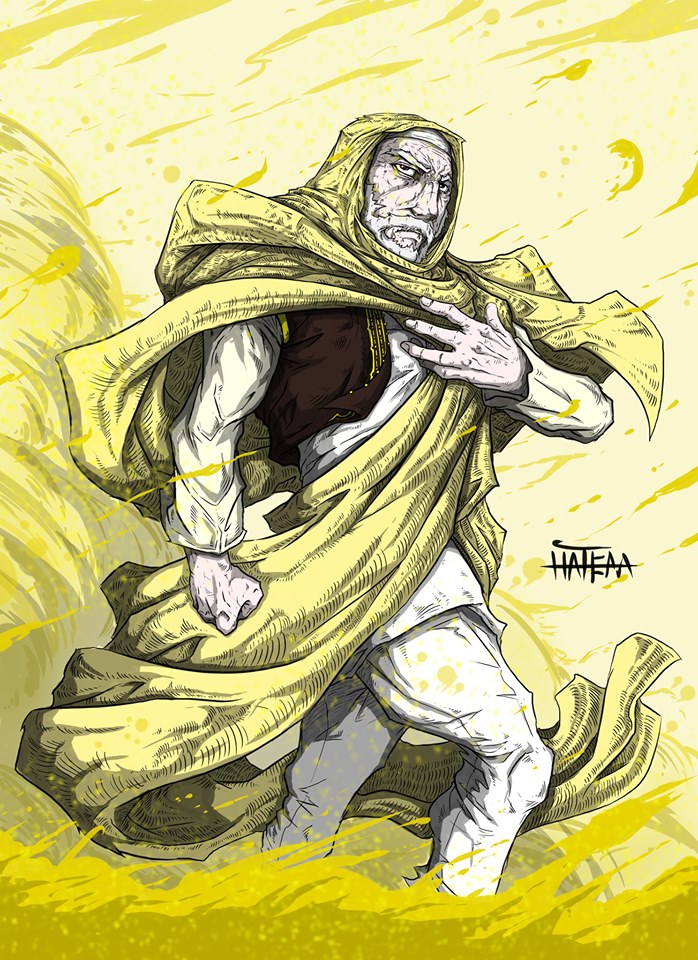 Abo Shady has always been fascinated with Arab heritage, overwhelmed with his professional career as a character creator, and driven by his vivid imagination. Hence, he was inspired to create Arabesque, a platform through which artists get to portray Arab legends using the mental image they get from reading about them.

With the help of his friend, Ahmed Nabil, they established an art hub, for talented visual artists who all gather under the umbrella of documenting each figure with every possible way.

Abo Shady started his talk to Daily News Egypt by saying: “If you search about King Arther, you would find hundreds of portraits featuring him. Even though there were no cameras at that time to capture his face, yet, artists managed to chronicle his image through their efforts, and their paintings. While if you search about Abbas Ibn Fernas, the pioneer of flying, you would rarely find any images of him.”

Abo Shady believes that most of the Arab heritage is transferred only verbally, without any art documentation to the historical veteran figures.

“We do not chronicle any of our heritage visually. It is only written in books that young generations stopped reading, so they ceased knowing about our heroic characters, and legendary ancestors,” he explained.

Through his platform, Abo Shady with the help of the thousands of participating artists aims to create a visual reference to Arab’s most famous characters to help others imagine their appearance while reading about them or discover their way of life in the past.

“These figures do not only resemble Arab’s most glorying period of times, but they are also actually the source most of the western known figures are inspired from, yet they remained hidden, leaving all spotlights, and astonishments to the others,” he pointed out.

He further added that all of Arab’s most known figures are all based on eastern portrayal, which became the reference of the Arab’s heritage.

“Aladdin is all about Arabs, yet the only image people have about it, is the one Disney portrayed in its cartoon and film, even though it does not depict Arab culture properly,” he explained. 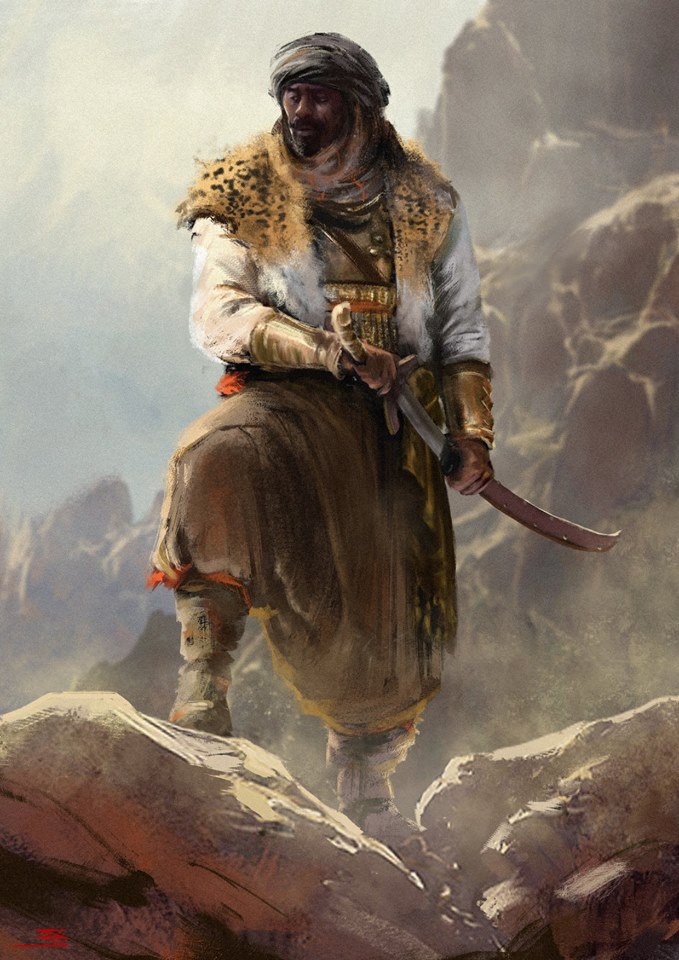 Through Arabesque, the two friends created an artistic platform for over 8,000 graphic designers and visual artists.

Every month, Abo Shady and Nabil pick a character and ask their peers to read about them, afterwards, they start drawing the selected character in any sort of art to document their features.

Myths main leads, heroes, kings and historical legends are all parts of the chosen figures who are being portrayed monthly.

“There is no certain specifications for the portrait. Characters can be cartoonish, portrayed only with their faces, bodies or in any form the artist feels like presenting,” he added.

For three years, the virtual platform has been a home for artists from all over the world who share Abo Shady the passion of visualizing the heritage.

Antarah Ibn Shaddad, the pre-Islamic era knight and poet who is known for his physical power, Sindbad the eastern sailor known for his full of adventures sea journeys, and Omena El-Ghoula, the pharaonic myth of child kidnapper, were all some of the characters the group has variously portrayed over the years. This comes along AlSeera AlHelaleyya (Taghribat Bani Hilal), the historical poets telling the story of the Bedouin tribe in their journey from Najd in the Gulf area to Tunisia and Algeria passing by Egypt, where they shaped the traditions of communities of Upper and Lower Egypt.

With their wild imagination, artists get to discover a new character every month by reading about it and spend weeks visualising the character, before they present it in the final appearance the way they imagined.

One of the things Abo Shady also aims to spread among people through Arabesque is encouraging them to read and rediscover the past, then revive it into a modernised form. As a passionate reader, Abo Shady was previously convinced that the characters he choose with Nabil to be portrayed are quite known to almost everyone else, “but I was slammed with the reality that very few people are aware of our heritage as Arabs, and that the majority who have not read about it, know nothing about it.”

Some of the characters were easy for people to imagine as they are already connected to previously through a cultural knot, like Omar Mukhtar. Dubbed the Lion of the Desert, Mukhtar was one of the easiest characters for artists to portray as they know about his story and fights throughout a film under the same name. “So it was not so hard for people to portray, however, others were not as famous as he is.” 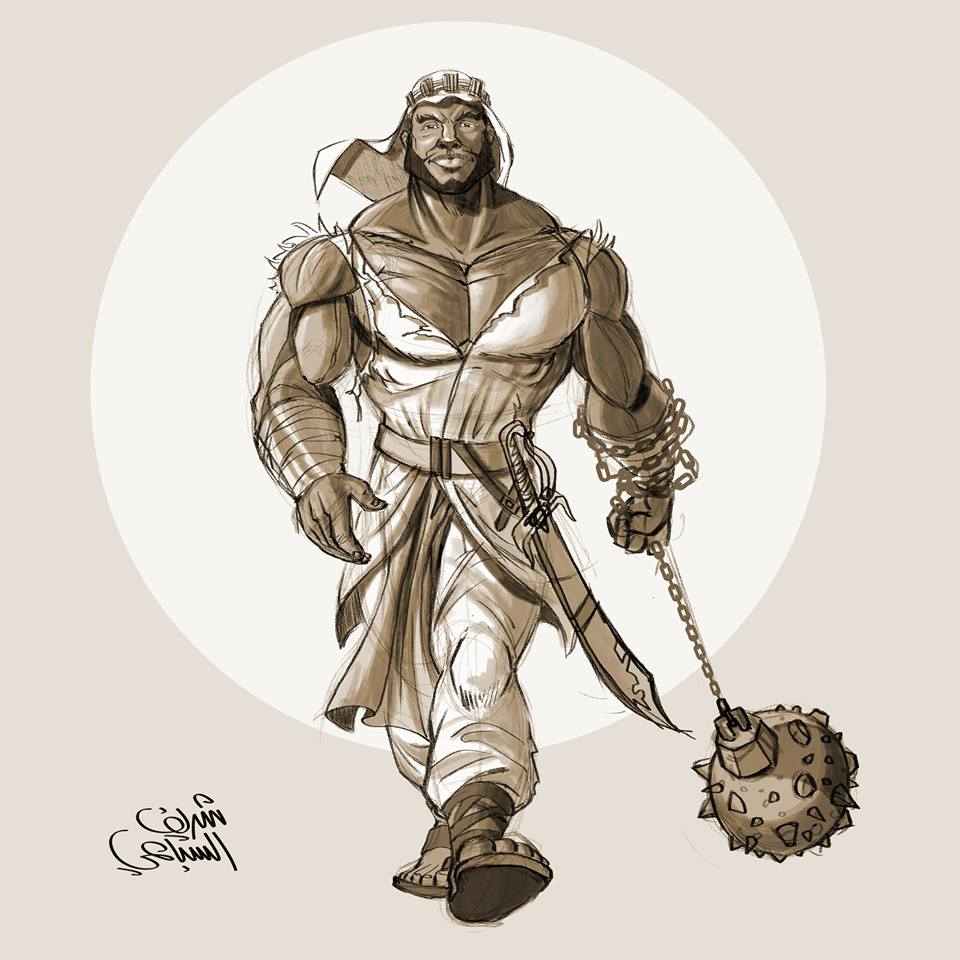 While the platform aims to encourage artists to dig into history, it is open to hosting various results of their visualized imagination.

“I was not surprised by seeing artists portraying characters in various shapes, and poses. Yet, I was met with unexpected portraits that broke all the expected limits I had!” he stated, explaining, “artists showcased the myths the way the saw them, which in some cases were the complete opposite of the mainstream belief about it.”

While Omena El-Ghoula (Mother of Ghouls) has always been transferred among generations as a terrifying character that kidnaps children who do not follow their parents’ orders, some dug deep and saw the good inside of her and portrayed her as a good calmly smiling woman.

“Eventually, it is an open platform for everybody to express how they see a certain character, limiting them into a strict mainstream idea is the complete opposite of this platform’s goal,” Abo Shady concluded.