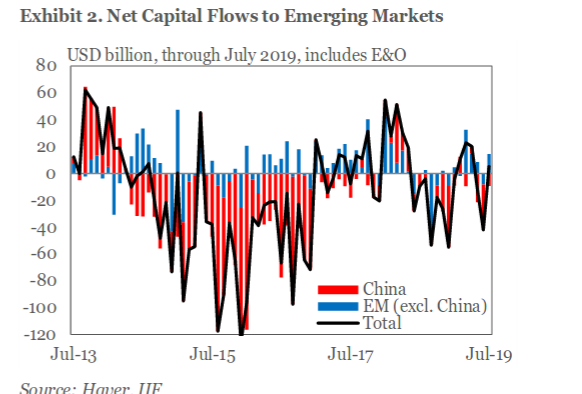 Emerging Markets (EM) stocks and bonds suffered the worst outflows since November 2016. After a relatively positive performance in July, with inflows of $24.3bn, it is estimated that investors pulled out $13.8bn from EM securities in August, according to the Institute Of International Finance (IIF) report.

The IIF added in it’s latest report on capital flows that the resurgence of the trade conflict,

combined with increased fears of a global slowdown have been the catalysts for the ongoing EM portfolio reversal.

Moreover, the IIF revealed that unlike previous outflow cycles, where the dynamics between debt and equity flows were different, August saw both equity and debt securities experience large outflows.

“Our daily flows tracker shows 18 out of 21 days with negative flows in August,” it explained further.

The IIF unveiled that the debt inflows were only $0.3bn in August, signalling a clear weakness in debt flows, which were previously supporting the overall picture, while the equity flows were -$14.1bn in August.

We believe the outlook for flows to non-China EM remains difficult, given the large amount of hot money that has already gone to EM in recent years, which we see as having resulted in a positioning overhang, a structural drag on new inflows.

Hot money is the flow of funds from one country to another to earn a short-term profit on the interest rate, while the market overhang refers to a buildup of selling pressure for stock among traders who have mostly held back due to fear of a decline in the stock’s value.

“We estimate our broader measure of net capital flows to EM (including banking and foreign direct investment flows) was $5.2bn in July, a sharp improvement from last month, which saw net outflows of $42bn,” the IIF stated.

Concerning Egypt, the IIF stated that the net capital inflows in Egypt including errors and omissions insurance (E&O) were estimated at $2.1bn during the second half of 2018 (H2).

Moreover, the Director of UNCTAD’s Investment Division James Zhan said earlier in July that Egypt maintained its position in 2018 as the largest recipient of the foreign direct investment (FDI) in Africa, with total investments worth $7.9bn, accounting for 7% of foreign investments in Africa.

Notably, the Egyptian government’s new budget aims to increase the state’s GDP by 6%, so to achieve this target more FDI flows are needed into the country.