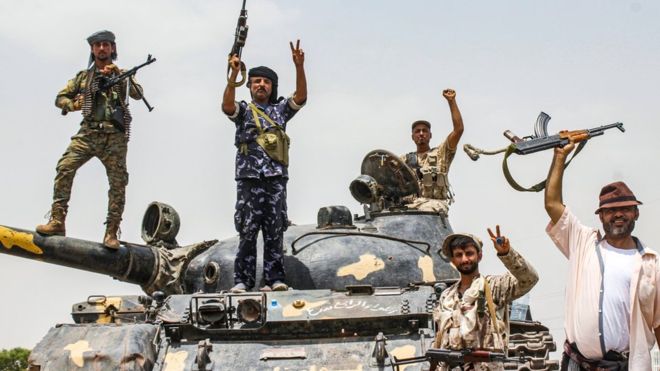 The Islamic State (IS) group on Saturday claimed responsibility for the suicide attack occurred on the outskirts of the volatile city of Aden, Yemen and killed six people belonging to the southern separatists.

On Friday, a suicide bomber on motorcycle attacked the Dar Saad district of Aden, a day after the UAE carried out airstrikes against government forces in southern Yemen.

In a statement, the UAE said it carried out “precise and direct” strikes on Thursday on what it called “terrorist militias” which, it said, had attacked Saudi-led coalition forces fighting at Aden Airport.

The Yemeni government condemned the strikes and said they killed and wounded about 300 persons from its forces and some civilians.

The separatists and the government are part of a Saudi-led coalition against the Iranian-backed Ansar Allah group “Houthi” which seized control of the Yemeni capital Sanaa in September 2014.

But separatists disagreed with the government this month, accusing it of having links to Islamists.

The dispute has exposed deep rifts in the Saudi-led coalition, with the Saudis backing the government while the UAE is funding and arming the security belt and other southern separatist forces.

Last week, the Saudi-led coalition in Yemen announced forming a joint Saudi-Emirati committee to oversee a ceasefire between UAE-backed fighters and Saudi-backed government forces in Shabwa and Abyan governorates.

Topics: Aden IS The Islamic State