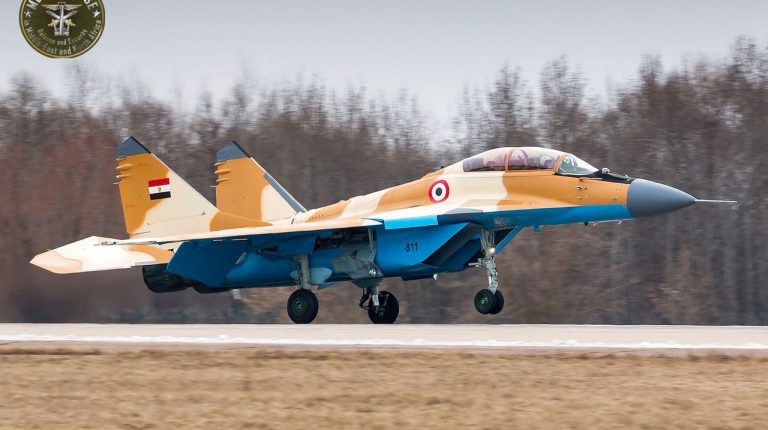 The Egyptian Air Force is preparing to acquire 50 Russian-made MiG-35 fighter jets in the largest deal of its kind between the two countries, since the disintegration of the Soviet Union, according to the US magazine National Interest.

The picture shows the first MiG-29/35 belonging to the Egyptian Air Force, explaining that the serial number of the aircraft is 811.

The US magazine noted that in November 2013, Egypt was reportedly negotiating over purchasing 24 MiG-29M/M fighter jets from Russia designed especially for the Egyptian Air Force. In April 2015, Egypt signed a $2bn deal for 50 MiG-35 fighters, which are due for delivery by 2020.

“Egypt’s current policy is to have different sources of weaponry; the current political leadership is working on a comprehensive plan to upgrade the performance of the Egyptian Armed Forces and its branches including the Air Force,” said Colonel Hatem Saber, former head of Force 777, an Egyptian military counter-terrorism and special operations unit.

Saber told Daily News Egypt that the Egyptian Air Force has acquired many Russian weapons, such as Ka-52 helicopters that are used in the two Egyptian aircraft carriers of Anwar El Sadat and Gamal Abdel Nassar.

“Receiving MiG-35 from Russia will upgrade the Egyptian Air Forces in the world ranking, which currently ranks ninth internationally and the first in the Middle East,” he added.

Back in 2015, a bilateral deal was signed between Egypt and Russia which stipulates that 46 “Black Shark” helicopters will be delivered to Egypt. It was reported that the first batch should be delivered in the summer of 2017.

The MiG-35 is an upgraded MiG-29 fighter jet, with a stronger multi-mission capability and enhanced use of high-precision air-to-air weapons. The fighting capability of the jet has increased in a remarkable way due to the increase of the fuel tank.

The fighter has the ability to carry out air and ground attack missions. The aircraft has six solid points under its wings that can carry six air-to-air missiles or smart bombs. The speed of the fighter is 2,445 km/h. It also features a 30mm automatic cannon.

The military co-operation between Egypt and Russia witnessed unprecedented progress since the arrival of President Abdel Fattah Al-Sisi to power in 2014. The new strategy of the political leadership is working on improving military relations with Russia as a step seen by number of political experts as a step toward reviving the 1960s relations between Egypt and the Russian (Soviet Union) at that time.

On the other hand, the Russian news agency Interfax reported that Russia started since the beginning of 2019 to produce Sukhoi-35 multipurpose fighter jets for Egypt.

At that time, Interfax’s report noted that the production of the Sukhoi-35 aircraft is already underway, the report quoted a Russian military source.

Similarly, the Russian newspaper Kommersant quoted military sources at the Russian Defence Industrial Complex that Moscow and Cairo had struck a deal to supply Egypt with more than 20 Su-35 fighters and ammunition. The deal costs $2bn.

The fighter jets will be delivered to the Egyptian side over 2020 and 2021, to enhance the strength of the Egyptian Air Force, especially as it is called “Queen of Fighter” because of its air control and superiority.

“Egypt will not only suffice with the MiG-35 fighter jets, it agreed with Russia to also have the advanced Su-35, and this will enhance the air force,” Saber explained.

The Su-35 is designed for air superiority. It can carry up to eight tonnes of bombs and missiles at 12 suspension points. In the air engagement, it is highly manoeuvrable and has characteristics that meet the requirements of the fifth-generation aircraft, equipped with network radar and two engines.

Their thrust can be controlled, with modern intelligent weapons that allow them to detect and destroy 10 air and ground targets simultaneously at great speed and high accuracy.

The Su-35 is a fourth-generation multi-mission fighter designed by the Sukhoi company and produced by the Irkutsk Aviation Plant.

The Egyptian-Russian recent military co-operation has stirred the anger of the US that pledged four months ago to impose sanctions on Egypt once it bought Russian Su-35 fighter jets.

In April, the US Secretary of State Mike Pompeo pledged during a Senate budget hearing session that the US would impose sanctions on Egypt once it bought Russian Su-35 fighter jets.

The US official warning to Egypt stipulated that the arrival of the Su-35 jets to Egypt is violating the US CAATSA (Countering America’s Adversaries through Sanctions) act.

At that time, Pompeo said the US has received assurances from Egypt that Egyptian authorities are aware of these terms.

“We’ve made it clear that if those systems were to be purchased, the CAATSA statute would require sanctions on the regime,” Pompeo said at a Senate budget hearing.

According to the CAATSA act issued in 2017, Iran, North Korea, and Russia are facing sanctions with the aim of combating those countries’ political, economic, and military influences across the globe.

“I’m very hopeful that they will decide to not move forward with that acquisition,” Pompeo said while discussing the reports on 20 Su-35 fighter jets’ deal between Egypt and Russia.

According to statements by the head of the Russian Federal Military-Technical Cooperation Department, Dmitry Shogayev, the Su-35 has also caught the eyes of Turkish officials as both countries are now discussing the possibility of signing a deal to buy the Su-35 and Su-57 fighter jets.

The Russian state-run news agency RIA Novosti noted that Shogayev asserted that Russia will start negotiations with the Turkish counterpart on vital topics, including S-400 systems, beside the possible supply of Su-35 or Su-57 fighter jets.

Egypt is surpassing Turkey, Israel, and Iran in terms of Air Force ranking, to be the strongest in the Middle East and North Africa (MENA), according to Global Firepower (GFP).

The website clarified that Egypt has 1,092 aircraft, beating Turkey that owns 1,067 aircraft and Israel with 595 aircraft. The GFP ranking explained that Israeli Air Force is the 18th globally, while Turkey came 10th.

Saudi Arabia followed Egypt in the ranking in the MENA region, then Algeria in third place, and the UAE in fourth place.

Tensions between US, China intensify