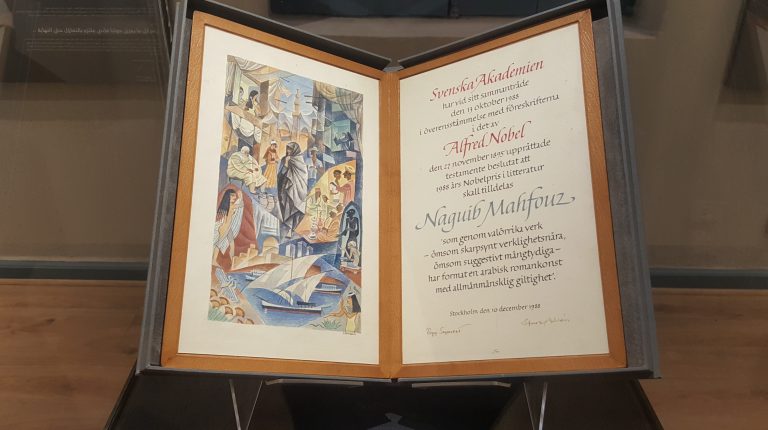 Commemorating his 13th death anniversary which fell on Sunday, the Cultural Development Fund, affiliated to the Ministry of Culture, is organising a temporary exhibition of Nobel laureate Naguib Mahfouz.

Named “Mahfouz and the Official Seal”, the one-week exhibition showcases some of Mahfouz’s official documents which he obtained throughout his life.

The exhibition is being held at Naguib Mahfouz Museum, which was inaugurated in July, at Al-Gamaleya district, putting on display documents that will see the light for the first time.

The exhibition showcases 70 official documents that were highlighted in journalist Tarek Taher’s latest book that hold the same name of the exhibition.

The great novelist’s school and academic certificates until his graduation in the Faculty of Arts, are among the displayed documents in the exhibition.

It further puts Mahfouz’s official hiring letters under the spotlight, including his letter of assignment as the head of the Egyptian institution for cinema, as well as the reports he wrote in his career as the head of the Central Authority for the Censorship of Works of Art (CACWA), and the main decisions he took while he help this post. 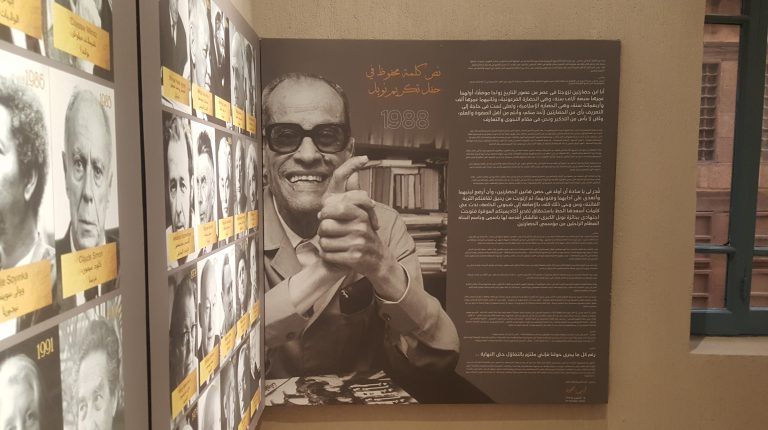 The exhibition also brings to public Mahfouz’s property statement and the secret reports of his work in the mentioned positions.

The exhibition runs along some of Mahfouz’s belongings at his museum that was once known as Muhammad Bek Abu El Dahab Complex which was built in 1774 during the Ottoman Empire.

The antique building is listed as one of the country’s heritage buildings. With the cooperation of both the ministries of antiquities and culture, it was turned into an official museum of the late writer where all his belongings were put on display.

The museum is located in the place where Mahfouz was born, and got the inspiration that was always reflected in his novel. From this neighbourhood, he brought the world one of its most astonishing masterpieces, that chronicled the area of Old Cairo, like Bayn El Kasrain “Between the Two Palaces”, a trilogy that chronicled Egyptian society in the 1920s.

The minister of culture previously stated at the opening of the museum that all the showcased belongings were gifted from Mahfouz’s daughter, Om Kalthoum, to the ministry of culture.

The museum also contains four main libraries: Mahfouz’s personal library that has the 1,091 books he owned all of his life and spent his time roaming among them, a literary library that offers visitors 119 of the world’s most known and famous literature, a third library of Mahfouz’s 169 art masterpieces, and the fourth is a general one with 165 books in different fields.

It further documents all the phases of Mahfouz’s lifetime, including his assassination attempt. At the dream of departure hall, there are the incidents of the two Islamists who stabbed him in the neck. They aimed to kill him for his controversial novel, Awlad Haretna (Children of Gebelawi). This led to a permanent disability causing him to be unable to write except for a few minutes every day.

In 2006, Egypt bid farewell to the great novelists who passed away at the age of 96.