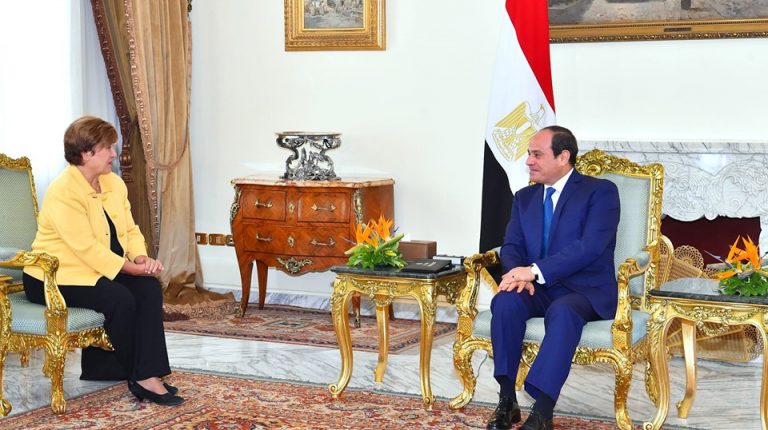 Egyptian President Abdel Fattah Al-Sisi received Kristalina Georgieva, CEO of the World Bank (WB), on Tuesday in the first stop of her foreign tour to mobilise support for her candidacy as the International Monetary Fund (IMF) Managing Director.

Georgieva said she chose Egypt based on the Egyptian economic reform success story, in cooperation with the IMF, over the past three years. She praised Egypt as a role model for economic success stories, adding that the positive results achieved are reflected in increased GDP growth rates, economic stability, and improved business climate.

Al-Sisi also expressed his appreciation for Georgieva’s visit, and her keenness to meet with the Egyptian government as a candidate for the IMF top job, plus her interest in presenting her vision on the IMF’s future relations with Egypt, Africa, and developing countries.

Kristalina Georgieva, the Bulgarian chief executive of the WB, has been picked as Europe’s choice to lead the IMF. The final decision, should it be approved by the fund’s board of governors in the coming weeks, while the deadline for IMF hopefuls to enter the race to become managing director closes on 6 September.

The president stressed Egypt’s full support to improving cooperation with the IMF as a strategic partner, to achieve comprehensive economic development in Egypt, and in the African continent, through the establishment of development projects.

Accordingly, Georgieva said that the IMF’s work in the coming period should include encouraging developed countries to adopt open economic policies, that would facilitate trade and investment.

Georgieva is an internationally respected economist and former EU commissioner, and she is the frontrunner to succeed Christine Lagarde at the IMF Managing Director after the latter became the European Central Bank president-elect.