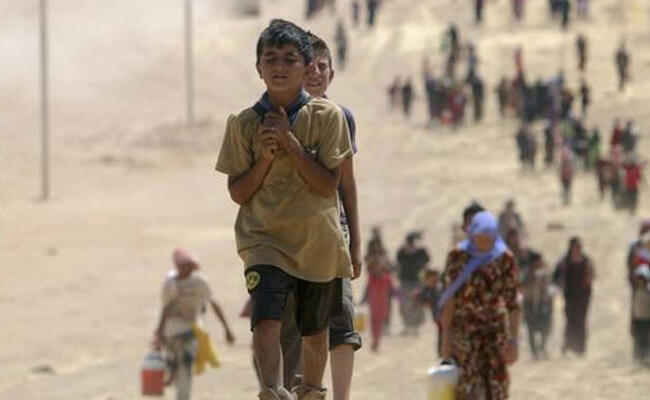 In a step that reflects the Turkish government’s refusal of the presence of the Syrian refugees in the country, the Turkish army stationed along the border with Syria on Friday and fired tear gas to disperse a demonstration involving hundreds of Syrians on the Syrian side of the border who protested the Turkish strikes on Idlib province in north-western Syria. 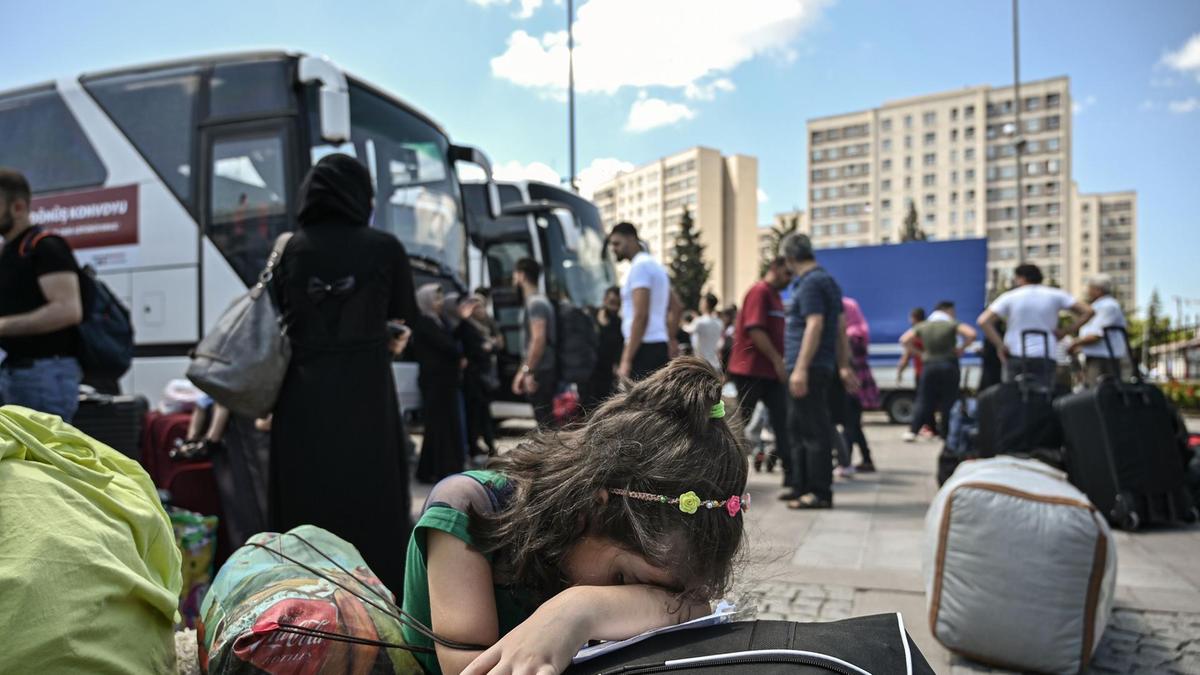 Some protestors tried to break through the Bab al-Hawa border crossing, according to an AFP reporter.

Hundreds of protesters gathered near Bab al-Hawa crossing, shortly before Russia announced a “unilateral ceasefire,” on Saturday morning in this area of north-western Syria.

Turkey, known as a primary sponsor of some armed groups in Syria, has demanded a cessation of hostilities for fear of a humanitarian crisis that could cause a new influx of refugees toward its borders.

Since late April, offenses carried out by the Assad regime and his Russian ally led to the death of more than 950 civilians in Idlib, according to the Syrian Observatory for Human Rights. While more than 400,000 people have been displaced, according to UN.

Idlib, with a population of about three million people, is under the control of the Hayat Tahrir al-Sham (HTS) militant group, a former branch of Al-Qaeda.

On Friday, Russia called leaders of militant groups to abandon provocations and join the process of peaceful settlement in the areas they control.

In response to the protests, Turkish President Recep Tayyip Erdogan said that Syrian demonstrators stormed the Bab al-Hawa border crossing and entered the Turkish territory to demand a halt to the shelling of civilians by the Assad regime and his Russian ally.

“Developments in Idlib are unacceptable and we are taking all measures to protect our interests,” Erdogan said in a press statement after Friday prayers.

“There is a new wave of refugees from Idlib, because of the ongoing hostilities there, starting to move toward Turkey,” Erdogan added.

In the same context, Turkish Foreign Minister Mevlüt Çavuşoğlu said the Turkish army will leave Syria when a political solution is found, pointing out that the Assad regime does not believe in the political solution at the moment.

Speaking to reporters in Oslo, Çavuşoğlu warned that ongoing attacks by Assad’s forces and their militia in Idlib could cause another wave of Syrian refugees to flee to Europe.

He noted that Russia had assured Turkey that Turkish checkpoints in north-western Syria would not be attacked by Syrian regime forces.

On Wednesday, Syrian regime raids targeted the perimeter of the Turkish observation post in Sher Maghar in the northern countryside of Hama, but there were no casualties among Turkish soldiers.

Meanwhile, Erdogan said that Turkish forces were on alert at the 12th checkpoint in northern Syria, located in Maar Hatat town near the city of Hayesh in the southern countryside of Idlib.

The Russian Ministry of Defence announced that the Syrian regime forces will abide by the unilateral ceasefire in Idlib, starting from Saturday.

The Turkish authorities had announced that thousands of Syrian refugees in Istanbul, which is the largest Turkish city, had until 20 August to leave the city. 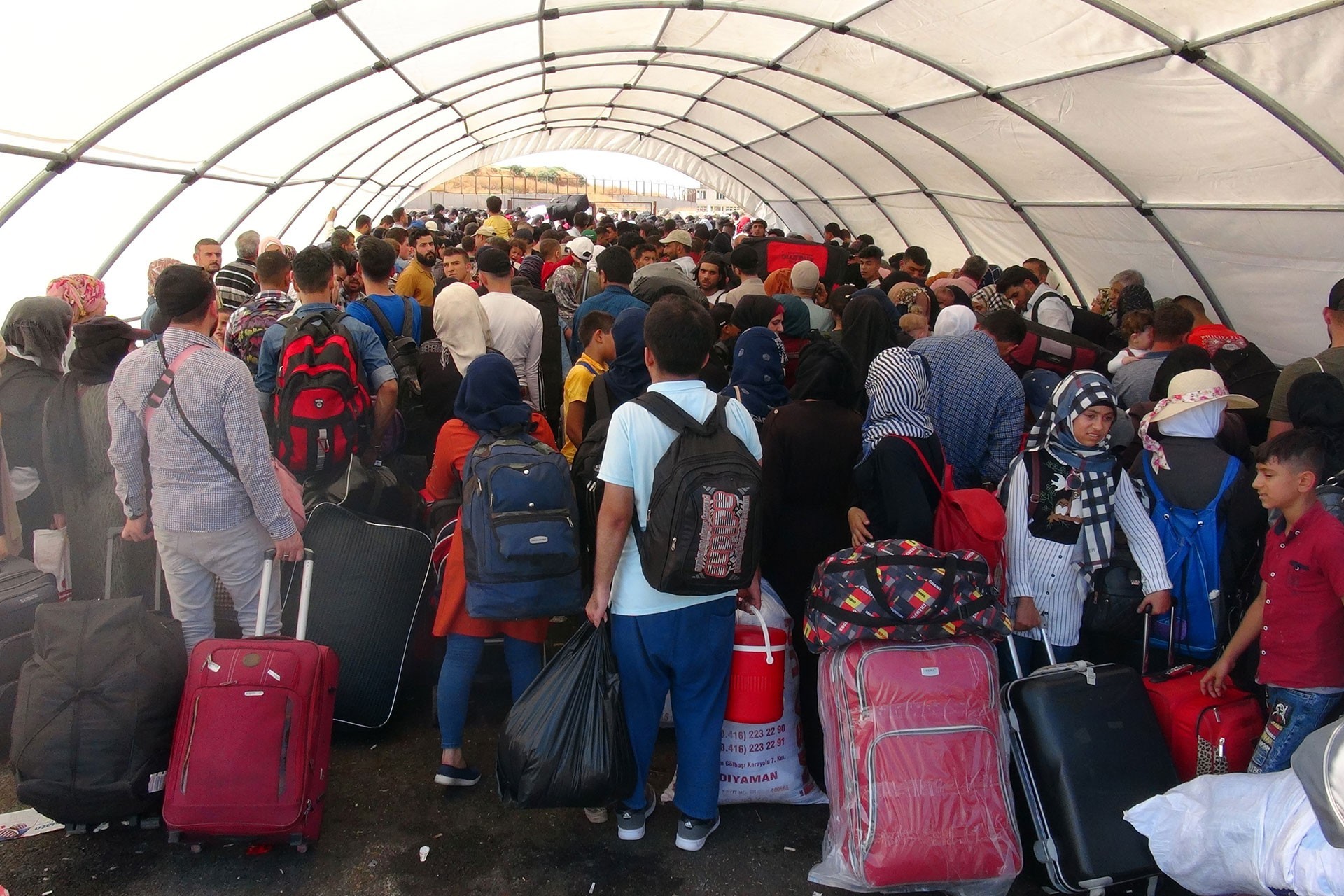 Istanbul authorities say that this decision was issued in July and gave Syrians living in Istanbul enough time to settle their situation and return to the states where they were registered upon the order of the Turkish Interior Ministry.

It justifies the decision as a step toward easing the pressure migrants are putting on the city.

However, some human rights organisations question the Turkish justification and say that some Syrians are forced to return to their country, and some have been deported to war-torn areas in Syria.

The issue of Syrians living in Turkey has become one of the most controversial issues in public opinion in Turkey in recent years.

Discussions intensified following the announcement by the Istanbul municipality of a large-scale campaign against illegal migration.

Since the outbreak of the 2011 popular uprising that later turned into an armed conflict and civil war, Syrian refugees have flocked to Turkey under temporary protection status (a special status granted to nationalities of some countries suffering from the impact of wars or natural disasters).

In July, the number of Syrian refugees registered in Turkey reached 3,649,750 people, according to a statistic from the General Directorate of Immigration at the Turkish Ministry of Interior.

They constituted the broadest category of Syrian presence in Turkey which has been steadily increasing annually since 2011.

Temporary protection status excludes Syrians in good economic standing who have been granted residence in Turkey. About 99,643 Syrian refugees, according to a statistic issued from the Turkish General Directorate of Immigration in 2018, are representing the second category of Syrians in Turkey.

The category of people living under temporary protection is considered the largest among Syrians in Turkey.

The third category of Syrians living in Turkey is the category of illegal migrants. It includes those who entered the country illegally, or violated entry laws or visa periods.

Turkish authorities require Syrians to register their names when entering to the country if they are seeking temporary protection status.

According to statistics from the Turkish General Immigration Department on 14 August, a total 21,988 illegal migrants have been arrested this year. 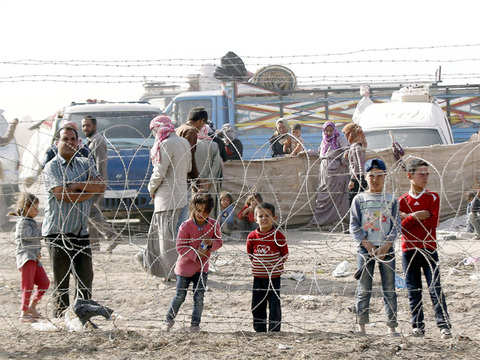 A report from the Turkish opposition Republican People’s Party (CHP) on “migrant workers” in Turkey claims that about 1 million Syrians work illegally in the country.

The report notes that many of these employees work in harsh conditions with very low wages in agriculture, food industries, manufacturing, and construction sectors.

The report says that one in five Syrian informal workers are children under 15.

In response to accusations addressed to Turkey on the forced deportation of Syrian refugees, the head of communication department in the Turkish presidency, Fakhruddin Altun, asserted that these allegations are “just nonsense”, and that his country rejects the accusation that Syrian refugees are facing the risk of deportation.

Altun said in an article he wrote to Foreign Policy magazine, published on Friday evening, on Turkey’s policy toward Syrians, that Turkey has adopted since 2011 the policy of “open door” for Syrians displaced from their land, and opened its doors to about 3.6 million refugees.

He stressed that during the same period, Jordan received 1.4 million people, while the United States only accepted 18,000 people, pointing out that his country granted citizenship to more than 100,000 Syrian refugees, and spent $40bn on war victims.