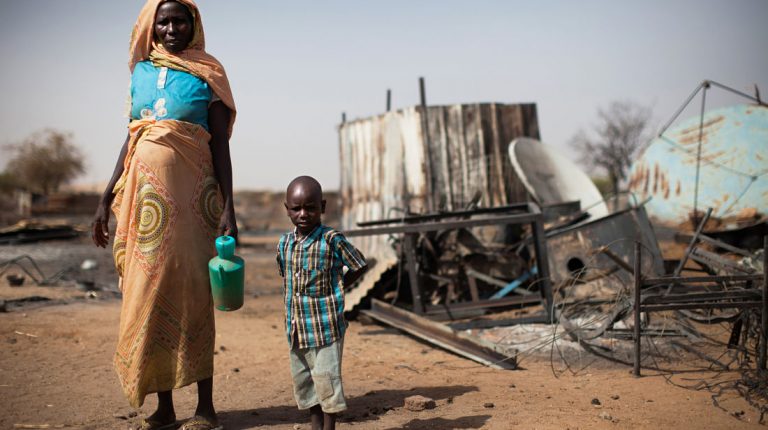 While the richest Africans get even richer, extreme poverty in the continent is rising, according to a report, called “A Tale of Two Continents,” issued by Oxfam on Tuesday.

The report shows how rising and extreme inequality across Africa is undermining efforts to fight poverty.  Africa is the second most unequal continent in the world, and home to seven of the most unequal countries. The richest 0.0001% own 40% of the wealth of the entire continent.

The report highlights how Africa’s three richest billionaire men have more wealth than the bottom 50% of the population of Africa combined, approximately 650 million people.

Meanwhile, Africa is rapidly becoming the epicentre of global extreme poverty. While massive reductions in the numbers living on less than $1.9 a day have been achieved in Asia, these numbers are rising in Africa. The World Bank estimates that 87% of the world’s extreme poor will be in Africa by 2030, if current trends continue. African women and girls are most likely to be poor. Levels of gender inequality are among the highest in the world, combining with economic inequality to create a suffocating web of exclusion.

No economic recovery on site in sub-Saharan Africa

According to Oxfam’s report, economic prospects for Africa are poor. The report cites, IMF forecast that 24 of the 45 sub-Saharan African countries, including South Africa and Nigeria, are not likely to see a strong economic recovery.

Above all, unsustainable debt has returned to squeeze the populations of Africa. “While there have been some exceptional individual cases, there is great risk of a continental crisis that will undermine development for the next decade, while population growth increases,” the report added.

The report cites Uganda as an example, where debt repayments have reached historic highs, and the government has cut spending on education and health by 12%.

However, the story is not uniformly bad. The report indicates that many countries in Africa are taking positive steps to tackle inequality.

“The fact that they are doing so in the face of long odds and huge challenges is a tribute to them, and shows up the many countries that are simply failing to do what they should,” the report stressed.

This report uses the Commitment to Reducing Inequality- Reducing Inequality Index (CRI) Index developed by Oxfam and Development Finance to produce a ranking of African countries on their policies to reduce the gap between rich and poor, looking at taxation, social spending, and labour rights.

“African countries cannot do it alone. They are operating in the face of a global financial system of falling aid, expensive debt, and tax avoidance that is depriving them of billions of dollars in lost revenue each year. It is estimated that 75% of the wealth of African multi-millionaires and billionaires is held offshore, and that the continent is losing $14bn annually in uncollected tax revenues as a result,” the report explained.

Moreover, Oxfam highlights that to truly turn things around, global solidarity and action is required from governments and institutions around the world.

However, African countries can individually take action to review, renegotiate or cancel tax treaties that expose them to profit-shifting and treaty shopping, and collectively pursue a minimum effective tax rate for the profits of multinationals in the Organisation for Economic Co-operation and Development (OECD) process.

The report indicates that if multinationals will have to pay the minimum rate, it becomes less attractive to allocate profits to low-tax jurisdictions. Rich nations must end the theft of resources from Africa, and the rigging of the international financial system that facilitates this.

Seven of the 20 most unequal countries by income are African – including the four most unequal: Swaziland, Nigeria, South Africa, and Namibia.

The report indicates that Africa’s most unequal country in the region, Swaziland, is home to one billionaire, Nathan Kirsh, who is estimated to have $4.9bn. “If he worked in one of the restaurants that his wholesale company supplies on a worker’s minimum wage, it would take him 5.7m years to earn his current level of wealth,” the report explained.

Despite the fact that Nigeria is Africa’s biggest economy – in GDP terms – yet the fruits of its economic growth are not shared equally.

Poverty and destitution are stubbornly high: around 10 million children are out of school, a quarter of citizens lack access to safe drinking water, and half are living below the $1.90 poverty line, according to Oxfam.

To end poverty in Nigeria, it is estimated that $24bn would be needed, the report explained, adding that it is less than the combined wealth of the richest five Nigerian.

Oxfam states that the roots of inequality in Africa go a long way back, and include the exploitative practices and institutions forced on much of the continent by the colonial powers that concentrated political and economic power into the hands of the few.

The report indicates that after the debt crises of the 80s and 90s, Africa was subjected to rapid market liberalisation under structural adjustment programmes.

“Deregulation, public spending cuts, privatisation, tax cuts for the rich and corporations, and a ‘race to the bottom’ on labour rights entrenched inequality further, and increased poverty and hunger in many countries,” the report added.

For example, between 1996 and 2001, the number of Zambians living below the poverty line rose from 69% to 86%; in Tanzania, inequality rose by 28%. By 2013, 50 million more people in Africa were undernourished compared to 1990–2. Growth models focused on extractive industries, such as those in Nigeria and Zambia, have also been shown to lead to higher levels of poverty and inequality. In Zambia for instance, copper mining is a major contributor to GDP, but employs only around 1.6% of the labour force. The communities in rural mining areas remain poor.

The battle against inequality requires the adoption of different policies. Accordingly, the report uses the CRI developed by Oxfam and Development Finance to produce a ranking of African countries on their policies to reduce the gap between rich and poor, looking at taxation, social spending, and labour rights.

Such policies include; spending on education, health and social protection, which can have a huge impact on reducing inequality.

A European Commission study of sub-Saharan Africa highlighted the unequivocal power of education as a tool to reduce income inequality; they found that schooling raised the income share of the bottom 80%, mainly at the expense of the top 10%.

The report showcases South Africa, where everyone over 60-years-old receives a pension, except the very richest. The majority of recipients are women, and it has a major impact on inequality, reducing it by 22%.

Another important policy is progressive tax systems, as they directly reduce the gap between rich and poor by taking more money from those who can afford to pay, and they also raise revenue that can be invested in social spending.

Oxfam’s research has found that, if low-and lower middle-income countries worldwide achieved a 2% increase in domestic resource mobilisation by 2020, this would add $144bn to their budgets.

Egypt came in 16th place in the ranking of African nations by their commitment to tackle inequality, while South Africa topped the list, and Nigeria came in the 45th and last place.