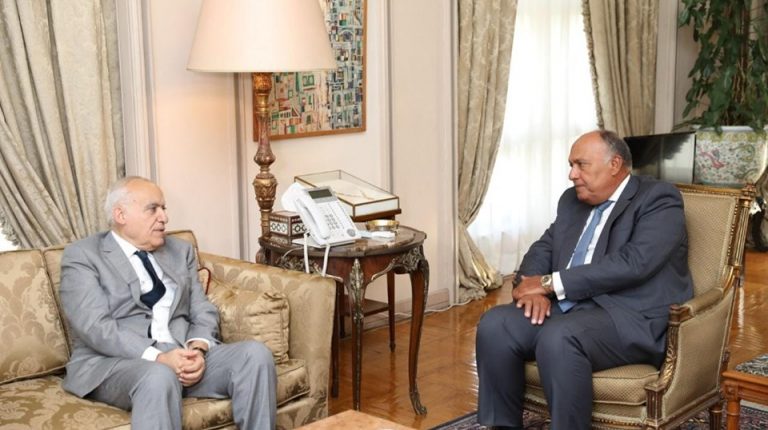 Egypt’s Foreign Minister Sameh Shoukry received Ghassan Salamé, head of the United Nations Support Mission in Libya (UNSMIL), in Cairo, according to a Monday statement by the ministry.

During the meeting held on Monday, both addressed recent updates in Libya and solutions to end the crisis in the war-torn country.

Shoukry asserted the Egyptian stance to reach a comprehensive political settlement to end the crisis in Libya, in a manner that maintains the unity and the safety of the North African country.

This resolution must contribute to combating terrorism and extremist groups, as well as restoring security to allow Libyan people to control its resources, Shoukry stated.

Salamé stressed the importance of the Arab League’s role in finding a lasting political solution in Libya, according to the United Nations Support Mission in Libya (UNSMIL).

Aboul Gheit welcomed the envoy’s efforts in reviving the political process in the war-torn country.

The UNSMIL said that such attacks represent “a direct threat to the lives of civilian passengers,” calling for an immediate cessation of attacks against this vital facility and all civilian infrastructure and properties.

Since the fall of Gaddafi, Libya has remained in chaos and is divided between two governments. The oil-rich country has been suffering from a financial crisis due to clashes between militias and forces loyal to these governments.

In April, Libyan National Army leader, General Khalifa Haftar, whose forces control much of the east and south of Libya, launched an offensive to seize Tripoli, the base of the Government of National Accord. Since the offence began, 443 people have been killed and 2,110 injured, according to the World Health Organization.