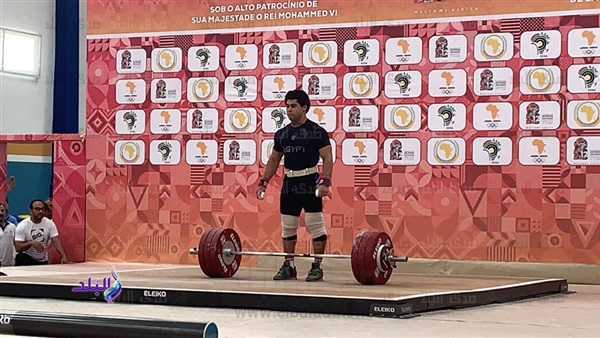 Egyptian weightlifter Khedr El-Tony is so well-known for the people living in Cairo, Alexandria, and Helwan. The great athlete made an impressive achievement at the 1936 Summer Olympics in Berlin. He won two gold medals, leaving the German leader Adolf Hitler fascinated. The strongest man in the world, at the time, defeated German champions and broke world records that have stood over half a century in the weightlifting.

Over its history in Olympic Games, Egypt won 31 medals only, of which 14 medals achieved in weightlifting. Interestingly, Egypt has only seven gold Olympic medals since the start of the Olympic Games in Stockholm in 1912, of which five medals went to weightlifters. It shows that the Egyptian weightlifters’ sweeping dominance in the 12th African Games held last month in Rabat was not a surprise.

In Rabat, Egypt won 273 medals, including 56 medals in weightlifting alone. This also includes 31 gold out of 102 golds achieved by Egypt, in a clear confirmation of the excellence of the Egyptian weightlifters.

The weightlifting success also includes five bronze medals, by Neama Saeed (two medals) and one medal by each of Israa Ahmed, Salma Farag, and Mohamed Sayed.

Mohamed Mahgoub, head of the Egyptian Weightlifting Federation, told Daily News Egypt, “Good preparations, discovering young talents, and the support of sponsors as well as the Ministry of Youth and Sports for players have all stood behind this great achievement.”

“So far, we have received EGP 4m from the Ministry of Youth and Sports to make the players ready for the Tokyo Olympics, and this has played an important role in preparing 20 players,” he added.

He continued, “Our ambitions in the 2020 Olympics have increased thanks to good preparation and increased spending, In Rio de Janeiro, we got two bronze medals where nine players participated. In Tokyo, the qualification system has changed and we cannot have more than four players. We hope to improve our results and win more medals.”

“The tournaments qualifying for Tokyo Olympics will end in April 2020. We are currently preparing for the World Championships in Thailand (18-27 September), with another tournament left.”

“At the African Games, there were players who excelled and I was very pleased with their performance, such as Karim Kahla, who achieved new records, as well as Rania Ezzat, Halima Abdel Azim, and Samar Habashy,” Mahgoub said.

He concluded, “Winning a medal is no longer a stroke of luck. We must prepare well to compete with other countries. I hope the great achievements in African Games can grab the attention of sponsors to support individual sports.”

Moreover, Mohamed Adel Hosny, chairperson of the Royal Sports Investment Company which sponsors the Egyptian Weightlifting Federation, said he was delighted with the Egyptian achievements in the African Games in Rabat.

Hosny told Daily News Egypt, “We are proud of the great achievements by the Egyptian weightlifters in the African Games. They won 56 medals, 31 gold, 20 silver, and 5 bronze.”

He added, “We aim to repeat these achievements in the Tokyo Olympics. We have great confidence in our players in weightlifting and the modern pentathlon to win Olympic medals, which was our main motivation to sponsor the two federations.”

Mohamed Gad, CEO and managing director of the company, said, ‘Weightlifting’s winning of one-third of Egypt’s gold medals in Rabat underlines the important role played by our company in the development of individual games, with the support of the state institutions.”

Gad called on private companies to support and sponsor individual sports as they made great achievements on the continental and global levels.

He stressed that the company will continue to support the weightlifting and modern pentathlon federations in order to continue their success in the 2020 Tokyo Olympics.