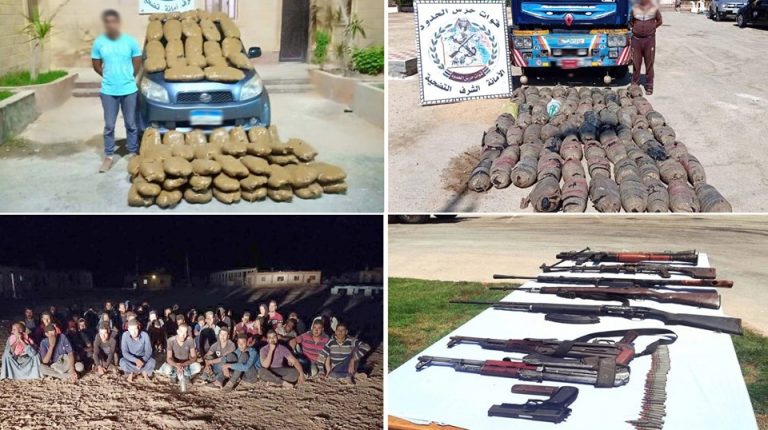 Egyptian border guards managed on August to seize 30 kg of hashish, 309,000 illegal drug pills, 2 tonnes of cannabis in Central Sinai where a patrol was able to discover and destroy a cannabis farm.

According to a statement from the army’s official spokesperson, Tamer El-Refaie the sweeping operations conducted by the Egyptian border guard forces led to the seizure of two RBG launchers, a sniper rifle, two automatic rifles, two multi-machine guns, two cartridge guns, a pistol, and 98,000 rounds of different calibres.

In addition, they seized 95,000 smuggled cigarettes and 3,400 packets of medicines and cosmetics that are not free of custom duties.

On the illegal immigration operations, border guard forces succeeded in thwarting illegal infiltration and cross-border migration of 217 individuals of different nationalities on various border parts of the state.

Also, 76 vehicles used for infiltration and smuggling were seized, while 58 smugglers were arrested and are to be referred to the competent authorities to take necessary legal action against them.

Army and police forces in Egypt are engaging in a wide-scale militant operation launched due to the presence of Islamic State (IS) in North Sinai since February 2018. The operation aims to get rid of the IS affiliated group of ‘Sinai Province” that has been previously known as ‘Ansar Byat El Maqdus’ group and became ‘Sinai Province’ in 2014 after declaring its affiliation to IS.

Since the start of the ‘Sinai 2018 Comprehensive Operation’, the rate of the militant attacks conducted by IS against the army, police, and civilians has declined due to many counter attacks performed by the army against militants’ posts and hideaways.